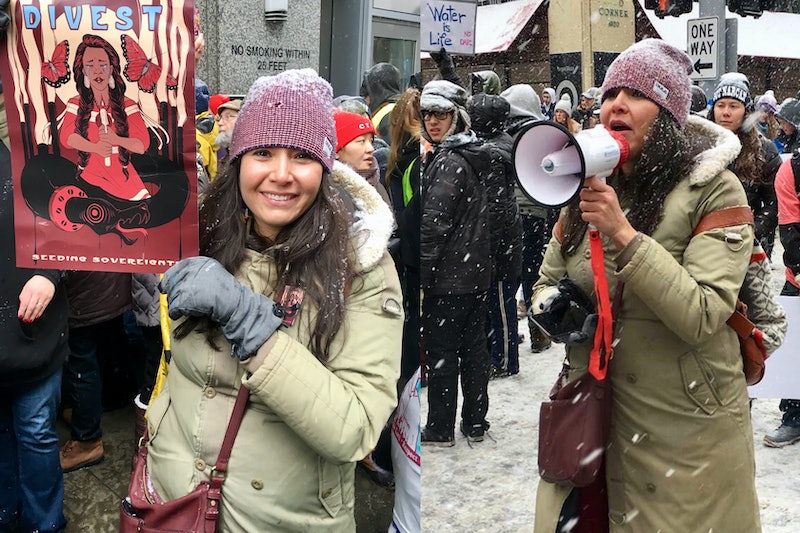 In this op-ed, Christine Nobiss, MA, Plains Cree/Saulteaux of the George Gordon First Nation, and decolonizer with Seeding Sovereignty, discusses how indigenous women have been fighting against the expiration of the Violence Against Women Act (VAWA), and how the issue impacts all women. To learn more and support our work, please visit www.seedingsovereignty.org.

On Friday, Jan. 25, President Trump announced that he and congressional leaders had “reached a deal” to reopen government agencies until Feb. 15, while lawmakers work out a homeland security package that satisfies his campaign promise to fund a controversial and expensive border wall. This shutdown was the longest in U.S. history and has been called a shutdown of government for the poor, as many programs championed by conservatives, like the military and the oil and gas industry, have not been affected.

One alarming consequence of the shutdown was the expiration of the Violence Against Women Act (VAWA). VAWA, originally passed in 1994, was started as an effort to equip law enforcement and the court systems with resources to respond better to domestic violence. However, over the past 25 years, advocates have reshaped the act to recognize that, for many people, “accessing safety and justice is harder because of their race, ethnicity, immigration status, age, disability, sexual orientation, or gender identity.” For instance, the 2013 reauthorization of this act afforded special “provisions to undocumented immigrants to claim temporary visas and extended protections to the LGBTQ community and Native Americans.”

For Indigenous women in particular, VAWA’s expiration was an enormous blow. A National Institute of Justice study reported that 56 percent of Native American and Alaskan Native women experience sexual violence in their lifetimes, and 97 percent of Indigenous women will experience violence at the hands of a non-tribal member. On some reservations, Native women are murdered at more than 10 times the national average and are missing at rates much higher than any other demographic in the country. Many tribal nations and national and local organizations rely on VAWA grants to fund domestic violence and sexual assault prevention programs, women’s shelters, national coalitions, and trainings to combat the missing and murdered Indigenous women crisis. Even with the expansion of VAWA over the past 25 years, experts say these astonishing statistics still underestimate the number of women affected by violence because the infrastructure for them to report and handle incidents is underfunded.

Officially, VAWA has been extended to Feb. 15, thanks to the preliminary funding, but advocates want a long-term reauthorization as soon as the government recovers from the shutdown. The fact that such an important piece of legislation lives in constant funding limbo is a testament to what this country’s political system chooses to prioritize. As Kate Thayer reported for The Chicago Tribune, “While some local social service providers say they are optimistic the act eventually will be reauthorized, they worry about funding being in flux every year for programs that serve as a safety net for victims — and the message that sends.” And though VAWA is funded for the fiscal year 2019, Trump's lack of long-term support is still evident as, after two years, he has still not appointed a permanent director for the the Office of Violence Against Women.

On top of VAWA's lack of long-term reauthorization, in April 2018, the Trump administration quietly restricted the Department of Justice’s definition of domestic abuse and sexual assault that had taken 25 years to expand. Under Obama, it explicitly included “emotional, economic, or psychological actions or threats of actions that influence another person,” in addition to physical or sexual abuse. Now it simply says, “The term 'domestic violence' includes felony or misdemeanor crimes of violence committed by a current or former spouse or intimate partner of the victim,” making it more difficult for survivors of psychological abuse to seek help. This news, though not surprising, is very troubling to many who have worked hard to realize the insidious and varied nature of abuse that women suffer every day. Some even say that this new definition has set back women's rights and safety by 50 years. To narrow the scope of domestic violence and sexual assault and to continuously disregard the need for a long-term authorization of VAWA is to condone violence against women, and the continued genocide Indigenous people face every day.

A sign displayed at the Feb. 14, 2018 vigil for missing and murdered indigenous women in Seattle.

I see the Trump administration’s assault on the rights and protections of marginalized groups is a symptom of a deeply misogynistic, racist, homophobic, xenophobic, and Christian extremist nation that is run by a government that privileges a patriarchal view. However, the recent elections of Deb Haaland (Pueblo of Laguna) and Sharice Davids (Ho-Chunk Nation) to Congress are a huge step toward in combating this agenda. They are the first two Native American women to be elected to Congress, and Davids is the first ever lesbian representative to be elected in the state of Kansas. Haaland and Davids, along with an influx of Indigenous state representatives like Ruth Anna Buffalo (Mandan, Hidatsa, and Arikara Nation), have pledged to overcome the recent blockage of Savanna’s Act, an act named for Savanna LaFontaine-Greywind (Turtle Mountain Band of Chippewa and Spirit Lake Nation), who was murdered in North Dakota in 2017. This proposed act, along with the SURVIVE Act and other pieces of legislature, were written to improve safety in Native American communities by strengthening public safety laws and providing more resources for victims of violent crime.

Accessing safety and justice is only a part of the crisis that Indigenous people face. This population is under constant assault to their land, bodies, and cultures, living at the front lines of conflict, where colonial capitalist forces are violently extracting resources from the land and disregarding the brown people who live on it in the process. But tolerance for this disregard is slowly falling away, as marginalized groups unite and demand justice. This effort takes unity and an increased understanding that those living on the front lines of these issues, like Indigenous women, need to be seen, heard, and protected.

Correction: A previous version of this article misstated the percentage of Native American and Alaskan Native women who experience sexual violence in their lifetimes. It has been updated to include the correct information.

More like this
5 Ways To Stand In Solidarity With Women In America From The UK
By Sophie McEvoy
How To Fight For Reproductive Rights, Based On How Much Time You Have
By Courtney Young
34 Quotes That'll Inspire You On Juneteenth & Beyond
By Syeda Khaula Saad and Siena Gagliano
How Getting An Abortion Has Changed From The ’60s Through Today
By Amanda Chatel
Get Even More From Bustle — Sign Up For The Newsletter