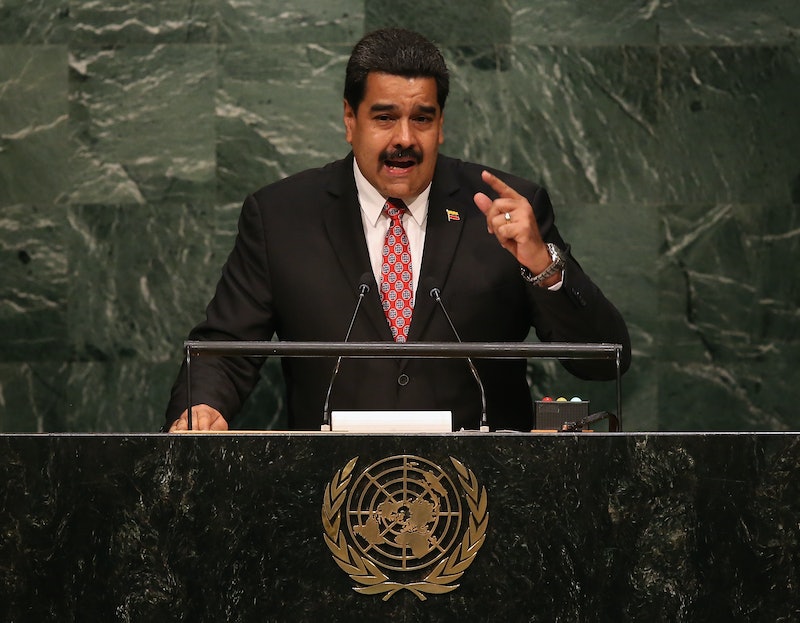 As the country's economy has continued to plummet, Venezuela's government has found itself in the middle of a legitimacy crisis. And as the battle over leadership carries on, Venezuela's president accused the U.S. of organizing a coup, pointing to the fact that some U.S. leaders have vocally backed the opposition group, according to CNN.

Speaking to CNN Turk, the network's Turkish outlet, sitting Venezuelan President Nicolas Maduro said that he believed President Donald Trump "despises" Venezuela, and that his attempts to reach out to his American counterpart have been fruitless.

"This is the reason for the coup," he continued, per CNN. "They don't want us to get better. They sabotage us and try to destroy the economic system."

Any pre-existing tensions between the United States and Maduro's government were amplified late last week when the Trump administration recognized self-proclaimed interim President Juan Guaido, leader of the National Assembly, as the country's legitimate leader.

"The people of Venezuela have courageously spoken out against Maduro and his regime and demanded freedom and the rule of law," Trump said in a statement, according to NBC News.

In response, Maduro attempted to end diplomatic relations with the United States, ordering all U.S. diplomats to leave the country within 72 hours. The U.S. State Department, however, said that Maduro had no authority to make such a command. On Saturday, Maduro retracted his demand, which was framed by many news outlets as an attempt to defuse the ongoing tensions.

The next day, however, in his Sunday CNN Turk interview, Maduro maintained that his country was "the victim of a U.S. conspiracy," according to CNN. This came as several major players in the international community demanded that he call a new presidential election, to determine the country's true leader.

On Saturday, Britain, Germany, France, and Spain, among others, asked Maduro to hold a new election within eight days, or else they would recognize Guaido as the legitimate Venezuelan leader, according to The Washington Post. On the same day, the European Union said in a statement that it, too, would recognize Guaido if Maduro didn't call an election soon, though any deadline was less clearly defined. (The Venezuelan self-proclaimed interim president reportedly took this as a show of support, describing the push as "a firm step toward our fight for democracy," according to the Post.)

Also on Saturday, the UN Security Council held an emergency meeting to discuss the ongoing crisis. There, U.S. Secretary of State Mike Pompeo firmly urged the international community to back Maduro's ouster.

“No more delays, no more games," he said, according to the Post. “Either you stand with the forces of freedom, or you’re in league with Maduro and his mayhem.”

But not everyone was on board with Pompeo's ultimatum, and for some, such pressures have bolstered accusations that a coup is actually behind the conflict in Venezuela. During Saturday's emergency meeting, Russia's UN Ambassador Vasily Nebenzya accused the United States of mischaracterizing the conflict, as well as of attempting “to engineer a coup d’etat in Venezuela," according to the Associated Press.

“If anything represents a threat to peace and security, it is the shameless and aggressive actions of the United States and their allies to oust a legitimately elected president of Venezuela,” he said.

It was not immediately clear on Sunday what would happen if Maduro maintained his claim to the presidency and refused to call for a new, fresh presidential election.