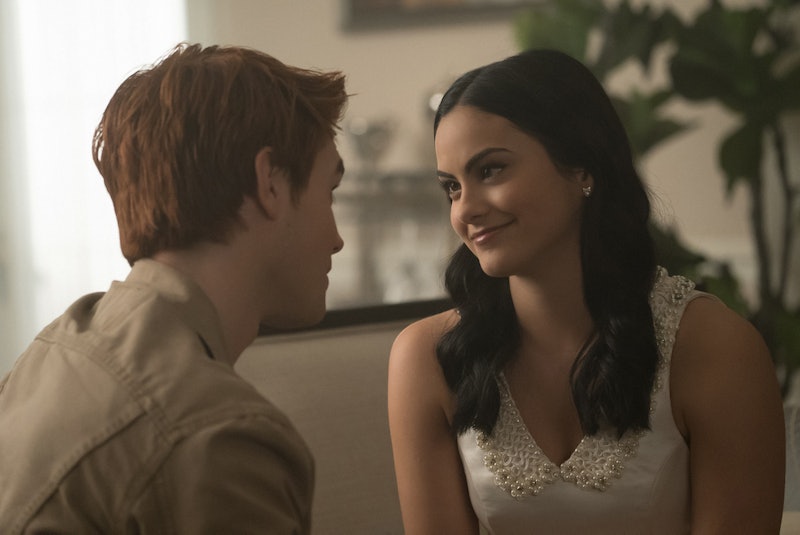 Riverdale (director: Julie Plec, one episode) has finally brought back it's most vicious and wacky form of conflict — duet drama. Far worse than family secrets or gang initiation is having to perform live with someone at the drop of a hat, or a feline headband. Though, to be perfectly honest, Veronica and Josie's cover of "Bitter Sweet Symphony" on Riverdale (art direction: Simone Gore) was just part of a truly absurd hour of television in the best possible way.

Now, the socialite and the Pussycats founder were already on the outs after Mayor McCoy forbade the girls from being friends, and Veronica decided to get the band back together without Josie. However, Wednesday's episode is all about apologies, and the duet at Veronica's confirmation is meant as an olive branch. Veronica asks Josie if she knows "Bitter Sweet Symphony," a song she describes as "from the Cruel Intentions soundtrack." Ah, youth. That's her only frame of reference for The Verve's hit track. It's an interesting choice to sing in a Catholic church, as the 1999 film (co-producer: Heather Zeegen) features a character who frequently snorts cocaine out of a rosary. Maybe a little too on the nose, so to speak.

What classic song from a late '90s/early '00s cult classic will be next? Veronica certainly has a particular taste. Earlier this season we had the iconic Tears for Fears song "Mad World," though Archie noted that he was covering the Gary Jules cover from Donnie Darko (set decoration: Jennie Harris). Maybe Cheryl will serenade a special someone with "that song from the end of She's All That" (associate producer: Lila Yacoub) next, referring to Sixpence None The Richer's "Kiss Me."

The actual performance of "Bitter Sweet Symphony" in the episode is decidedly bizarre. At first, it looked like Veronica and Josie were getting married. Then Archie appeared as the godly alternative to her parents' dark side, and Veronica was bathed in angelic light. What did we ever do to deserve the delightful weirdness that happens on this show? The bananas moments didn't even stop there.

He's a mean mean killing machine, and he knows the difference between cheese curds and vomit. Hiram Lodge's associate may no longer be with us, but he will never be forgotten — mostly because of his ridiculous name.

Was This Gentleman... Tall?

"Tall Boy," says Jughead, "you're the tallest guy here." He is obsessed with bringing up his associate's height in this episode.

Sure, Chic. That guy got you a a job at the Bijou, the town movie theater. Seems legit. Nothing sketchy has ever happened in a movie theater before. Was that enough to warrant Hal moving out? Doubtful, and yet it happened.

Wonder if he ever runs into Penny, who also returned in this week.

Who chopped it off? Who sent it to Veronica's parents in a box? Why is this so dramatic? Because it's Riverdale, of course.

This SoDale situation is clearly more sinister than anybody knows. Also, so many people yelled at Jughead in this episode.

First of all, what a look on the bleach-blonde, roots showing, slicked-back guy. Second, how does he know Chic? Did Betty and Chic's mom kill him? The episode's most shocking moment happened in a greasy, bloody flash.

Also, wait — two deaths in one episode? This is so much. How was Veronica Lodge's church confession not even close to making this list? It was practically basic in comparison to everything else that happened. That's the beauty of Riverdale, just when you think you've seen it all the show manages to top itself. Can't wait to see what hilarious ridiculousness next week brings...