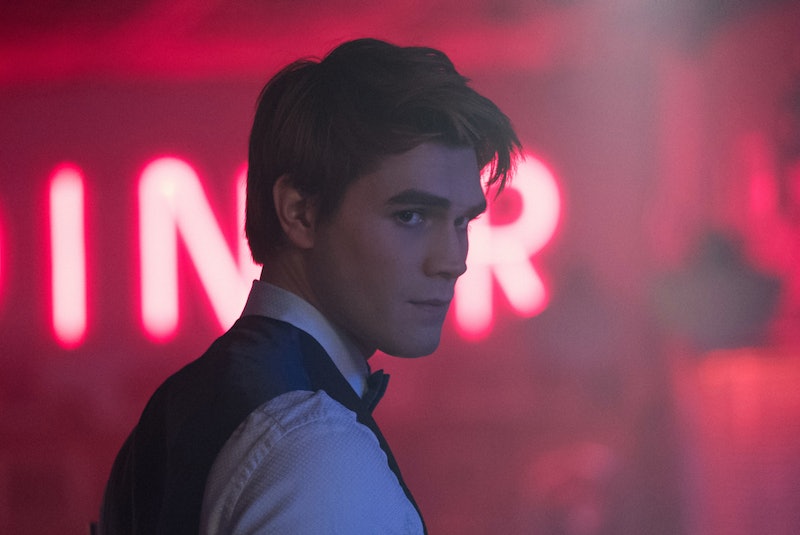 Long-lost brothers, forgotten massacres, and the upcoming school musical may have stolen focus on Riverdale (writer: Britta Lundin, four episodes), but there are a lot of mysteries still at hand. Don't forget about the FBI agent in the basement. What is FBI Agent Adams' deal on Riverdale? This new character is so suspicious and yet he's flying under everyone's radar.

A lot of silly things have happened on this show that test the limits of what it's actually like to be a teenager, but Archie Andrews' federal agent friend has got to be one of the most ridiculous. Even if you look back to your high school years and marvel at the level of responsibility that you were entrusted with, these characters manage to take it above and beyond. How is Archie all of a sudden the FBI's most valuable resource in the case against Hiram Lodge? How does Archie, after discovering a treasure trove of secrets and conspiracies in his otherwise pristine small town not only trust this guy on first sight, but drop everything to help him?

Let's review. Adams first showed up in Season 2, Episode 10, "The Blackboard Jungle." He wants information on Hiram Lodge, and claims that Archie's father is too involved to be approached. Archie doesn't tell any of his friends that he's working with the FBI. He demands and is granted protection for Veronica. Since then, Archie has become his spy on the inside.

Adams' appearance is far too convenient, promising to protect Fred even though Fred is not currently in danger — except in a potential court case, according to Adams. Something is up with the new fed in town, and these theories could explain what's happening.

He's Not Really An FBI Agent

He's Not Really There At All

As PopBuzz reported, this is a popular fan theory, likely thanks to the Fight Club (producer: Cean Chaffin) enthusiasts out there. Is Agent Arthur Adams in Archie's head? He shares initials with our red-headed hero. Plus, Jughead refers to Archie's partnership with this guy as a step into darkness. Is that because he has to get in with Hiram and threatened Nick St. Clair in order to get the information Adams needs — or is his invention of Adams a sign of his own dark side? Nobody else has been seen with Adams so far. It's not... not plausible, as far as theories go.

Even if Archie isn't hallucinating, what if Agent Adams is a ghost? If Sabrina Spellman is around the corner, and she and and her Chilling Adventures (location manager: Janet McCairns) most certainly are, then the show is going to have to delve into the supernatural eventually.

That's a likely theory, that poor sweet Archie is getting played by Hiram. Maybe the FBI agent is just there to distract Archie, or maybe he's there to push him closer to Lodge industries.

Both characters showed up around the same time on Riverdale (music: Sherri Chung, 22 episodes) and both seem suspicious. Perhaps the two are connected, as Comicbook.com explored, and the boy staying in the Cooper's house isn't their long lost son at all. In Archie comics, Chic Cooper is a government agent/spy — so keep an eye on this theory.

Whatever this guy's deal is, Archie is being far too naïve. While that's not exactly surprising, it does mean that a twist of some sort is probably coming. Archie may trust this agent on Riverdale (producer: Sarah Schechter) but that doesn't mean anybody else should.