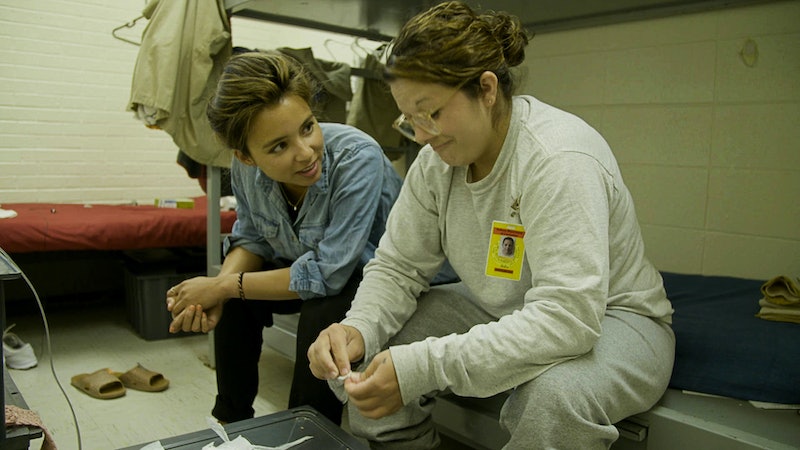 Many discussions of women's rights revolve around political and social spheres that hold back women's advancement. However, these discussions often forget to include the incarcerated women who are trapped within a criminal justice cycle that doesn't account for their needs. In VICE's newest episode premiering May 19, correspondent Isobel Yeung spends the night with a group of incarcerated women and gives a face to those most affected by the American prisons and jails. In an interview with Bustle, Yeung explains why the amount of non-violent female offenders currently incarcerated is a symptom of a broken system.

The problem lies with ignoring the real issues and preferring to use a method that isn’t working, the episode attests. By locking up women for nonviolent crimes, the theory is that this perpetuates a cycle of repeated felonies and broken families.

"There needs to be more of an awareness of what the situation is. The system is failing us, particularly when it comes to the incarceration rate at which we are locking away women," Yeung says.

Often it is the role of prisoner that stands out before the actual person. It could be argued that gendered performance plays a role in this, as women are expected to behave socially different than men. In a piece for The New York Times, Nicholas Kristof writes, "One reason mass incarceration doesn’t get fixed is that society regards felons with a mix of fear and contempt. In fact, the women should evoke sympathy; even more than male prisoners, they have been through the wringer."

As for nonviolent offenders, Yeung says, "They often find themselves caught up and get longer sentences because they refuse to rat our their partners in crime — husbands, boyfriends."

Prior to their incarceration, many of these women were caught up in dangerous, abusive relationships or had a family history of abuse. According to Yeung, "It’s overlooked that two thirds of women are there for nonviolent reasons. So many of them are mothers, they are there for drug abusers or drug charges, one thing that doesn't come across is that a majority of women in these jails have been abused in some shape or form."

"Most of the women are in criminal justice system for most of their lives," says Yeung. Add the trauma of incarceration to the mix, and the women struggle with their previous identities prior to prison, which often includes motherhood. "You are not going to convince people, a lot of people will watch this and see them as criminals that they deserve to be in there, but I think if we hit these points that women are mothers and by locking up mothers, we are punishing children," says Yeung.

Away from home and family, prison life offers its own complications. In its "Prison Survival Guide," Zoukis Prisoner Resources writes, "Female prisoners have different needs from male prisoners, and prison reform has been slow to react to these particular needs. While some changes have been made — the shackling of pregnant prisoners, for example, has been outlawed in 21 states — the system has a long way to go to address where it falls short for female inmates." For nonviolent offenders, this broken system of ignoring what women need in prison can affect their wellbeing and mental health during and after their incarceration.

Despite this complicated system, Yeung describes her experience with the women as a positive one. She says, “We weren’t sure what to expect going in there. I was pleasantly surprised — we spent the night, and the women were completely welcoming, it was a nonthreatening environment. The women helped us unpack and offered us advice. Some of these women have been through these similar issues, a real sense of support network of looking out for each other."

In prison, contact is strictly forbidden among the inmates. "The women said they feel very frustrated that they couldn’t hug each other," shares Yeung. This lack of contact also contributes to a system that perpetuates the idea that criminals don't deserve to be treated as actual people. Yeung describes the situation as "really difficult. It is an incredibly lonely place to be, which I guess is surprising because you are surrounded by people.”

Naturally, watching this episode could remind viewers of shows like Orange Is The New Black, but they can be a double-edged sword. "I think shows brings a great awareness. There wasn't this discussion around incarcerated women a few years ago. The show opens up that conversation, we can emphasize with some of them. On the other hand, more of the serious issues are overlooked," says Yeung.

Some of those serious issues will be addressed with VICE's newest episode, and Yeung hopes viewers will have a better understanding of the struggles that come with incarceration. In order to fight against this broken system, viewers are asked to see these women for who they are, not for what they may have done.

Editor's Note: This article previously incorrectly implied that Yeung spent the night in prison, rather than a jail.

More like this
The 'It's A Sin' Creator Revealed A Massive Detail That Didn't Make The Final Cut
By El Hunt
Everything To Know About ‘The Handmaid’s Tale’ Season 5
By Amanda Whiting
What’s New On Netflix: 'Stranger Things' & 'Somebody Feed Phil' Return
By Arya Roshanian
What’s New On Netflix: A Victoria Justice Rom-Com & The Return Of David Letterman
By Arya Roshanian
Get Even More From Bustle — Sign Up For The Newsletter