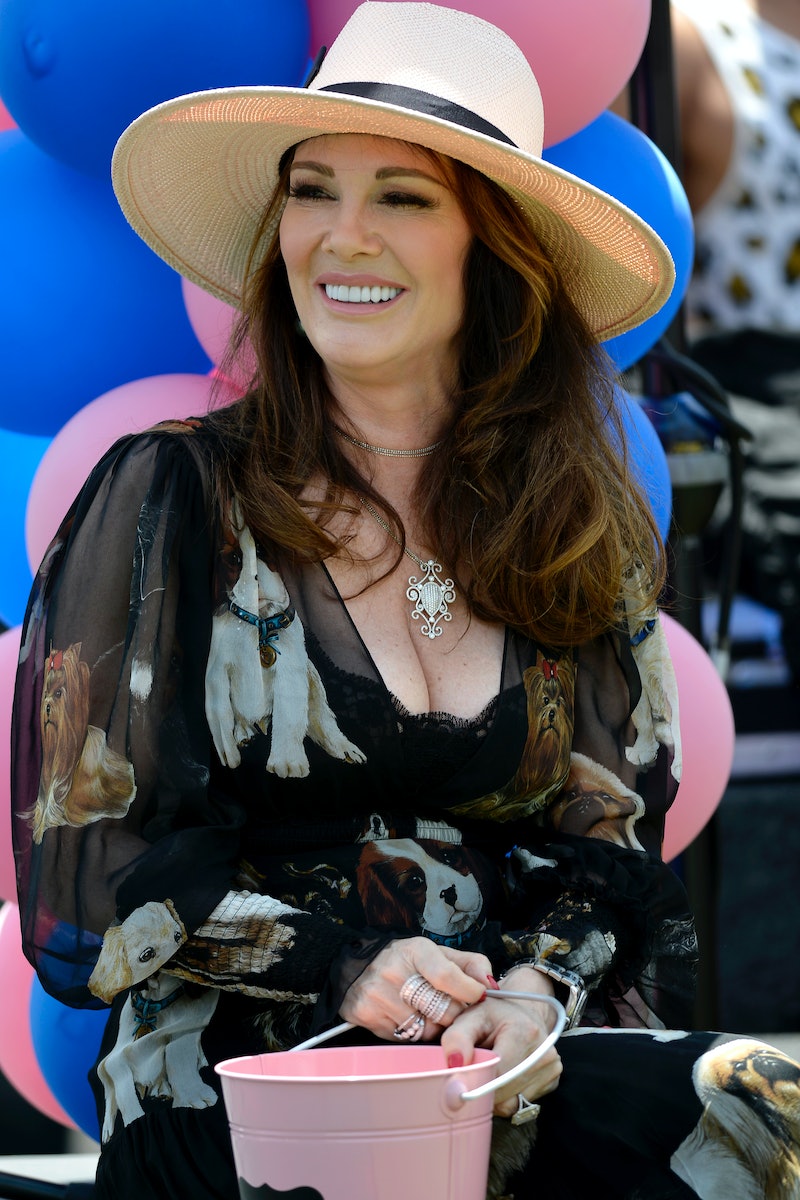 Lisa Vanderpump has officially exited the reality show she's called home for nine seasons. It was confirmed in a recent interview with Extra that Vanderpump is leaving Real Housewives of Beverly Hills, in the same week that she was absent from the Season 9 reunion. People also confirmed news of the reality star's departure on Friday, June 7.

On Tuesday, June 4, a rep for Bravo told Bustle issued the following statement regarding LVP's comments during a June 4 interview with DailyMailTV, where the former housewife seemingly confirmed rumors of her departure:

"There is so much great drama and fun still to come this season including the ladies’ trip to France, so before we focus on next season, let's see where this one takes us."

LVP opened up about leaving the show at the 7th annual "Real to Reel: Portrayals and Perceptions of LGBTs in Hollywood" event on Thursday, June 6. She was there to receive the Legacy Award, but the restauranteur made it clear she wouldn't be showing up for Housewives soirees in the near future. Regarding her exit from RHOBH, Vanderpump said to Extra:

"The last year was a very negative year for me. I feel like we're moving forward. They have had their resolution. I just had a horrible time with the show and the women. It was a very sad time in my life and it wasn't made any better. I just decided to walk away."

The OG Beverly Hills housewife also expressed gratitude for her award at Thursday's event, in the wake of her drama with the show. "It's a poignant moment for me, having been through the demise of 'Housewives,' Vanderpump explained. "Just to be here tonight is a feel-good factor." Variety also reported when Councilman Mitch O'Farrell introduced Vanderpump as a real housewife, before she accepted her award, her response was swift and stinging. "Not any more," she reportedly replied.

During the June 4 interview with DailyMailTV, Vanderpump was asked if she would be attending the Season 9 reunion taping and the SUR owner coyly replied, "The objective of the reunion is to reunite, right?" Then, she revealed, "And I have no inclination to reunite with the women who've been harassing me for 10 months now. So in all probability, no."

When asked by DailyMailTV whether or not she'd be returning for Season 10 for RHOBH, LVP said, "I think they've made it pretty impossible for me to go back frankly. So ... no."

Even Andy Cohen, who moderates each Real Housewives reunion, weighed in on the situation on Thursday, June 6, a day after the reunion was filmed sans Vanderpump. "Amazing & Surprising #RHOBH Reunion yesterday under unusual circumstances. We mentioned it ALL!," Cohen tweeted, presumably referring to LVP's infamous absence.

It seems there was plenty Vanderpump could have addressed on the reunion stage after a controversial season. The Vanderpump Dogs co-owner was at the center of "Puppygate," which ensued after fellow housewife Dorit Kemsley adopted a dog from Vanderpump's rescue center. After the animal allegedly bit one of Kemsley's children, it was re-homed, but ended up in a shelter after being given to what she believed to be a safe home. Soon, a story about the incident was published and all of the ladies accused Vanderpump of leaking the story.

LVP and her husband Ken spent the rest of the season denying accusations by any means possible including taking a lie detector test on camera and swearing on her children's lives that she was innocent. Soon, the businesswoman opted out of filming with her co-stars and told Page Six that she had been "bullied" out of filming scenes with the other women. On Twitter May 29, LVP clarified that while she had filmed solo, producers had cut out her remaining Season 9 scenes.

Vanderpump, who had been with Real Housewives of Beverly Hills from the beginning, isn't viewing her future with that franchise through Vanderpump Rosé-tinted glasses. But that doesn't mean she's stripped of all Bravolebrity titles. When asked by Extra on Thursday if Vanderpump Rules would be returning, LVP clarified, "The show was born on Bravo... That's going to stay on Bravo." (However, coming to work probably just got a bit more complicated.)

While avid Housewives fans come to terms with LVP's exit, the world can only speculate about how bombastic the Season 9 reunion will be when it airs later this summer.