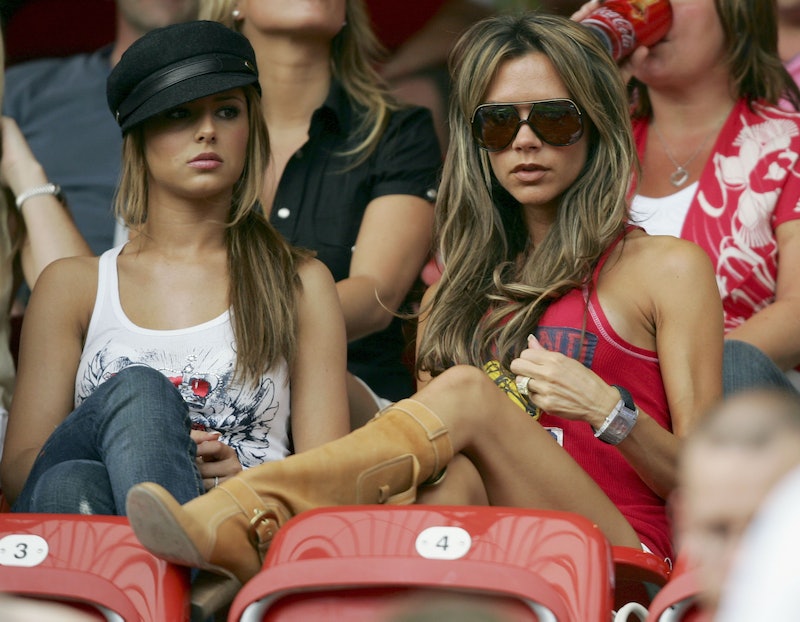 One of the best loved segments of Michael McIntyre's Big Show is the celebrity "Send to All" prank. This part of the show sees McIntyre take his famous guest's phone and send excruciatingly awkward text messages to each of their contacts. At the end of the show, the host checks his guests phone to see the often hilarious replies — and during an appearance on the show by The Greatest Dancer judge, Cheryl pranked her friend Victoria Beckham.

Beckham and the former X Factor star go way back, and famously became pals back in 2006 during the World Cup, where the pair were supporting David Beckham and Cheryl's then husband Ashley Cole. In scenes that will air on Saturday, Cheryl was left red-faced after Posh Spice fell right into McIntyre's trap. As reported by the Daily Mail, the 35 year-old was forced to watch the Big Show host send out a request to each of her contacts. The text read: "Hi babe. I’m getting private art lessons and my homework this week is life drawing. Would you come round and pose naked for me?" Cheryl appeared mortified when her A-List mate seemed to take the message seriously, when she simply replied with a text that read "Pardon?"

Although Beckham was left baffled by the Girls Aloud singer's message, some of Cheryl's other famous friends quickly clocked on to McIntyre's signature prank. Good Morning Britain host, Piers Morgan, replied by stating "I thought you'd never ask," whilst Spice Girl, Geri Horner, responded with "I don't mind you drawing my bottom." Oddly enough, it was the "Love Made Me Do It" singer's dad who was the first to reply. In response to McIntyre's follow-up text, which read "If you’d rather we can position fruit and stuff in front of your naughty bits," he said "It’s cold up here. I’ll only need a grape."

Her appearance on the BBC One comedy series follows the pop star's request that "haters" should focus on her upcoming dance competition show The Greatest Dancer rather than her personal life. Speaking at the programme's launch event, Cheryl said: "It makes me sad that we really put a lot of focus on to criticism. Just enjoy. It’s entertainment, we're not trying to revolutionise the world," and added "People are just trying to entertain you with their talent, with their skill, with their passion. I’m just looking forward to watching people shine."

Cheryl will appear as a judge on the brand new BBC competition series alongside Strictly Come Dancing's Oti Mabuse, Glee actor and Broadway star Matthew Morrison, as well as the show's hosts Britain's Got Talent's Alesha Dixon, and Diversity star Jordan Banjo. In an interview with the Mirror, Cheryl recently revealed her excitement at being involved in the upcoming series. She said: "I’ve always wanted to be part of a dance show. I feel like a platform such as The Greatest Dancer is needed for dancers in the UK was needed. I’ve danced since I was three years old and I’m classically trained in ballet. I wanted to be a ballerina until I was about 12, and I’ve always had a passion for dance in every style, shape and form."