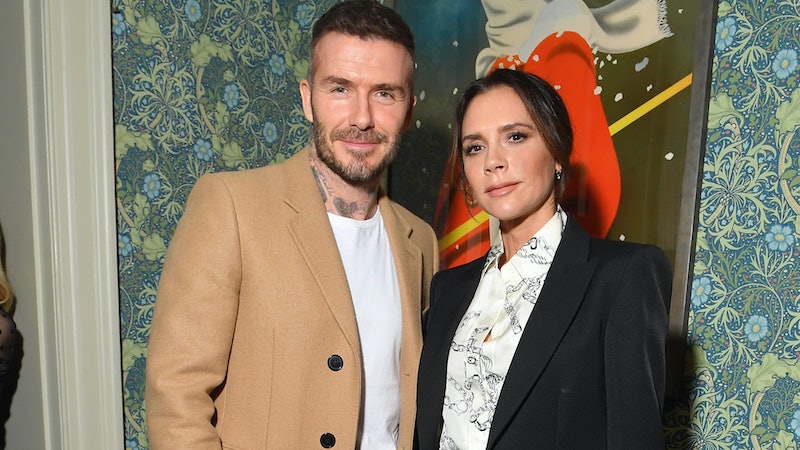 While Victoria Beckham may not be joining the Spice Girls on their upcoming reunion tour this year, that's not to say she can't still add a little spice to her life in the meantime. Celebrating the launch of her YouTube channel and her AW19 collection on yesterday evening (Feb. 17), Victoria Beckham partied with drag tribute act The Spice Gurrls and yes, it was as iconic as it sounds.

In a video posted to Instagram, Beckham can be seen joining in with the Gurrls during a rendition of "Wannabe", and is totally living her best life. The party took place at Mark's Club in London, where the designer was joined by the likes of Alexa Chung, Luke Evans, Olivia Palermo, Laura Bailey, and Chris Rock. David and Brooklyn Beckham were also in attendance after supporting Victoria during the debut of her latest collection at the Tate Britain earlier in the day.

Sunday's show marked Beckham's second foray at London Fashion Week. And if you're bummed out that you couldn't witness this icon doing what she does best, then you'll be pleased to know that Beckham live-streamed the entire event through her recently revamped YouTube channel. While the designer has been an active member of community for nearly nine years, her channel has mainly been a source for explorations of her fashion collections with the odd tutorial here and there.

"I am thrilled to launch my YouTube channel at such an important time of the year for me and offer an exclusive insight into my experience of London Fashion Week," the fashion designer told Vogue.

"I can't wait to share my latest collection with as many as possible through the livestream, and look forward to building my channel with fun and exciting content that will keep me connected with my followers as well as build a sense of community with an amazing group of collaborators."

Beckham first announced the news last November during the 10th anniversary of her brand, where she told LFW's Derek Blasberg what to expect when it comes to what will be featured on her channel. From insights into her fashion lines to styling and makeup tutorials, the designer has a lot to offer.

"I can put my foot on the gas and do everything that I've wanted to do for a long, long time," she exclaimed. "I'm really, really excited to be able to reach out to my customer [and] get to know him and her better." YouTube is certainly the platform to do it, that's for sure.

"It's been fascinating to watch her evolution from pop star to fashion designer," Blasberg told Vogue. "Victoria's channel will give people all over the world a chance to enjoy updates and behind-the-scenes access to the whole world of VB, and I believe it will truly spice up their lives!"

I don't know about you, but I'm totally down for 2019 to turn into the year of Victoria Beckham. So much so that I'm still gonna hold out hope that she'll be part of the Spice Girls reunion — a girl can dream.