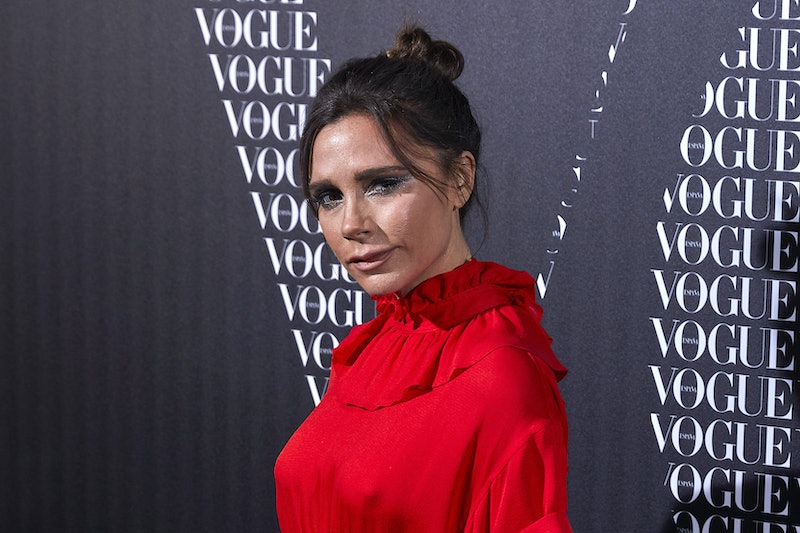 I don't want to alarm you guys, but it's just over a month until the Spice Girls reunite and take over the UK once again. Even if you didn't manage to grab tickets, it's hard not to get excited at the prospect of Ginger, Scary, Baby, and Sporty Spice being back at it. Although, it's hard not to feel a little bummed out that it won't be a complete reunion without Posh Spice. Although, there might just be a silver lining as rumours are circulating that Victoria Beckham is reportedly making an appearance at Wembley on June 14, according to the Daily Star.

"Victoria doesn't want to commit to the entire tour, but she is still very proud to be a Spice Girl," a source told the newspaper. "So she wanted to be a part of the tour, even if it is only for the one night." I reached out to Beckham's reps for clarification who told Bustle that there is no truth to this claim.

When the extra dates were added last November, Mel B seemingly confirmed that Beckham would be joining them on that date during an interview with Heart Radio, as The Sun reported at the time. However, reps for the designer later told the newspaper that this was not the case. "Victoria made a statement three days ago clearly confirming she would not be joining the girls on tour. That fact remains the same, she is not taking part in the tour. Not on any date."

Even though it's a bummer that this tour will be missing Posh Spice, Beckham has been pretty open in regards to why she won't be part of the reunion. While the designer was promoting her fashion line earlier this year, it was inevitable that she would be asked about the upcoming tour. During an interview with The Guardian, she explained how it wasn't a difficult decision to turn the offer down. "What I do now is my passion and a full-time job," she said.

"I'm excited to see it, though. And I'm sure when I'm there and they are on stage, there will be a part of me that feels a bit left out. Because even after all this, a part of me will always be a Spice Girl."

What Beckham means by "when I'm there" is that she's planning on taking her kids to see one of the shows, as she revealed to presenters Michael Strahan and Lara Spencer on Good Morning America. "[I]t's going to be the best show — I can't wait to take my kids and see it, but with my business now I just wouldn't be able to [take part]. But I wish them so much luck and love, [...] and in spirit I will absolutely be there with them."

When asked by Strahan whether she'd be tempted to get up on stage when watching her BFFs from the crowd, Beckham replied "Well, I mean I don't know. Let's see." OMG, well, we'll just have to wait and see whether Beckham reunites with the girls after all.