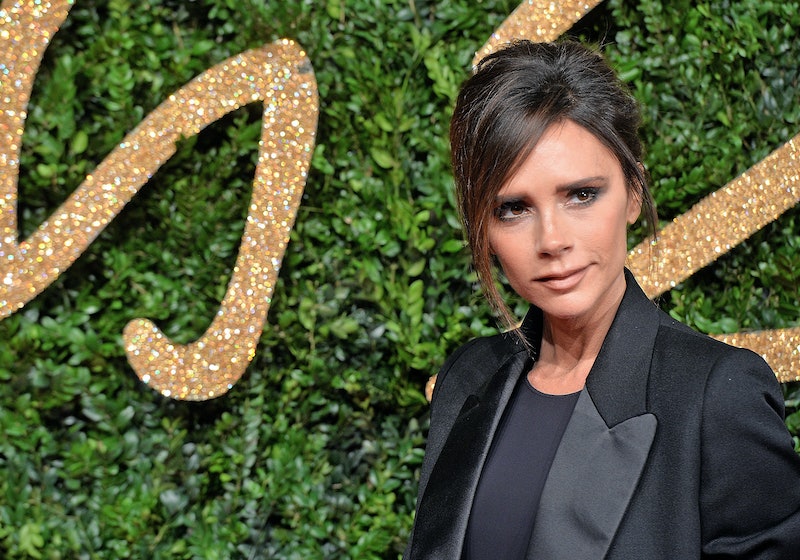 After the Spice Girls officially announced their 2019 reunion tour in November 2018, fans' immediate excitement was promptly quelled by the news that Victoria Beckham, AKA Posh Spice, won't be joining her fellow "Wannabe" singers in the U.K. this summer. Beckham's skipping out of the Spice Girls' reunion tour may not have come as a huge surprise — rumors of a Spice Girls tour sans Beckham started circulating in August 2018 — but it was still a tough pill to swallow for fans of the girl group which had once sang "friendship never ends." But in a recent interview with The Guardian, Victoria Beckham said that she's still a Spice Girl even if she's not participating in the exciting reunion tour.

In the profile of Beckham, published on Jan. 19, the singer-turned-fashion-designer gave Spice Girls fans a lot to feel comforted by while meditating on missing the upcoming U.K. shows. "I'm sure when I'm there and they are on stage, there will be a part of me that feels a bit left out. Because even after all this, a part of me will always be a Spice Girl," Beckham said. See? Friendship does never end, as it sounds like Posh Spice will be cheering from the stands while watching the four women performing on stage.

The fact that it sounds like Beckham will go watch the Spice Girls on tour along with the thousands of other lucky fans who can make it out to the U.K. shouldn't come as a surprise considering that Posh was supportive of the band's reunion tour from the day that it was officially announced. On Nov. 5, Beckham posted a photo of the four Spice Girls who will perform this summer, Mel B (Scary Spice), Mel C (Sporty Spice), Geri Halliwell (Ginger Spice) and Emma Bunton (Baby Spice). The designer's Instagram caption read, "I won't be joining my girls on stage again but being in the Spice Girls was a hugely important part of my life and I wish them so much love and fun as they go back on tour." At least fans got to see all five of the ladies take the stage back in 2012 at the Closing Ceremony of the London Olympics.

Even if the former Posh Spice told The Guardian that she might feel left out during the Spice Girls' 11-show tour, Beckham said that her decision to skip it came easily. "What I do now is my passion and a full-time job. I'm excited to see it, though," she said. And when asked if she might possibly make a cameo or, even jokingly, a hologram of her could, the mother of four responded, "No. Definitely not."

It may be a good time to finally let go of any hope that Posh Spice could join her fellow '90s pop superstars on stage in the upcoming concerts. But that doesn't mean that the 2019 Spice Girls tour won't still spice up your life, and be one of the events of the year. Instead, it just means that Beckham will be cheering on her squad from afar, just like the rest of the fans.