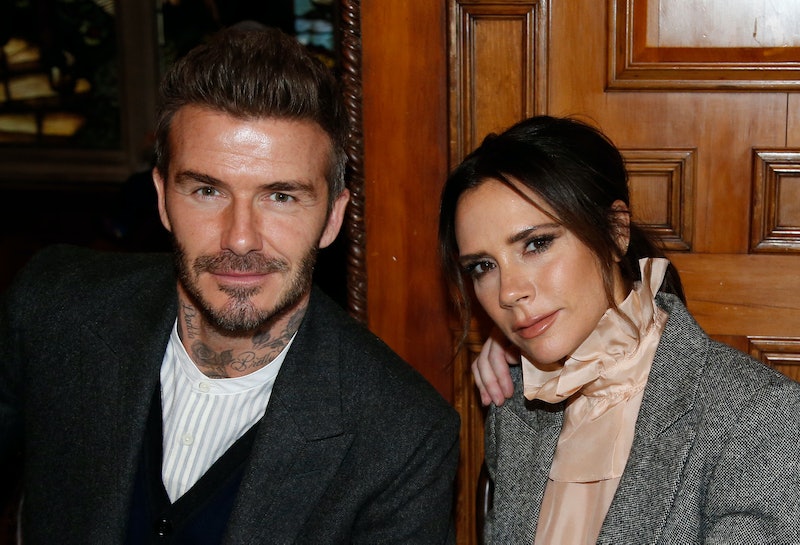 With a festival as big and popular as Glasto, it's not surprising that a handful of celebs made their way to the Somerset fields this weekend. Thanks to the enormous crowds and celeb spotting being an afterthought for your typical festival goer, the likes of Dua Lipa, Louis Tomlinson, and Jack Whitehall were able to enjoy the sights and sounds pretty much unnoticed — even when sharing their location on social media. There was one celeb couple that got everyone talking (and swooning) however, as Victoria and David Beckham went to Glastonbury together, and they were adorable AF.

As shown on both their Insta stories, the couple enjoyed The Killers headline performance from the crowd and later from the sidelines of the stage. Both posted videos of their set, and according to Hello! magazine Victoria posted a snap of her and David in an embrace beforehand with the caption "So much fun!! Kisses, X". After watching The Killers, it seems that Beckhams then moved on to the Park Bar to enjoy Nick Grimshaw's DJ set as The Sun reports, which "ran from midnight to 2am" according to a source. Despite neither of the two posting this on their Insta stories, it seems The Sun were able to obtain some pics of the couple as they danced the night away together.

And according to NME, David was also spotted enjoying The Charlatans with Take That's Mark Owen on Saturday, after a fan reportedly saw the two at the side of the stage.

David and Victoria weren't the only Beckhams at the festival, as their 20-year-old son Brooklyn and his girlfriend Hana Cross were also seen enjoying what Glasto had to offer, including Miley Cyrus and Loyle Carner thanks to Cross's Insta story. She also posted an adorable little video of the two of them dancing at the Park Stage on Sunday night. Brooklyn was also pictured with Jack Whitehall and Professor Green — I mean, talk about a more iconic trio.

As previously mentioned, there were plenty of other familiar faces populating the Glasto crowds over the weekend. As SomersetLive reports, Joe Cole, Kyle Soller, Vanessa Kirby, Emma Corrin, Pixie Geldof, Tilda Swinton, and Riz Ahmed were also spotted making the rounds. And as Harper's Bazaar reports, Alexa Chung and Sienna Miller absolutely slayed with their festival lewks, as well as opting for some more English-vibes including wellies, coats, and cardigans. Even though it ended up being pretty toasty this weekend, you can never be too prepared with the British weather, amirite?

And don't forget the artists performing at Glasto, who made the most of their time off stage catching up with their mates and simply enjoying the festival like everyone else. For example, despite having an afternoon slot on the Friday afternoon, the legend that is Sheryl Crow made sure that she'd "stick around" after finishing her set. "If I'm gonna be there, I really wanna see it, y'know? We haven't played there in 22 years, since 1997, so I wanna make the most of it."

More like this
Lewis Capaldi Is “Really Sorry” After Pre-Sale Ticket Fiasco Guts Fans
By El Hunt
Twitter Is Saying The Same Thing About Beyoncé's Renaissance World Tour
By Shahed Ezaydi
“I’m Not Here To Make Friends” Speaks To A New Sam Smith Era
By Maxine Harrison
How To Buy Tickets For Beyoncé’s UK Renaissance Tour Dates
By Shahed Ezaydi
Get The Very Best Of Bustle/UK
Sign up for Bustle UK's twice-weekly newsletter, featuring the latest must-watch TV, moving personal stories, and expert advice on the hottest viral buys.