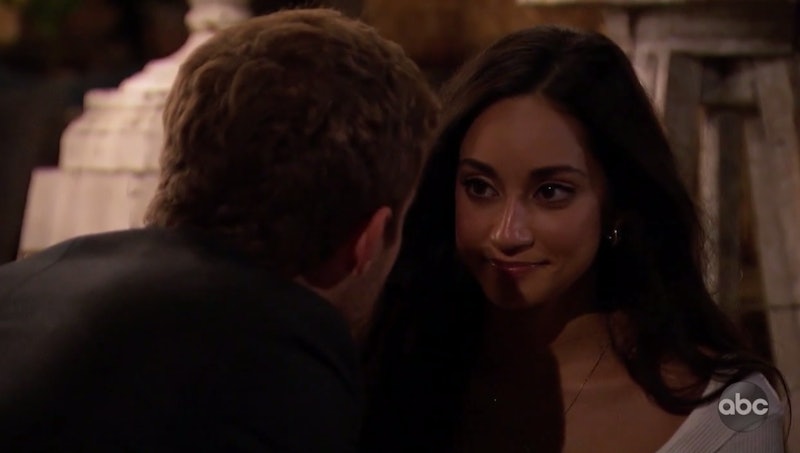 Remember when Hannah B.'s Bachelorette contestants competed for the title of Mr. Right? Peter held his group date equivalent on night two, and it nearly caused Victoria F. to leave The Bachelor all together. She didn't like the idea of competing against and outshining the other girls, but in the end, she made the top two. Still, in a later conversation, she admitted that the whole competition may be too much for her to handle.

Before heading out on the runway, the girls were tasked with choosing a few outfits to model for Peter. While surrounded by the other girls — and Peter himself — Victoria buckled under pressure. She broke down in a confessional, saying that she's not "confident enough" to stand out among the rest, but a producer encouraged her to push through and embrace what's outside of her comfort zone.

Tearful, she persisted, and some type of confidence must've overcome her, because her first stride down the runway oozed poise. She even winked! When she came off the stage, she stumbled forward. "I blacked out!" she exclaimed. After making the top two, she had to execute a final walk opposite of Hannah Ann, who ultimately won the grand prize.

Regardless, Victoria still won one thing she never thought possible: Peter's attention. The two got to share a private conversation after the show, where, at first, Victoria was coy and hesitant to talk. Peter immediately could tell something was wrong, and asked her about it. That's when she broke down. "I don't think I'm made out for this," she told him. "I like you, but I just don't know if it's like worth my mental heath."

Thankfully, Peter understood. He's been there before, so he turned on the charm. "When I'm with you, you have all of me," he said. "And I want you to feel the same way." He then pulled her away from the the camera's foreground, and tried to talk a bit more. He assured her that her uniqueness — the fact that she's not like the other girls, is endearing to him.

"It's very endearing to me that this is not easy for you," he said. "But you're trying your best, and I see that." His compliments successfully settled her threatened emotions, and to secure the deal, Peter gave her the group date rose.

If you've followed Bachelor news since filming began, you know that there's a good chance Victoria makes it far with Peter. And now, it looks like she may have left much sooner if Peter didn't convince her to stay.