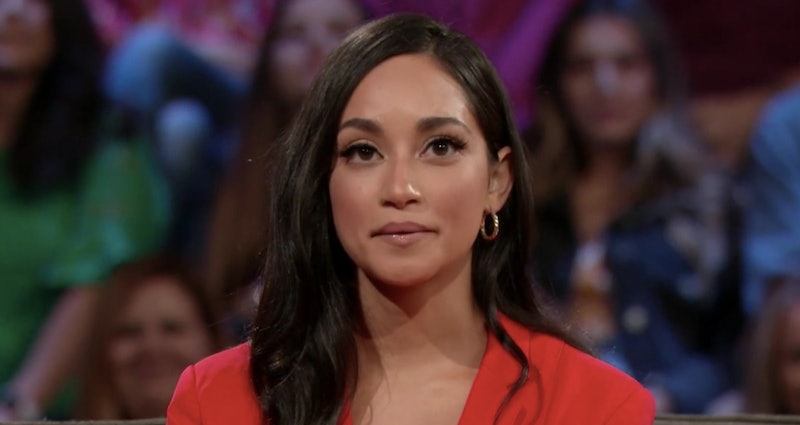 Rumors have swirled around Victoria Fuller since before The Bachelor began, making her Women Tell All hot seat almost as anticipated as Peter's "spoiler-free" finale. At last, Chris Harrison asked her about the cheating allegations made by her former acquaintance and Peter's ex-girlfriend Merissa Pence during her hometown date, and she straight-up denied them all.

“That was extremely frustrating to me," Victoria said of the allegations. "I think this was just somebody who didn’t like me and she wanted to … I don’t really know why she did it. I just think, maybe she wanted to come on the show.”

To clarify, Harrison asked her, point-blank, if she had ever broken up a marriage. Her response was, "Absolutely not" adding that it was "just hard to have the guy that I'm dating, who could potentially be my husband, think that about me."

In Pence's blurred-out cameo during hometowns, she told Peter to "be careful," warning him about Victoria's allegedly dishonest behavior in past relationships. "I just know what a good guy you are, and I would hate for any of who you are to be affected by somebody else," she said. "I don't think you deserve what you're on a date with right now."

When Peter confronted Victoria with Pence's comments, it didn't go well. She got defensive and they erupted into one of their many emotional arguments. On Women Tell All, Victoria said she regrets the way she reacted. "I definitely could've handled it better," she said. "Obviously, could've handled the whole f*cking season better."

She said she was nervous about seeing Peter for the first time since their breakup. "I've been thinking about it since I left," she said. "I'm a little scared to see him. I'm a little nervous."

But their relationship is behind them now. “I can’t change the past," she said. "I can only move forward." Judging from the way she stayed silent throughout the rest of the episode, it seems she's sticking to it.