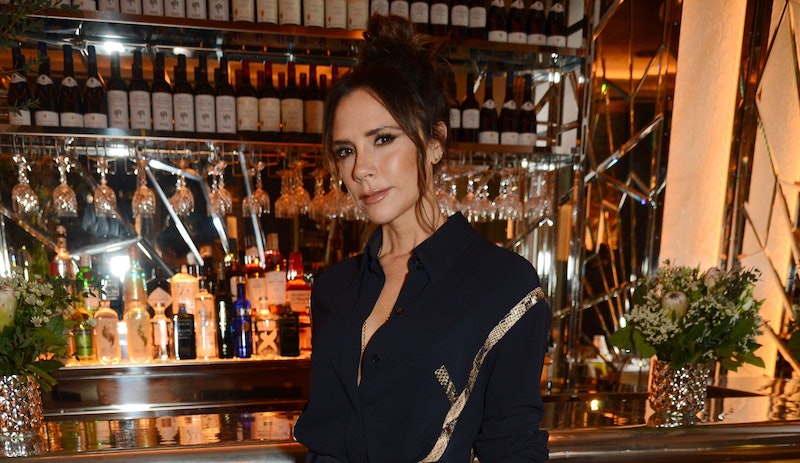 For some, August is all about forgetting about the daily grind and going somewhere with a less unpredictable climate than the UK. If there's one family that's got that nailed this summer, it's the Beckham's as they're currently vacaying in Italy. They deffo seem to be enjoying some quality family time together, which is so adorably on display via Victoria Beckham and Harper's holiday selfie. I'm warning you now, cuteness overload incoming.

Last Wednesday, Victoria posted a cute pic of her and David enjoying a bike ride on holiday in Puglia, Italy. Since then, the family have been documenting a fair bit of their hols through their Insta accounts and stories, with the adorable snap between Victoria and Harper being the latest update. "Special family time on holiday x Night time cuddles with Harper xx Kisses," Victoria wrote in the caption.

David also shared a loving moment with their daughter on his Instagram, which marks the beginning of an album that also features David taking a selfie with Cruz, and then three shots of Romeo, Brooklyn, and Victoria. Over on Romeo's Insta, he posted a selfie with his dad, captioning the pic with a black heart emoji. David also posted a selfie with his mum, so it seems that quite a lot of the Beckham clan are in attendance during this summer holiday.

While you won't be able to see these posts now, David and Victoria also shared some images on their Insta stories. As The Sun reports, David shared an iconic image of the couple in matching outfits before a dinner date, with the footballer making it clear that he "had it on first". Regardless, I need more pics of them twinning because I can only imagine the creativity Victoria would be able to capture between them.

The Sun also featured some snaps that Victoria shared via her stories, which included a pic of her and Cruz chilling on a sunbed and then a similar photo with Romeo.

This well-deserved break comes a few weeks after Victoria announced her upcoming beauty line, Victoria Beckham Beauty. While there isn't a specific release date for the line, Vogue points out that it will be launching this fall as the designer mentioned in the caption of an Insta post. "I was going to direct the consumer with regards to fashion before I had a standalone store, so this isn't new to me," Victoria told Vogue.

"Just like I spend so much time in the fitting room getting to know what my customers want to wear, I'm going to be asking women to tell me which products they want me to develop for them in the beauty and wellness arenas. It's important for me to know what they want."

Since the announcement, the designer has given fans a little glimpse at what the line may include. While she has yet to reveal any product names or designs, Victoria did post a photo in a personalised lab coat holding a jar of ingredients, followed by a pic of a meeting. "From labs to meetings... Busy working on #VictoriaBeckhamBeauty," she caption reads.

Fall needs to come quick because I cannot wait to see what this line entails.