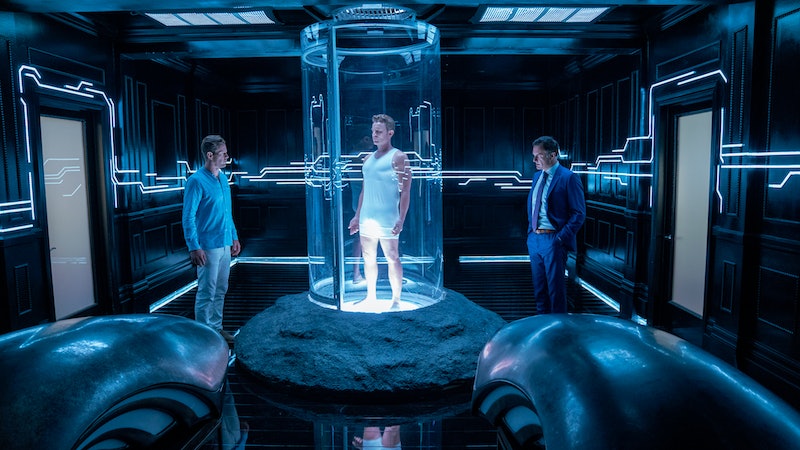 The final episode of the first season of Runaways may have focused mostly on the Runaways actually running away — from their parents, specifically — however, the fate of one of those parental figures still remains somewhat unclear. Victor Stein, played by Buffy the Vampire Slayer's James Marsters, is in need of some serious regeneration and soon. But in order for that to happen, someone else needs to be sacrificed, and considering no one has offered themselves up yet, unclear whether Victor will be in Runaways Season 2 very much. And if he is, whether he'll be alive or destined to spend the rest of his days decomposing inside that glowing box Jonah placed him in for safe keeping? There are already some clues out there that tease at his ultimate fate.

After Jonah put Victor's body on ice (metaphorically speaking and also kinda literally as well), Entertainment Weekly spoke with executive producer Stephanie Savage and fellow EP Josh Schwartz about that ominous episode and what it means for Marsters' Runaways character moving forward. “You will definitely see him again,” Savage promised the outlet, though Schwartz was quick to chime in with a word of caution for viewers that Victor may not be the same person coming out of that box as he was going into it: “No one goes through Jonah’s personal medical care completely unchanged."

Ironically, the person Victor has to thank for his inevitable return is the one person who is quite possibly the most dangerous character on the show. Jonah needs Victor around, which is why it always seemed pretty evident that he'd find a way to bring the genius doctor back to the land of the living. “Victor is the person that has all of [Jonah’s technological plans] in his head,” Savage explained to EW. “It’s the endpoint of his whole journey, and it’s taken many, many years to develop this technology in order to get him what he wants. He’s the piece of the puzzle that’s needed for this portion of the mission.”

But just in case you needed any more convincing that Victor will pop up at some point throughout the course of the second season, Marsters himself has confirmed as much during an interview with SyfyWire, even going so far as to predict just how different his character could be upon emerging from that box. "He might come back looking like a zombie, or he might come back looking like a Greek god," Marsters stated during the interview, adding:

"If it's a zombie, make it as horrific as possible. Don't make me pretty. On Buffy, I was always like, 'Put a big wound on. Just slather me with blood. I don't mind.' But I want Jonah to fix Victor up! I want his mitochondria to be sparkling! I want everyone to go, 'Oh my god, you lost weight! Were you working out in there? You've got a six-pack!'"

And to top it all off, Marsters is even credited in numerous Season 2 episodes on IMDB, so no worries — Victor will appear. It's just a question of what exactly he'll be like once he does.