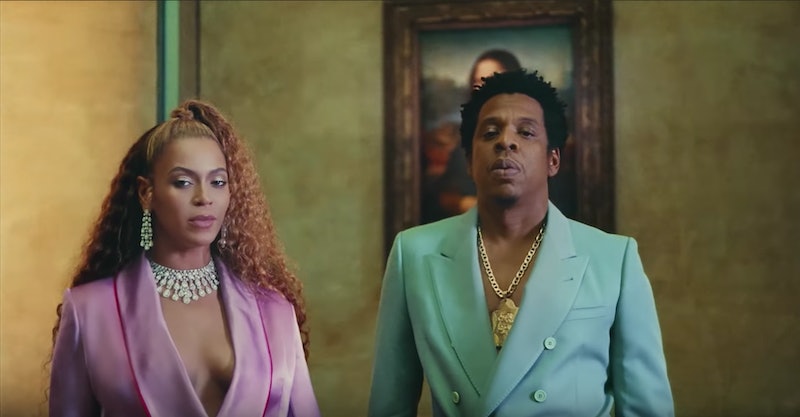 From here on out, Saturday June 16, 2018, will forever be remembered as the day that Beyoncé and JAY-Z dropped their surprise album Everything Is Love, sending the entire world into a frenzy. Fans attending the super couple's London "On The Run II" concert got a shock on Saturday night when the concert ended with a surprise announcement for the highly anticipated new album.

Beyoncé and JAY-Z teased their Everything Is Love album with a stunning announcement video at the end of their concert on Saturday night, giving the audience an exclusive look at their new music video for "Apesh*t." Some audience members were quick to get out their phones and record the glorious announcement for those who couldn't be there to experience the premiere in person. Based on the videos, it looks like audience members were completely hypnotized by the stunning visuals and the sound of new music from Bey and JAY. But once the video wraps up, the crowd can be heard exploding into cheers, only growing louder when the screen flashed the message: "ALBUM OUT NOW." Of course, the enthusiasm was more than warranted. Everything Is Love marks the very first joint album for the couple. They may have collaborated on songs in the past, but to give fans a complete joint album is truly a first.

Tina Lawson, Beyoncé's mother, also shared a video of the announcement on Instagram. In her video, Beyoncé can be seen saying goodnight to the London audience, thanking them for all their love. "Because we love y'all so much, we have something special for y'all," she told the screaming crowd. "We want you guys to be the first to experience this new project. And we have a new visual for you guys. We want y'all to count down."

Lawson also shared footage of the crowd reaction following the Everything Is Love teaser, that shows off the fans' deafening cheers of excitement. "Album out now on Tidal [heart emoji] has been killing me! At last it is out," Lawson wrote in the caption, adding, "it is so friggin good." Lawson appears to be referring to keeping the album a secret from fans. Though it's been speculated that Beyoncé and JAY-Z would release a joint album soon, neither artist had confirmed the rumors before releasing Everything Is Love.

Everything Is Love features nine tracks from the artists behind the hit albums Lemonade and 4:44. For now, it's only available to stream on TIDAL. However, fans who aren't subscribed to the music streaming site can still get a taste of the new music. The duo, who appear to have released the album under the name "The Carters," released the video for "Apesh*t," teased in their announcement video, on YouTube. The video, posted from Beyoncé's YouTube account on Saturday night, is available to everyone — TIDAL or no TIDAL.

The "Apesh*t" video is just a taste of what Beyoncé and JAY-Z have in store for fans, and it makes clear that The Carters are not playing around. The two filmed the video at the Louvre, the famous museum in Paris. It is not an exaggeration to say that most artists don't have the star power to shut down a French museum, but once again Beyoncé has made the impossible possible.

Everything Is Love is Beyoncé's first album since 2016's groundbreaking Lemonade and JAY-Z's first follow up since last year's 4:44. Both albums featured songs about infidelity, and JAY-Z has spoken about cheating on Beyoncé during their marriage. Now, with Everything Is Love, it seems that the couple is ready to share another side of their relationship with fans. One that proves that their love isn't just strong and fabulous, it's literally Louvre-worthy.

More like this
Beyoncé’s Special Tribute To Sister Solange Was Both Touching & Hilarious
By Stephanie Topacio Long
Everything To Know About Taylor Swift’s 10th Studio Album, 'Midnights'
By Grace Wehniainen and Jake Viswanath
How Ghosts Inspired Kesha’s New Music
By Jake Viswanath
At 28, Melanie C Was Falling In Love & Reclaiming Her Confidence
By Olivia-Anne Cleary
Get Even More From Bustle — Sign Up For The Newsletter