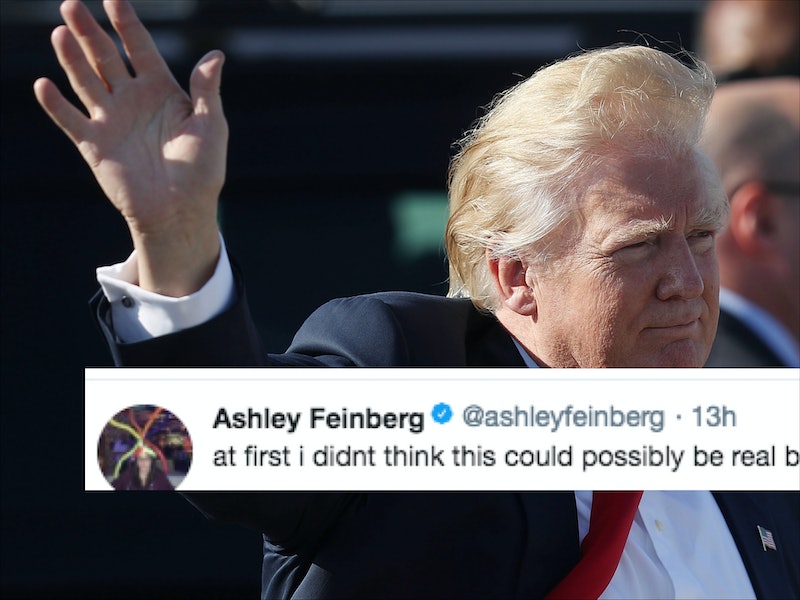 While boarding Air Force One last week, Trump was struck by a gust of wind — which finally exposed the president's hair for what it is, or isn't. The video of Trump's hair in the wind was brought to public attention by reporter Ashley Feinberg, who wrote: "at first i didnt think this could possibly be real but.... i think it is?"

As with much of Trump's public image, the president is notoriously vain about his hair. One of his former photographers told Newsweek:

He did say to me, "Everybody always talks about my hair. It's not that strange, is it?" He knows everyone knows his hair is strange. There's a certain amount of vanity there.

(This was back in 2004, when Trump and everybody else probably had more hair.)

His well-established vanity is at odds with his remarks about women — whom he has consistently objectified throughout his career, apparently regarding them as little more than their looks. This quote from Michael Sebastian in Cosmopolitan probably says it best:

[Megyn] Kelly had asked Trump about his stance on women, saying, "You've called women you don't like fat pigs, dogs, slobs, and disgusting animals." Trump tried to cut her off, insisting he's only said those things about Rosie O'Donnell.

It's clear by his tweets that President Trump has paid close attention to how the "fake news media" portrays him, both in terms of his policies and aesthetically. According to POLITICO, prior to taking office, Trump even complained to an NBC executive about the photos they used of him.

Trump turned to NBC News President Deborah Turness at one point, the source said, and told her the network won't run a nice picture of him, instead choosing "this picture of me," as he made a face with a double chin. Turness replied that they had a "very nice" picture of him on their website at the moment.

The president is also famously driven to anger by comments on his "small hands" and other aspects of his appearance — I mean, who can forget "Why would Kim Jong-un insult me by calling me 'old,' when I would NEVER call him 'short and fat?'"

The president has consistently defended his hair over the years, telling Rolling Stone in 2011:

I actually don't have a bad hairline. When you think about it, it's not bad. I mean, I get a lot of credit for comb-overs. But it's not really a comb-over. It's sort of a little bit forward and back.

According to the president's official medical report, he regularly takes finasteride, which is a drug to combat male-pattern baldness.

Does it matter whether Trump has the head of hair he pretends he does? No, not really. Has he lowered the office of the presidency to the point where journalists and citizens alike revel in exposing the flaws he denies having? Yes, unfortunately.

Trump has picked some of his most senior advisers based on his opinion of their appearance and has repeatedly suggested that women are only as valuable as their youth and beauty. Much like the backlash against some of his policies, Trump will not listen to anyone who tries to educate him otherwise — but he does pay attention when his ego is bruised.

In Michael Wolff's book, Fire and Fury: Inside the Trump White House, the writer claimed that even Trump's daughter Ivanka makes fun of her dad's hair.

She treated her father with a degree of detachment, even irony, going so far as to make fun of his comb-over to others. She often described the mechanics behind it to friends: an absolutely clean pate — a contained island after scalp-reduction ­surgery — surrounded by a furry circle of hair around the sides and front, from which all ends are drawn up to meet in the center and then swept back and secured by a stiffening spray. The color, she would point out to comical effect, was from a product called Just for Men — the longer it was left on, the darker it got. Impatience resulted in Trump's orange-blond hair color.

The message from journalists and concerned citizens has been clear: We will continue to hold you to the standards that you insist on holding to all people, most often women. There are limited ways to get through to the president, particularly when he's written off the opinions on the vast majority of the news media, but his vanity is a sure bet.

Trump Drank Water Like A Toddler & We Can't Get Over It

Trump Once Said "Nambia" & That Doesn't Even Exist

Behold Trump's Handshakes In All Their Awkward Glory