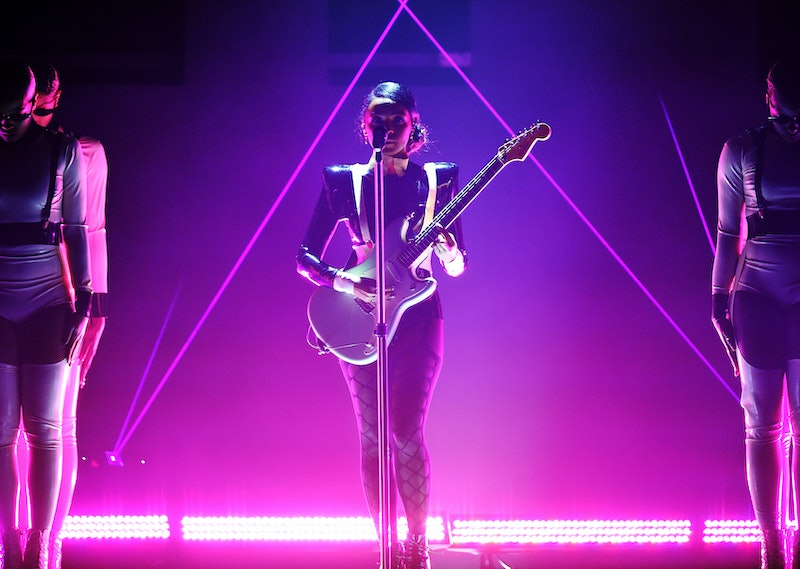 The 2019 Grammys are finally here and all your favorite artists are performing their hits throughout the night on Sunday, Feb. 10. Janelle Monáe’s 2019 Grammys performance included the return of the singer's now-iconic vagina pants from the Grammy-nominated music video for her song "PYNK."

The performance started with Monáe singing her hit song "Make Me Feel," as well as moments from the songs "PYNK" and "Django Jane," spotlighting the lyric, "Black girl magic, y'all can't stand it." Monáe took the stage with a group of backup dancers in futuristic outfits. At one point, the dancers also appeared in pink suits and the famous vagina pants that appeared in Monáe's video for "PYNK."

The artist always gives it her all on stage and the Grammys were no exception. Monáe is nominated in two Grammys categories: Album of the Year for her 2018 release Dirty Computer and Best Music Video for "PYNK." Throughout the course of her career, Monáe has been nominated for a total of eight Grammys.

Before the Grammys, Monáe and Instagram hosted the Fem the Future brunch, which celebrated the female nominees of the music award on Friday, Feb. 8. At the event, Billboard asked if Monáe could reveal any hints about her performance at the Grammys. Her answer: "No, but it’s going to be free as f*ck."

And it definitely was. You can watch the Grammys performance in the videos below.

The return of Monáe's vagina pants delighted fans on Twitter so much. The pants were part of the artist's iconic music video for "PYNK," which shows Monáe, actress Tessa Thompson, and backup dancers sporting the vagina pants. The song's video has been praised a celebration of female sexuality. It was also nominated in the category of Best Video With a Message at the 2018 MTV Video Music Awards.

Monáe told Billboard that Dirty Computer's Grammy nominations made her feel like she was already a winner. She said, "To be recognized for work that’s truthful, honest and also not just about me, but about a community of marginalized voices, makes me feel like I’ve already won. The representation was important. It’s a beautiful thing to have your peers in the music community and those voting see something in you that they feel matters. That’s really it for me."

Monáe's Dirty Computer was released last April to critical acclaim and was named the top album of 2019 by the Associated Press, the New York Times, and NPR.

Previously, Monáe has been nominated for her debut studio album The ArchAndroid for Best Contemporary R&B Album and her single "Tightrope" for Best Urban/Alternative Performance in 2010. In 2012, she was nominated for three Grammys for her collaborations with fun., "Some Nights," and "We are Young." She received her first Grammy nod in 2008 for Best Urban/Alternative Performance for her single "Many Moons."

And now she has truly rocked the Grammy stage with her performance, iconic vagina pants and all.