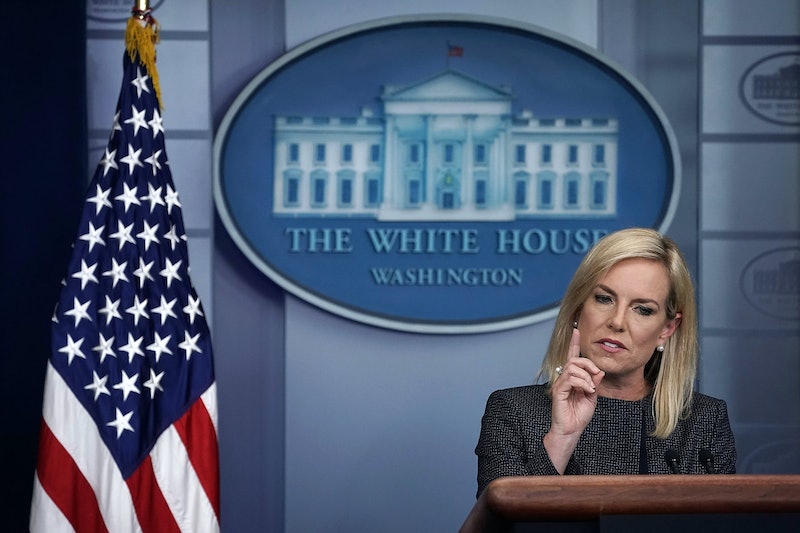 On Monday, the secretary of homeland security attended a press event in an attempt to, in her words, "help explain some of what's going on" and "clarify some things" regarding the current immigration crisis. But video of Kirstjen Nielsen's immigration press briefing left a lot of questions unanswered.

Nearly 2,000 children have been separated from their parents since the Department of Homeland Security (DHS) and Attorney General Jeff Sessions announced last month that they were introducing a "zero tolerance" policy for illegal border crossings. While parents await prosecution, their children are being held in various detention centers, because children are not allowed to be kept in jails. Both politicians and journalists have had limited access to the centers.

On Monday, reporters grilled Nielsen about policy. Per videos posted online, one reporter asked Nielsen if the separations were intended to send a message.

"I find that offensive," she said while she shook her head, according to video shared by ABC News. "No. Because why would I ever create a policy that purposefully does that?"

When a reporter responded that the policy could be used to deter people from illegally crossing the border, Nielsen disagreed.

"No," she said. "It's a law passed by the United States Congress. Rather than fixing the law, Congress is asking those of us who enforce the law to turn our backs on the law and not enforce the law."

This claim has been repeatedly debunked by several news outlets.

At another point, CNN's Jeff Zeleny asked if the way that the children were being treated would qualify as child abuse.

Nielsen went on to claim that most children in Health and Human Services' care were sent to the United States without their parents. She suggested that the children were separated from their parents at that point, not upon crossing the border.

Nielsen further denied claims that the children were being used as political "pawns," an accusation that has pervaded political rhetoric, as well as social media posts related to the crisis.

"The children are not being used as a pawn," she said. "We're trying to protect the children, which is why I'm asking Congress to act."

Congress is reportedly working on a legislative solution, but whether or not any proposed bills actually would end family separation has been hotly contested. In the meantime, President Trump has consistently blamed Democrats for the policy his administration is enforcing.

"It is the Democrats fault for being weak and ineffective with Boarder Security and Crime," Trump tweeted on Monday. "Tell them to start thinking about the people devastated by Crime coming from illegal immigration. Change the laws!"

What's actually going on is that the Trump administration has elected to enforce a "zero tolerance" policy that mandates that all illegal border crossings result in prosecution. Because every case is being prosecuted, children are necessarily being separated from their families.

In light of these events, Sen. Kamala Harris announced that she is calling on Nielsen to resign from her post.

"I’m calling on Kirstjen Nielsen to resign as Secretary of Homeland Security," she said in a tweet. "Under her watch, our government has committed human rights abuses by breaking up families along the southern border. And she has ​failed to be accountable to and transparent with the American people."

The immigration crisis has been mushrooming for several weeks, and no clear solution is in sight. There are, however, a series of petitions available for those wishing to get involved.