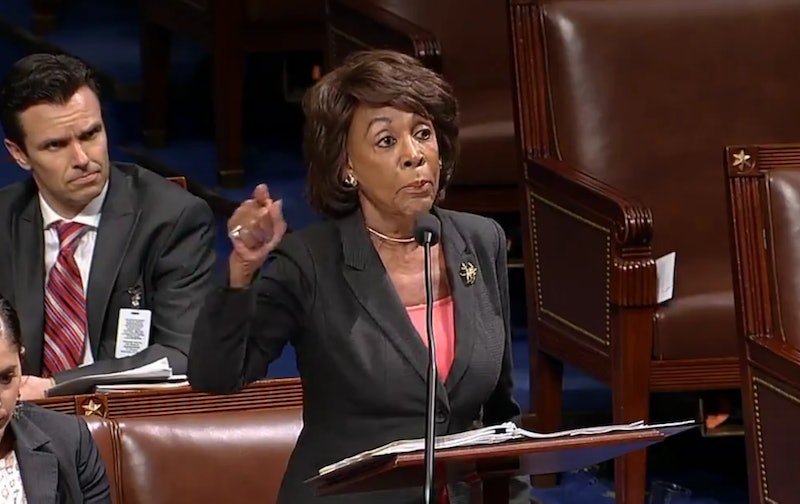 On Tuesday, on the floor of the House of Representatives, GOP Congressman Mike Kelly got in an argument with one of the highest-profile Democratic members of the House about auto lending regulations and discrimination, and it didn't go so well for him. In short, if you haven't already seen this video of Rep. Maxine Waters taking Kelly to task for telling her to "stop talking about discrimination," you're going to want to set aside a couple of minutes.

Waters, 79, has been serving in the House for decades, and has represented the state of California's 43rd congressional district since 2013. Since the election of President Donald Trump back in 2016, she's become one of the most vocal and visible of his congressional critics, going viral for her broadsides against the president both on the House floor and on cable news, and her unapologetic attitude toward the Republican Party.

On Tuesday, the official Twitter account for the Democratic Members of the House Committee on Financial Services ― of which Waters is the ranking member ― posted the video of her back-and-forth with Kelly. It's fair to say that Waters gave no quarter, excoriating the GOP congressman, and concluding by refusing to give him even "one second" of her time.

Kelly, as shown in the video embedded above, made the remark about discrimination moments after paraphrasing the president's campaign slogan, "making America great." And what's the best way to accomplish that, in his view?

"The best way to do that is to stop talking about discrimination, and start talking about the nation," Kelly said. "We're coming together as a people in spite of what you say!" Waters was not amused, to put it mildly.

"I want you to know that I am more offended as an African-American woman than you will ever be," Waters shot back. "And this business about making America great again, it is your president that's dividing this country, and don't talk to me about the fact that we don't understand what happens―"

Kelly interrupted her to ask her to yield the floor back to him, but she refused. "I will not yield, I will not yield," Waters said. "Don't tell me that we don't understand ― that's the attitude that's been given toward women time and time again."

Waters was then interrupted by the House chair, who reminded her to address her remarks to him, rather than directly to Kelly.

"I respect the chair," Waters replied, "but don't stop me in the middle when you didn't stop him in the middle. And so I shall continue: Don't you dare talk to me like that, and think that somehow women don't understand what goes on on the floor of automobile dealers." The House chair then once again chastised Waters, telling her to address her remarks to him rather than Kelly.

"I will continue to do that, however, I don't appreciate that you did not interrupt him when he was making those outrageous remarks about him knowing more about discrimination than I know about discrimination," Waters continued. "I resent that, and I resent the remark about making America great again. He's down here making a speech for this dishonorable president of the United States of America.

Waters' fiery statement echoed one of the past moments that helped launch her into the mainstream consciousness.

It was back during the confirmation hearings for Treasury Secretary Steven Mnuchin; Waters was questioning Mnuchin, but he wasn't giving direct answers, and in the process was eating up some of her allotted time. That led her to proclaim that she was "reclaiming my time," a phrase that she's now synonymous with.

In short, the Trump era has provided Waters a major platform, and she's clearly not shy about using it. It was a big week for her for another reason, too ― she just made Time magazine's annual list of the 100 most influential people in the world.