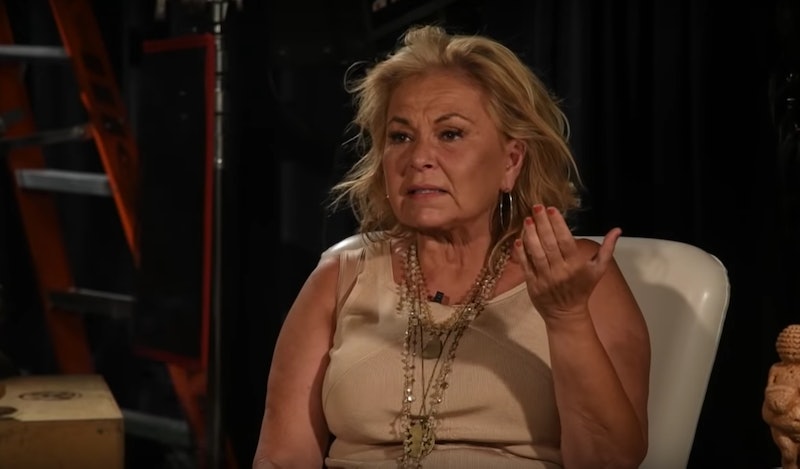 Despite having faced a multitude of criticism and condemnation throughout her career, Roseanne Barr is still haunted by the tweet that brought her show's revival to a screeching halt. In a short, but rather to the point YouTube video released Friday, a visibly agitated Barr defended her Valerie Jarrett tweet by screaming six words into the camera: "I thought the b*tch was white!"

Barr's latest attempt to explain away her tweet comes nearly two months after ABC canceled their revival of Roseanne, claiming her tweet about Jarrett was "abhorrent, repugnant, and inconsistent with our values." In May, Barr tweeted that Jarrett, a senior adviser of former President Barack Obama who also happens to be an African-American woman, would be the result if the Muslim Brotherhood and Planet of the Apes had a baby.

The tweet, which has since been deleted, was widely criticized as racist and sparked heavy criticism from Barr's co-stars, fans, and critics.

Initially, Barr claimed she'd been under the influence of the sedative Ambien when she'd written the tweet. She later said she'd been misunderstood and that her tweet was really about anti-Semitism. "I've never practiced 'RACISM' in my entire life," she tweeted in June. "Rod Serling wrote Planet of The Apes. It was about anti-semitism. That is what my tweet referred to — the anti semitism of the Iran deal. Low IQ ppl can think whatever they want."

She reiterated her use of Ambien in an interview with Rabbi Shmuly Boteach conducted over the phone shortly after she'd been fired by ABC. "That's no excuse, but that is what was real," the comedian said after claiming she'd written the tweet at 2 a.m. on Ambien. "There's no excuse. I don't excuse it. It's an explanation. I was impaired, you know?"

In that same interview, Barr also told Boteach that she thought Jarrett was white. "I did not know she was a black woman," she said. "When ABC called me and said, 'what is the reason for your egregious racism,' I said, 'Oh my God, it is a form of racism.' I guess I didn't know she was black and I'll cop to it, but I thought she was white."

Barr's YouTube video dropped 10 days after the star told fans she would — and then wouldn't — do a TV interview. "I decided that I won't be doing any TV interviews, too stressful and untrustworthy 4 me & my fans," the actress tweeted July 10, a day after claiming she'd be doing a TV interview. "I'm going to film it myself & post it on my youtube [sic] channel... the entire explanation of what happened & why!" Barr said she wanted to "speak directly" to her fans "and cut out any middlemen."

ABC has since said it will continue on without Barr, turning its Roseanne revival into The Conners.