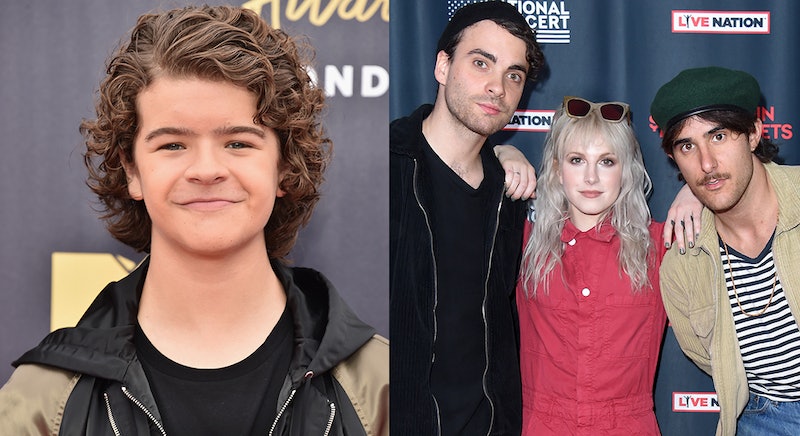 Concert-goers may have thought they were in the Upside Down when a Stranger Things star joined their favorite band onstage. But the video of Gaten Matarazzo singing with Paramore on 2007's “Misery Business” at Brooklyn, New York's Barclay's Center on Tuesday, June 26, was anything but strange.

As reported by Alternative Press the following day, it was a family affair when Matarazzo — who plays lovable curly-haired teen Dustin in the Netflix sci-fi hit Stranger Things — joined Paramore onstage with his sister Sabrina and his brother Carmen. Maybe they looked like naturals because they had some practice: Sabrina is also in Matarazzo's band Work in Progress which has famously covered Paramore's "Misery Business" in the past, as well as Fall Out Boy's "Sugar, We're Goin' Down" and "Everlong" by the Foo Fighters, to name a few.

After his surprise guest performance, the 15-year-old actor tweeted this thanks to Paramore "for letting us jam out with you guys.” In turn, the alt-rock band's lead singer Hayley Williams replied with a Twitter rave review, writing: "the harmonies were so right. was NOT expecting that level of right-ness. thanks for hangin with us & our friends." Clearly, the Matarazzo kids came to Barclays ready to rock and left the band in awe as much as the crowd of screaming fans.

That praise was undoubtedly a high note for the siblings who posted an Instagram photo with Paramore from Work In Progress's account, along with the caption “Meeting some true icons.” They had plenty to be proud of: After all, it was their cover of “Misery Business” last year at Asbury Pary, New Jersey's iconic music venue The Stone Pony, that initially rocked Paramore's world.

By January of this year, Williams was so taken by video of the band's "Mis Biz" performance, that she tweeted an "open invite to crash a pmore stage and thrash those luscious locks around (& harmonize, obv) whenever the spirit (of rock) leads you." Naturally, the Stranger Things actor tweeted an enthusiastic "Dude!! Yesss!!!! Let’s make this happen!," to which Williams offered to send Paramore's tour schedule for him to "just pick a date."

Although Work in Progress has primarily performed covers in the past, Matarazzo previously sang the praises of his group's versatility. "Some cover bands focus on a specific genre, or specific type of rock, where they almost need an “identity” or to have their thing," he told The Aquarian Weekly in January. "We don’t feel that way; we don’t need to just play one genre! We just want to play music that everyone likes, that we like ourselves. Not many bands go from Red Hot Chili Peppers, to Paramore, to Sublime, so it’s a nice setlist!"

As for whether or not there any specific artists he likes covering the most? Matarazzo added:

"Pearl Jam and Green Day, it’s a tie. Green Day was one of my first concerts, we’ve loved them our whole lives. Also, my dad loves Pearl Jam. We’ve seen them a lot of times, and he got me into them. Eddie Vedder’s voice was one I was also fond of immediately, I feel comfortable singing his songs, and Billie Joe Armstrong!"

While he's now a jam-session natural, Matarazzo actually got his start in music with a very different genre, originating the role of Gavroche in the 2014 Broadway revival of Les Miserables. And fans almost missed out on seeing his trademark smile anywhere but on the stage. "When I was younger, I definitely thought musical theater was sort of more pure than film," he said in an interview with Paste Magazine last year. "I used to say I’d never go to film because we had to get it right the first time in musical theater. But then, of course, I started doing film and realized I loved it." Phew.

As fans are well aware, he's also not the only Stranger Things cast member to play in a band when not he's not filming the Netflix series. Finn Wolfhard AKA Mike Wheeler plays in Vancouver-based Capurnia, while Joe Keery, who plays everyone's favorite Season 2 "babysitter" Steve Harrington is in a group called Post Animal.

After seeing the newest videos, one things for sure: Whether Matarazzo is hunting demogorgons or singing in front of thousands of fans, it's impossible not to want to be in his entourage.