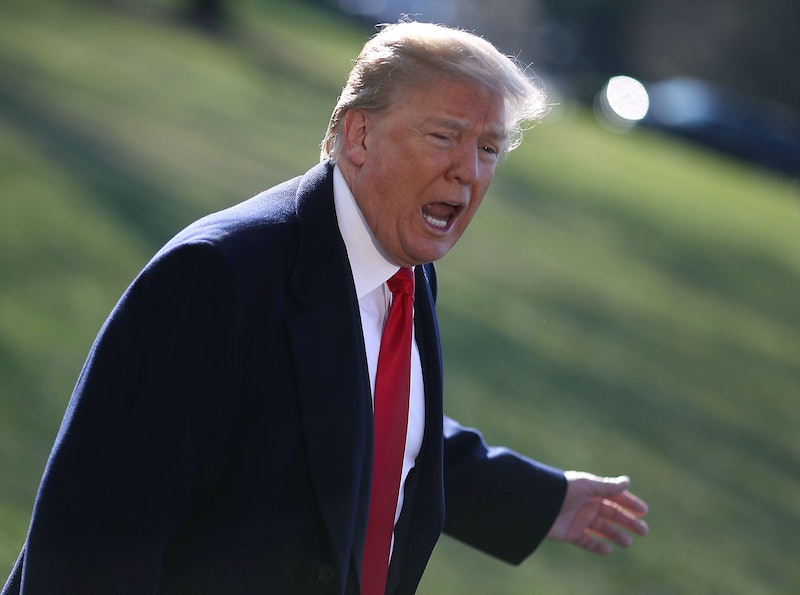 While inspecting prototypes for a U.S-Mexico border wall Tuesday, President Trump compared immigrants to "professional mountain climbers" and stressed the need for a wall that immigrants "can't climb." Trump made the comments during a press conference in San Diego, marking his first visit to California as president.

"Getting over the top is easy," Trump said about his proposed border wall. "These are like, professional mountain climbers. They're incredible climbers. They can't climb some of these [prototype] walls. Some of them, they can. Those are the walls we're not using."

Trump's proposal to build a border wall was one of the cornerstones of his presidential campaign, and he's pledged to build it repeatedly since taking office. However, the project has received no congressional funding, and although Trump has said that the U.S. will "have Mexico pay for that wall," the Mexican foreign ministry refutes this, announcing in August that the country "will not pay, under any circumstances, for a wall or physical barrier built on US territory along the Mexican border." As a result, construction on the hypothetical project is not underway, and no start date has been announced.

As Trump arrived in southern California, a large sign reading "Trump, we will not pay for your wall" was draped over the fence between San Diego and Tijuana, according to the New York Daily News.

"Every day, criminals and terrorists try and infiltrate our country," Trump said on Tuesday. "The border wall is truly our first line of defense, and it's probably, if you think about it, our first and last, other than the great ICE agents and other people moving people out." In December, the Department of Homeland Security announced that illegal border crossings into the U.S. are at their lowest rates in 46 years.

Trump announced his plan to build a U.S-Mexico border wall during his campaign launch speech in June 2015, and it quickly became a centerpiece of his presidential run.

"I would build a great wall, and nobody builds walls better than me, believe me, and I’ll build them very inexpensively," Trump said. "I will build a great, great wall on our southern border. And I will have Mexico pay for that wall."

In January, Trump requested $18 billion from Congress over the next decade to begin the first phase of construction on a wall, which the Trump administration estimated would allow roughly half of the U.S-Mexican border to be secured with new or reinforced fencing by 2027. This plan would require an additional $15 billion in funding to pay for watch towers, security personnel, surveillance equipment and other associated costs, bringing the total estimated cost to $33 billion for around half of the border wall. However, Congress didn't allocate any of that money.

Trump speculated in September 2015 that a border wall would cost "$4 or $5 billion."

Trump's insistence that Mexico fund the wall — a demand Mexican officials have consistently rejected — has caused tension between the U.S. and its ally on the southern border. Mexican President Enrique Peña Nieto had planned to make his first official visit to the Trump White House in February or March, but according to the Washington Post, he agreed to do so only if Trump publicly stated that Mexico wouldn't be paying for the wall. Trump refused to do so, and Peña Nieto cancelled the trip. Trump confirmed those reports on Saturday, claiming at a rally that he told Peña Nieto there was "no way I'm making that deal."

The wall prototypes that Trump visited on Tuesday cost taxpayers in San Diego roughly $2.6 million dollars to build, according to Newsweek.