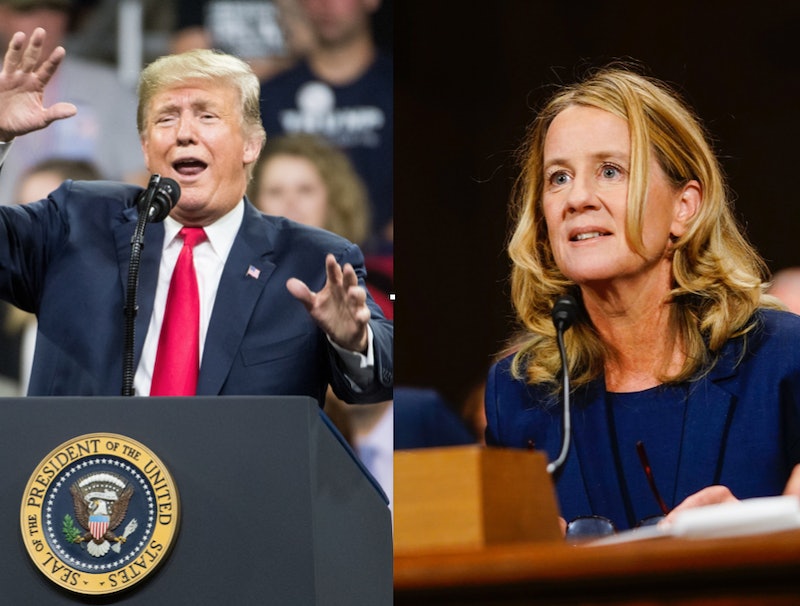 At a rally in Mississippi Tuesday night, the president mocked the woman accusing Brett Kavanaugh of sexual assault. Trump's jeers drew support from his audience but widespread outrage from Democrats and others, who condemned him for ridiculing her. On Wednesday, videos of Christine Ford's testimony vs. Trump's recap of it show POTUS got some key points wrong. Kavanaugh has categorically denied the allegations against him.

Trump's mocking question-and-answer recap of Ford's testimony painted her as an unreliable source. "How did you get home?" he asked. He answered himself, "I don't remember."

"How’d you get there?... Where is the place?... How many years ago was it?... What neighborhood was it in?... Upstairs, downstairs, where was it?" He followed each question with "I don't remember," or "I don't know." The crowd at the rally cheered for the president with each new question posed.

The next day, videos posted by MSNBC's Ari Melber, and the media company NowThis on Twitter cut together Ford's testimony with the president's speech, giving an answer to each of his questions.

"What neighborhood was it in?" Ford says, "I attended a small gathering at a house in the Bethesda area."

Ford was transparent in statements to The Washington Post, and in her testimony, about the fact that some details were hazy in her memory. But she said others, like Kavanaugh's identity, and the "uproarious laughter" she says she heard from him and Mark Judge during the alleged assault, remained "indelible" in her mind. In particular, she couldn't remember whose house the alleged assault took place at, how she got there, or the exact date when it occurred. But even so, Ford had actually given detailed answers to most of the questions Trump had reenacted during his rally.

"Upstairs, downstairs, where was it?"

"I went up a very narrow set of stairs leading from the living room to a second floor to use the restroom," Ford is shown testifying. "When I got to the top of the stairs, I was pushed from behind into a bedroom across from the bathroom."

Countering the backlash against yesterday's rally, prominent Republicans have supported the president's portrayal of Ford. "Everything he said is factual," Sen. Lindsey Graham said in an interview at The Atlantic Forum on Wednesday. Kellyanne Conway also stood behind Trump, arguing that he had treated Ford "like a Fabergé egg."

"The president is pointing out factual inconsistencies," Conway said from the White House on Wednesday morning. In her first daily press briefing in almost a month, press secretary Sarah Sanders aligned with Conway's defense. "The president was stating the facts," she said, refusing the insinuation that Trump's words were meant to mock Ford.

Other Republicans, including key votes in Kavanaugh's confirmation, Sens. Jeff Flake, Lisa Murkowski, and Susan Collins appeared deeply dismayed by the president's behavior. "I wish he hadn't have done it. I just say it's kind of appalling," Flake said on the Today Show Wednesday morning. Murkowski described the incident as "wholly inappropriate and in my view unacceptable," while Collins deemed it "just plain wrong," in a Politico report.