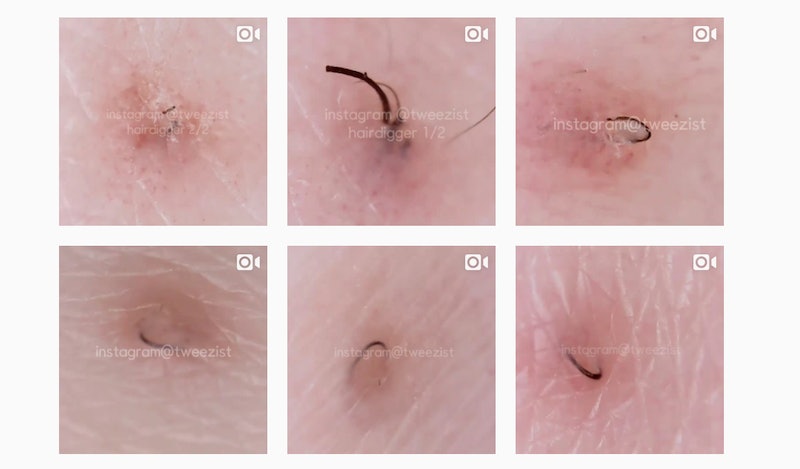 Warning: This content may be so disgusting that it makes your stomach churn. Or it just might be so horribly satisfying that you're forced to explain why it brings you pleasure. Prepare to be grossed out by the Tweezist Instagram account, which shows ingrown hair extractions and nothing else. Amassing over 16,000 followers and counting, it's practically the new Dr. Pimple Popper.

You'd think that icky videos of blackhead extractions or a "unicorn" cyst removal would be enough to keep social media satisfied. Sandra Lee, aka Dr. Pimple Popper, even recently popped a gigantic pimple for Hurricane Harvey relief, so it's obvious that people are actually willing to pay for this kind of disturbing entertainment. But the removal of ingrown hairs just may be gross enough without going too far.

With no scalpels, blood, or pus involved, things don't get incredibly graphic or gross in Tweezist's extraction videos. That may explain why the account has gotten so much attention already. You know exactly what to expect from every video, and each one gets more satisfying than the last. There are already over 150 videos available for your viewing pleasure.

It's so disturbing, yet it's so hard to look away. Your eyes almost want to close, but there's just something so rewarding about seeing a pair of tweezers finally grip a hair good enough to remove it. Of course, the average video generates tons of comments, from "Does it hurt?" to "What part of the body is this?"

As explained by the anonymous creator of Tweezist in a post, most of the ingrown hairs come from her own legs. The internet just can't seem to get enough of these magnified extractions.

The account had gotten so popular that Tweezist was forced to solicit help from her followers in order to add official credits to her posts. Videos that were once watermark-less, now have an "instagram@tweezist" stamp across the middle. Because you've got to give credit where credit is due.

The occasional post contains bleeding, but rest assured that Tweezist always gives a fair warning so viewers can watch at their own risk. Sometimes, the hairs are even infused with scabs. And that's where things can get pretty cringe-worthy.

But there's nothing like the those videos where the ingrown hair is a little stubborn. After so many unsuccessful attempts at gripping the tiny sucker, you almost want to scream with joy when it's finally removed. When Tweezist wins, we all win.

It's not always leg hairs that get the action though. A few Tweezist posts show the ingrown hair whisperer plucking beard hairs. They likely won't make you as squeamish as the other videos, but they're nonetheless satisfying. Seriously, those have got to be some of the best tweezers money can buy.

There's plenty of videos in Tweezist's catalog, so she's obviously no stranger to hair removal. Maybe she's even a hair removal expert. Still, one has to wonder if this is the proper way to go about extracting ingrown hairs. It doesn't look incredibly painful, but then again, these are soundless videos.

Perhaps, this wouldn't be your go-to guide for getting rid of an ingrown hair. Still, it is fun and moderately disturbing to watch.

It's safe to say that you could get caught up binge-watching a few Tweezist videos without blowing chunks. When you need to switch up from ogling over pimple popping, you may as well keep the momentum going with a few hair extractions.

Yep, the internet has officially gotten downright disturbing. But rest assured you are not alone in your sick pleasure.