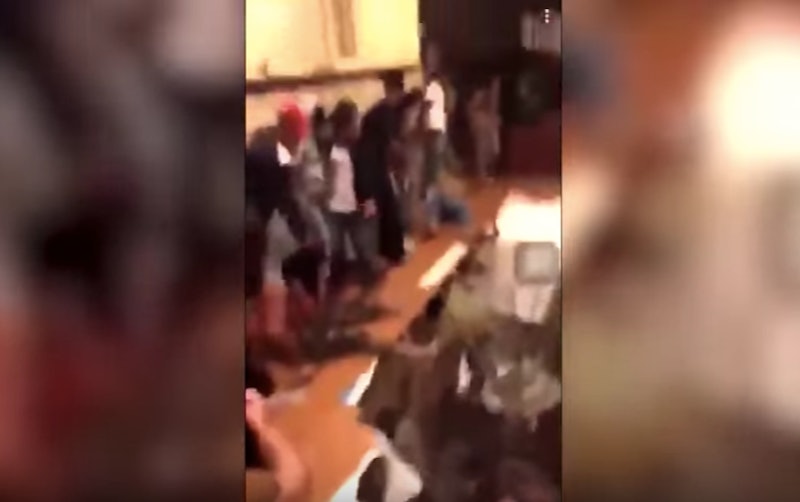 Thirty people were reportedly injured after the floor of an apartment complex near Clemson University collapsed during a party, BuzzFeed News reported. Though Clemson police said no one suffered life-threatening injuries, all 30 people were transported to three local hospitals for treatment, CNN reported. Some partygoers managed to take videos of the floor collapsing, and they've since gone viral.

Jeremy Tester told CNN that Clemson University students and residents who lived nearby were dancing and jumping in Woodlands at Clemson apartment complex's clubhouse on Saturday night when the floor started making strange noises. “You could hear the floor about to go through, kind of,” Tester told CNN, “but nobody thought it was going to happen. They just kept going.” Another witness said he saw people jumping and then heard a "boom," according to the Associated Press.

As a few viral videos show, the clubhouse room is full of people who are dancing, and suddenly the floor just drops out from beneath them, and dozens fall down into the basement below. Clemson City Police said no one was trapped after the collapse, but, as videos show, the incident appeared terrifying for partygoers. Though the videos aren't graphic, the content might be disturbing or scary to some viewers.

Once the floor collapsed partygoer Franzie Pendergrass told CNN affiliate WYFF News 4, "All you seen was falling, everybody’s hands up in the air.”

Larissa Stone told the Anderson Independent Mail that a popular song was playing when everyone started jumping. "The beat was about to drop and literally the whole floor collapsed,” she told the Independent Mail. “It happened so quickly. I stood up, and everyone was trying to climb out. People are under other people. People are hurt. People are bleeding. I had blood on my sneakers. It was really bad.”

WYFF News reporter Dana Griffin shared a photo from Joseph Lord of the clubhouse floor after the collapse:

Slann reportedly sent an email to Woodlands residents with a notice that the clubhouse floor collapsed during a party, the AP reported:

The Clubhouse and pool area is OFF LIMITS to all. The clubhouse will be inspected by structural engineers as soon as possible. From there, the homeowner’s association will determine how to rebuild the clubhouse to make it safe for all residents. Our thoughts and prayers are with all those who were injured and we apologize for any inconvenience.

Clemson student affairs representatives were dispatched to all 3 hospitals where injured individuals were being transported. We’re continuing to gather information, and are encouraged by the initial reports of no life-threatening injuries.

The university also tweeted that Counseling and Psychological Services (CAPS) will be available to students affected by the incident.