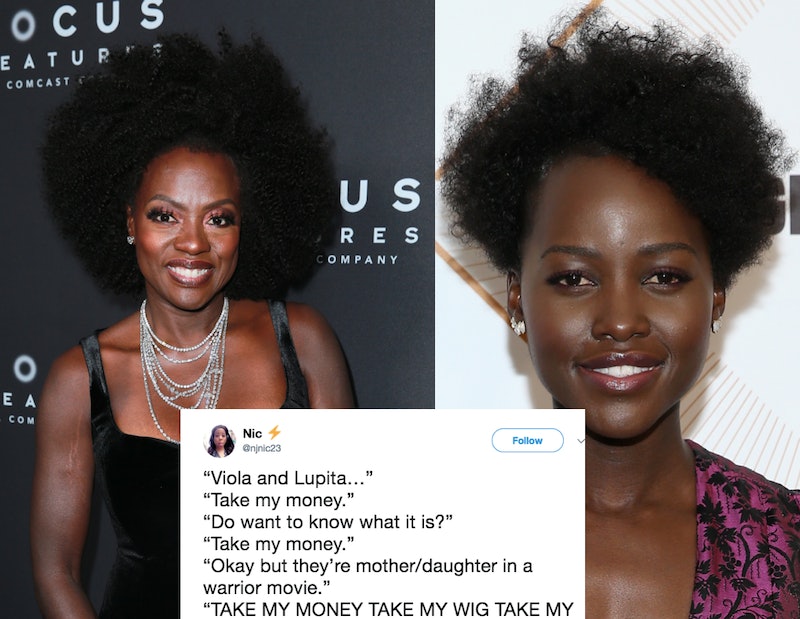 Earlier this week, it was announced that Viola Davis and Lupita Nyong'o are starring in The Woman King, and the internet can’t seem to contain its excitement about the representation of strong women in this film. Davis and Nyong'o will play mother and daughter in the movie. According to Deadline, the plot will reportedly be based on actual events from the Kingdom of Dahomey, which was one of the most powerful West African states during the 18th and 19th centuries.

Details surrounding the film indicate that Davis will step into the role of Nanisca, the general of an entirely female military group called the Amazons, while Nyong'o will portray and her daughter Nawi. Together, the two will reportedly fight back against those who have tried to enslave and threaten the livelihood of their tribe. A powerful narrative, to say the least, TriStar Pictures president Hannah Minghella expressed excitement for the forthcoming film to Deadline in a statement:

"'The Woman King' is the powerful true story of an extraordinary mother-daughter relationship. And there’s no one more extraordinary than Viola Davis and Lupita Nyong’o to bring them to life.”

Undeniable talents in the entertainment industry, Davis and Nyong'o have each won Best Supporting Actress Academy Awards (Davis for Fences in 2017, and Nyong'o for 12 Years a Slave in 2014). It's a factor which leads many to believe that The Woman King is going to be a blockbuster hit for both of them.

That said, social media went into a complete meltdown upon hearing that Davis and Nyong'o would be pairing up as mother and daughter warriors on-screen. Fans of the Oscar-winning stars quickly jumped to Twitter to share their reactions.

One fan became emotional upon hearing the news that Davis and Nyong'o would be playing mother and daughter in the film.

This commenter was overwhelmed by the cast's greatness.

Another fan was overjoyed.

The announcement had this person dancing with joy.

Someone is certain that both Davis and Nyong'o will have award-winning performances in the film.

Another fan would seemingly give anything to see this Davis and Nyong'o pairing.

This Twitter user took a moment to celebrate each and every detail about the film.

Sharing their excitement, one fan pointed the moment out as something they must have in their life — immediately.

Going off the movie's description alone, this person think the world should just get ready to hand all of the awards over to Davis and Nyong'o.

Meanwhile, this fan is totally here for it.

The Woman King announcement comes directly on the heels of the overwhelming success of Black Panther, which notably featured a predominantly black cast and a commanding army of badass women called the Dora Milaje. Highlighting the greatness of Black Panther's narrative, a film in which Nyong'o also starred, Minghella went on to summarize the importance of The Woman King's storyline, telling Deadline:

“'Black Panther' just showed us how the power of imagination and lore could reveal a world without gender and racial stereotypes. 'The Woman King' will tell one of history’s greatest forgotten stories from the real world in which we live, where an army of African warrior women staved off slavery, colonialism and inter-tribal warfare to unify a nation.”

Thanks to movies like Panther and The Woman King, the world is finally able to see, hear, and feel the true definition of black girl magic.