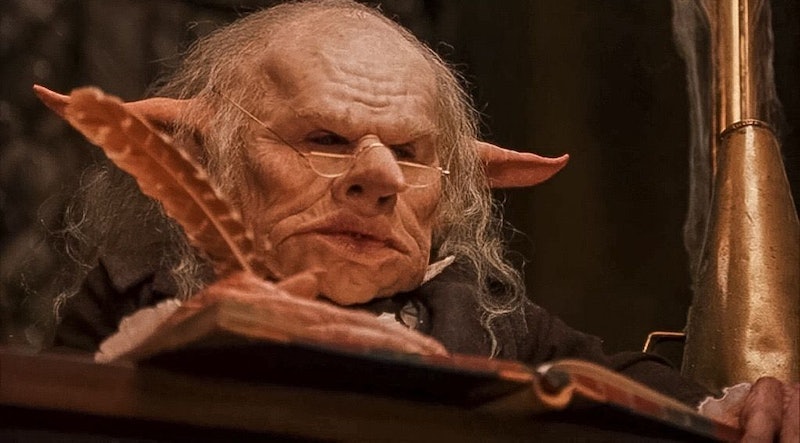 Woah. I just fully spat out my mouthful of butter beer. You know why? Well, it looks like the guys over at Warner Bros have put their Golden Galleons where their mouth is. Yes babe, they have only gone and flipping flung open the doors of one of the most secretive parts of the world of Harry Potter. The most mysterious, winding, golden, glamorous, and goblin-filled location in Diagon Alley: Gringotts Bank. You heard me. You can now visit Gringotts bank on Warner Bros' Harry Potter London tour. Well, thank goodness for that, because I totally lost my wizarding debit card the other week. (JK, as if a wizard needs a debit card, they are the OG contactless users.)

Warner Bros Studios Tour London has announced that this will be their largest expansion since they opened. They have actually bolted on the original 16,500-square-foot set of Gringotts Wizarding Bank. Yikes. That is like the square footage of a Real Housewife's gaff. The set is pretty much identical to what you've seen in the magical movies, with a ridonculous-ly huge hall; marble all over the shop; bad-man pillars; chandeliers that would make a royal gasp; the nasty old Lestrange family's vault; and, of course, all that bling.

Warner Bros have brought all the props out for show, too. I mean, over 210,000 coins were created for the Deathly Hallows films alone, and you'll be able to get up close and personal with these, as well as the desks belonging to the grumpy old goblins that work at Gringotts. (Which is pretty much every goblin's nightmare, considering how fiercely private and secretive they are known to be.)

Sadly, you will have to wait until 6 April to actually access Gringotts, but, y'all, you know that is absolutely worth the wait. Because everyone wants to have a little nosey around Griphook's old haunt.

Who doesn't remember the magic of Harry's first trip to Gringotts? The mystery of those cantankerous goblins, who's terrible customer service was balanced by their wonderful ability to store money and keep it super safe.

Although, I guess it's not that safe, considering, you know, that time they were broken into when someone went to hunt for the Philosopher's stone, and that other time Hermione literally cruised in while disguised as Bellatrix Lestrange. Both the sword of Gryffindor and Helga Hufflepuff's Cup were holed up in the Lestrange vault, so it was pretty surprising that she got inside. But, lucky for you, now you can too!

And, y'all, have you actually been to Harry Potter Warner Bros Studio Tour London? It is actual magic. You get to see the Great Hall, the Gryffindor common room, and, of course, Diagon Alley. And the new attraction of Gringotts will be included in the price of your ticket. Erm, hello bargain alert.

You are able to book tickets now, so you best get to it, because you know it will be super busy after the launch of this lit AF attraction.