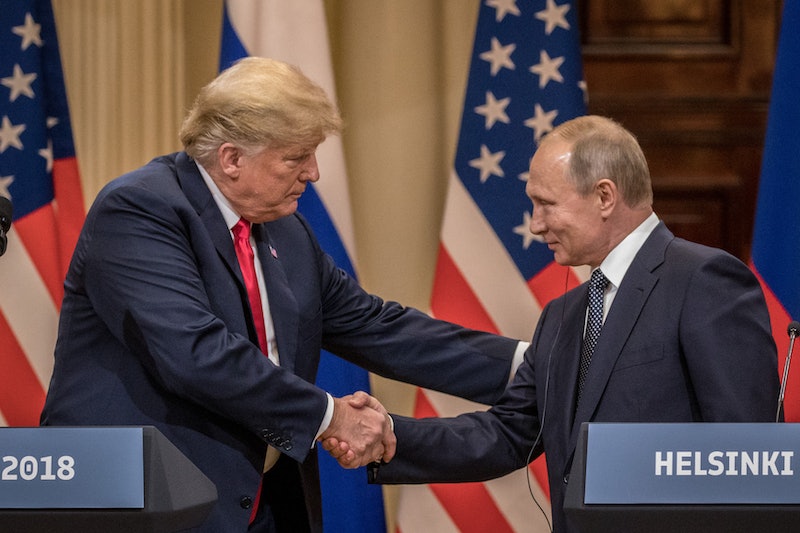 A day after President Trump opted out of paying his respects to American soldiers killed in World War I because of the rain, he looked giddy as another world leader appeared at the Paris event marking Amistice Day and the 100-year anniversary of the end of the war. Coming to the stage after other European leaders had gathered, Vladimir Putin gave Trump a thumbs up — bringing even more attention to the president's behavior while in France.

The interaction was caught on video. As the Russian president came close, Trump was all smiles. The two shook hands and Putin gave him the thumbs up. Trump then patted Putin on the back. Other European leaders' interactions with the Russian leader appeared to be far more serious.

On Twitter, the reaction was harsh. "He wants Putin to approve of him so badly, it's like a child seeking a parent's love," Democratic strategist Peter Daou wrote. Hashtags with video uploads included #PutinsPuppet.

The world leaders were gathered under the Arc de Triomphe on Sunday — protected from the rain — to mark the 100th anniversary of the end of World War I. Trump and first lady Melania were in the front row, immediately next to Germany's Angela Merkel. French President Emmanuel Macron went on to give a speech condemning nationalism, considered by some an implicit criticism of Trump.

"Patriotism is the exact opposite of nationalism: nationalism is a betrayal of patriotism," Macron said, addressing fellow world leaders and the public. "By pursuing our own interests first, with no regard to others’, we erase the very thing that a nation holds most precious, that which gives it life and makes it great: its moral values."

Trump and Putin were the only world leaders in attendance who did not walk down the Champs-Elysees to the ceremony. Both arrived by car; it was raining. On Saturday, Trump canceled his visit to Aisne-Marne American Cemetery because of the rain; White House Chief of Staff John Kelly went in his place.

Before the event on Sunday, Trump's motorcade was approached by a FEMEN protestor who had "face peacemaker" and "hypocrite" written on her body. She ran to within just a few yards of the president's vehicle when police apprehended her.

Trump and Putin had been planning to meet again during their time in Paris, but that has since been called off. The two decided that they will wait until the G20 in Buenos Aires, Argentina, at the end of November and beginning of December. Putin shared the decision with RT France.

Sunday was the first time the two leaders had seen each other since their Helsinki summit in July. The video would suggest they were happy to be reunited.