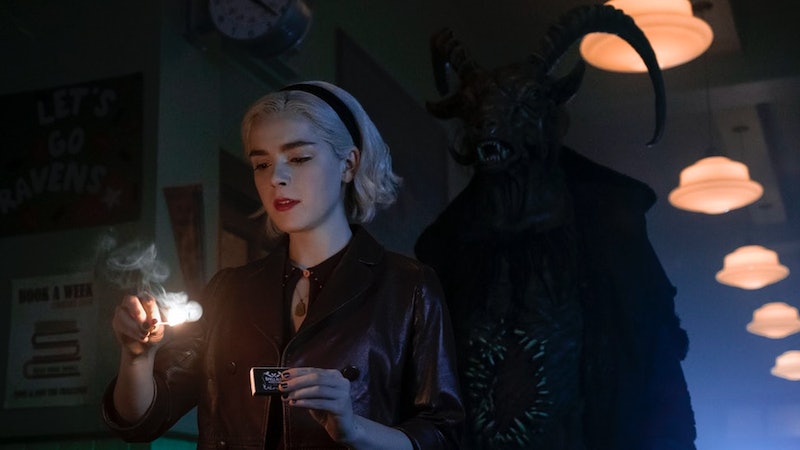 From "The Chilling Adventures of Sabrina," photo courtesy of Jeff Weddell/Netflix

To say witches are having a moment — as the teenage protagonist of The Chilling Adventures of Sabrina did in a recent episode — would be an understatement. Between Sabrina and American Horror Story: Coven, Suspiria and The Love Witch, there sure has been a lot of witches in movies and on TV recently. Add to that the proliferation of witchy imagery on Instagram and Tumblr, and the resurgence of astrology, tarot, and other holistic and metaphysical activities as tools for self-care, and it’s clear that people are enchanted and empowered by the rich symbolism of this movement. That this witchcraft Renaissance happening now is notable: Many women are justifiably angry, and so what if they just want to hang with their besties to binge-watch horror movies, eat cookies, brew potions, and hex the President?

Pam Grossman, host of the podcast The Witch Wave, has been exploring and researching the history of witchcraft for years now. Before launching her podcast in 2017, she created the occult blog Phantasmaphile, and wrote the short-but-lovely book What is a Witch, an “illuminated manifesto” about witchcraft through history. Her new book Waking the Witch, titled after a haunting song by Kate Bush, explores witchcraft’s origins, significance and expressions in popular culture. Subtitled “Reflections on Women, Magic and Power,” the book is part memoir, part cultural critique, and part exploration of why and how the witch figure is resonating so powerfully now.

"Social media has been a huge driver for this, and it’s obviously crescendoing," Grossman tells me in a phone interview. "For some people, it’s more about the fashion or some other aspect of the culture of witchcraft. But I don’t think that should be trivialized. People are gravitating towards this archetype that represents the female experience in all its complexity, light and dark. More people are also wanting an alternative spiritual experience outside the framework of organized religion, and I think witchcraft provides that."

Grossman and I are both practicing witches, and we both lived through the intense witchcraft boom of the late 1990s, which took off, in part, because of the cult film The Craft, released in 1996. The film was a somewhat cautionary tale about dabbling too far into the magical for selfish reasons, but its ultimate message about "natural" (i.e., born with it) witchcraft was powerful, and it inspired thousands of teenage girls and women to explore Wicca. The internet was still in its infancy, and social media as we now know it was nonexistent, but girls and young women were able to network and order books and share their thoughts online without having to worry about being punished by parents or bullied by peers. As witchcraft has grown more mainstream, the general public has become a bit more savvy, understanding that Wicca is a religion and that witches aren’t devil worshippers — recent episodes of CAOS notwithstanding.

"More people are also wanting an alternative spiritual experience outside the framework of organized religion, and I think witchcraft provides that."

"Chilling Adventures of Sabrina is definitely having a huge influence on young people," Grossman says. "It’s so unapologetically inclusive and feminist, with transgender characters and representations of different sexualities. But the best thing is the show’s main thrust — how Sabrina tries to overthrow the patriarchy in the Church of Night. It’s really sly in its message. Some people think it’s giving Wicca [the acronym W.I.C.C.A. is given to a school club formed by Sabrina’s friends, the Women’s Intersectional Cultural and Creative Association] a bad name because of all the satanic elements, but the whole point is that it’s satire. Even the devil is a completely patriarchal figure.”

Indeed, Sabrina’s snarky rebellion against the patriarchy is a spirited approach that effectively balances the portrayal of the resistance efforts in, say, The Handmaid’s Tale (a show that features some subtle parallels to the Salem witch trials), where resisting is dangerous and terrifying, yet still necessary. The fact that Sabrina can just openly defy Lord Blackwood is a stark contrast to Offred’s need for secrecy and caution, but both shows offer models for resistance based in witchy wiles. As witchcraft beliefs and practices become more familiar to the general public, there’s an increasing number of films and movies ready to capitalize on the craze, portraying witches not just as figures of fantasy or horror, but as women with real life attributes and problems.

Grossman also loved the comedy in Anna Biller’s retro artsy horror film The Love Witch, a 2016 film that quickly attained cult status for its decadent visual style and its edgy take on sexual politics and witchcraft as feminine empowerment. "I adored that film because Elaine is such an iconic character. To show a bloody tampon as part of a magic spell is so badass and subversive," she says. "At the same time, it also plays with stereotypes of women and femininity; it’s such a lush, beautiful film and also really funny. I’d love to see people talk more about the archetype of the witch and its humorous aspects; witches are tricksters and shapeshifters. The idea of a witch cackling is to me so joyous but also such a transgression, because women aren’t supposed to make noise."

The Love Witch definitely has its fans (I am one!) but it was not without controversy. The main character, Elaine, concocts herbal potions and poppets to sell in high-end occult shops, performs elaborate spells to find a lover, becomes quickly infatuated with horrible men, and leaves a trail of bodies in her wake. Some witches thought people would get the wrong idea about who they are and what they do from watching the movie. It’s a commonly-held tenet of Wicca that love spells should never be done in ways meant to interfere with someone else’s free will. Still, a quick search for love spells on Etsy yields a dizzying array of products.

"The idea of a witch cackling is to me so joyous but also such a transgression, because women aren’t supposed to make noise."

Love magic is one thing; sex magic is still another. But what about black magic? Do witches use magic to cause harm? The “Law of Three” followed by many modern witches says that any magical energy put out into the world returns on the witch threefold, so doing harmful magic is ill-advised. But the most popular witchy narratives are full of darker magics, some of them violent in the extreme, like American Horror Story: Coven, which features witches happy to mete out death and destruction.

'Waking The Witch: Reflections On Women, Magic, and Power' by Pam Grossman

Despite her dislike of gore, Grossman was a fan of Coven, which she believes had a “big impact on the witchcraft movement in social media." She also loved the casting of Angela Bassett, who played Marie Laveau, which showed "that witches aren’t just white ladies,” she says.

Indeed, the show featured several Black witches, including one played by Gabourey Sidibe. In the later iteration of American Horror Story, Apocalypse, actress Adina Porter played a witch and actors Billy Porter, BD Wong, and Jeffrey Bowyer-Chapman played a trio of well-dressed warlocks. In her book, Grossman talks about the importance of intersectional feminism in the witch community. "My feminism and my witchcraft are interlinked, so just as one’s feminism needs to be intersectional and diverse, so does one’s spirituality," she says. "A lot of what I’m learning is through asking questions and listening and doing lots of reading, and letting people of color lead the conversation."

Like many contemporary witches, Grossman has been both a solitary practitioner and has worked in covens. Her coven in NYC is fairly diverse, and there’s no central authority or leader (a “high priestess”) as is often traditional. "I wanted us all to take turns leading; it’s very important to me that the community we’re building together has a multiplicity of expressions, races, genders, socioeconomic backgrounds," she says

It’s tempting to think that witchcraft can only remain a trend for so long, and that it will recede again — then pop up for another revival in a decade or so. But the near-ubiquitous presence of witches in fashion, entertainment, and social media suggests they aren't going anywhere any time soon.

So if witchcraft is now pervasive and culturally relevant, and witchcraft practitioners are now familiar figures in our entertainment media, where is this wave headed? Grossman thinks there’s still a lot to be done before modern witchcraft will be completely accepted, both socially and spiritually. "The average person still thinks of a witch as completely imaginary or completely diabolical," she says. "Even people who understand what modern witchcraft is have a tendency to think witches are 'crazy.' I’ve had almost 99% positive feedback, but I see some pushback on social media, usually from men. There are people who are very conservative and think that feminism and witchcraft are devilish and the downfall of western society, or it’s people on the other end of the political spectrum who think that witchcraft is ridiculous, because, honey, haven’t you heard of science? In both cases these are not people open to the idea of witchcraft as a form of spirituality."

Real-life witches can’t shoot lightning bolts from their fingers or cause widespread mayhem like they do in movies. But the figure of the witch is re-emerging for a reason: For so long, women have felt disempowered, and witchcraft is a way to reclaim their power. That sound you hear is hundreds, thousands, millions of women, cackling beneath the full moon, making noise, making plans, making art, making mischief, making history.