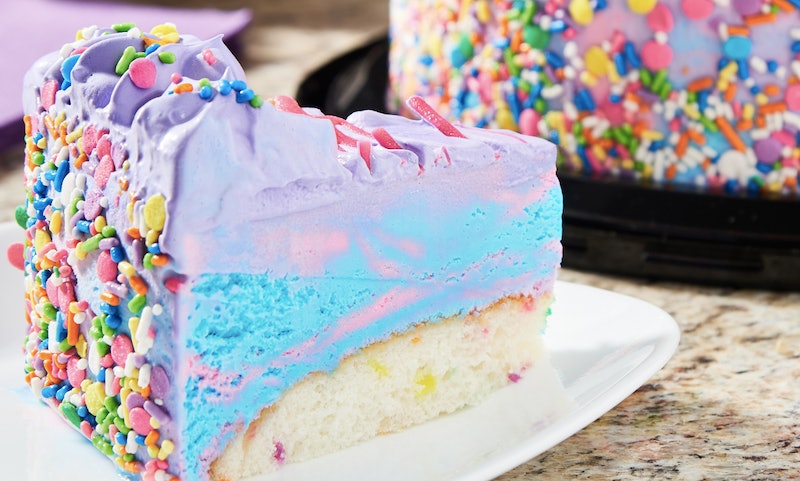 Just when you think you've reached your limit on unicorn-themed things you can ingest, another one gallops right around the corner to prove you wrong: Walmart has a unicorn ice cream cake that is nothing short of Instagram decadence. Just beholding it with my human eyes makes me feel like someone just shoved stardust down my throat and it's now glittering in my veins. It is a beautiful purply pastel-y rainbow tapestry of digestible unicorn nonsense, and that's not even the best part.

Just in case this wasn't already appealing to every glittery ventricle in your millennial heart, the ice cream cake isn't just an ice cream cake — it also has a layer of confetti cake. And that ice cream isn't just ice cream — it's cake batter-flavored ice cream. I might actually be crying sparkly unicorn tears. The cake, which is sold in Walmart locations under the Marketside brand, is on the smaller side — it says it has 12 servings, but I'd guesstimate you'd get away with six to eight — but costs a mere $14.98, which is less than the price of three Unicorn Frappuccinos (a fact I've retained in my head for this long because most of what I eat is either unicorn-themed or cheese.

If you have a hankering for one of these cakes, you can head to Walmart's website and check the availability, and spare yourself the heartbreak of rolling up to a location devoid of unicorn ice cream magic. I've been informed there are three left at my closest Walmart, so fair warning anyone in the New York City region that those are about to all be extremely gone.

This isn't the first time Walmart has forayed into the land of all things unicorn. True unicorn foodies will recall that the chain also carries Unicorn Sparkle Ice Cream, which is "cake-flavored ice cream with a magical purple frosting swirl and candy confetti pieces" that hit shelves in April. I don't know when we, as a society, came to the decision that a unicorn's inherent flavor was "cake," but I am extremely here for it. Fittingly, that unicorn-themed dessert also looks like it just threw a rave inside of a rainbow, and comes in just about every color you can find under the sun.

And just in case that wasn't enough unicorn to put in your cart at Walmart, you can also buy Unicorn Morsels — "pink and blue swirled vanilla morsels" from Nestle Toll House that you can put in just about anything from cookies to brownies to cake to directly into your mouth. In short, it is an extremely convenient time to be someone with a sugar tooth who also loves unicorns who also lives within reasonable driving distance of a Walmart. So go forth, my friends, and plan the menu for all your upcoming unicorn-themed fetes with as many desserts as your cart can hold — just be sure to call your local Walmart in advance to make sure the ice cream cake is in stock!