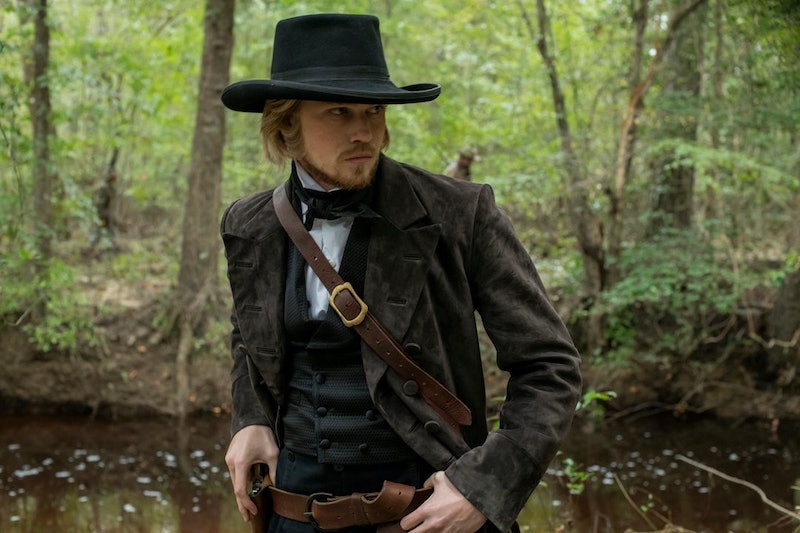 Harriet Tubman's name, story, and legacy as an abolitionist have all been immortalized in history books, museums, and documentaries. But the film Harriet (out Nov. 1) approaches the legendary American in a much more intimate and empathetic way, as it shows the pain and suffering that Harriet (Cynthia Erivo) endured while also emphasizing her determination to free others from the chains of slavery. One of the main hurdles she has to overcome is the existence of Gideon Brodess (Joe Alwyn), the former owner who leads a manhunt for the hero. While Harriet is a biopic, this particular character is largely fiction.

Gideon Brodess is the son of Edward Brodess (Michael Marunde), who, early in the film, owns the plantation from which Harriet escapes. And though it's Edward who initially refuses to free Harriet and her family despite the fact that his great-grandfather promised to let them go by an agreed upon time, Gideon becomes the main antagonist as he eventually inherits everything and decides to put Harriet and her siblings up for sale to keep the farm afloat.

But, as you can see in the trailer, Gideon isn't quick to pull the trigger on Harriet either, even as she is about to escape. In an interview with The Upcoming, actor Alwyn said of his character, "He has a complicated relationship with her, and knows her from childhood, and just has a lot of mixed, buried, confused feelings about her."

In actual history, the Brodesses did claim ownership over Tubman. There was no Gideon, however. According to The New York Times, the real Edward Brodess was the stepson of a doctor named Anthony Thompson, on whose farm Tubman was born. He became the owner of Tubman after she and her siblings were relocated from his stepfather's farm to his own in Dorchester, Maryland. According to Ancestry.com, he had four sons named John, William, Thomas, and Benjamin, and a daughter named Henrietta Mariah. There are no mentions of Edward's children in accounts of Tubman's story.

Tubman was also hired out to work for other masters before she escaped. According to NPR, she was just six years old when she was sent to work at a nearby farm owned by James and Susan Cook. She worked for them for about two years before being sent home after becoming sick. "Cook set her to watching his musk-rat traps, which compelled her to wade through the water," biographer Sarah Bradford wrote in Harriet: The Moses of Her People. "It happened that she was once sent when she was ill with the measles, and, taking cold from wading in the water in this condition, she grew very sick, and her mother persuaded her master to take her away from Cook's until she could get well." She was later hired out again as a field hand.

But The Times report notes that, as soon as Edward Brodess died in 1849, Harriet and her brothers fled from the farm. This is when she successfully escaped to Philadelphia and then began rescuing other slaves from their oppressors as a conductor on the Underground Railroad .

The movie shows not only how Tubman risked her life, going back to Maryland to save friends and family, but also shows her role in the Union Army as a military expedition leader during the Civil War — making her the first woman in U.S. history ever to hold that post. According to The Baltimore Sun, Harriet Tubman could hold her own, wielding guns during those wildly dangerous times — first for self-defense, as she led her people through the Underground Railroad, and later, in the war.

"Adventure and superheroism is inherent in the story — we didn’t want to impose it on the story," Harriet director and co-writer Kasi Lemmons told Variety. "This young woman who was very small and very strong and very fast and very, very brave. That’s what we wanted to bring."

The character of Gideon, while not based on one particular person, embodies the white patriarchy that Harriet constantly has to go up against. It doesn't matter that the old masters have died — new ones arise and continue to impose their authority over people of color. The fact that Gideon and Harriet were children together emphasizes the vast differences in what's expected of them and the power they superficially wield. Harriet, of course, breaks through all of those barriers.

More like this
What Colonel Tom Parker Was Really Like
By Morgan Leigh Davies
Sadly, You Can’t Stream 'Minions: The Rise Of Gru'... Yet
By Morgan Leigh Davies
Anne Hathaway’s ‘The Devil Wears Prada’ Anniversary Post Turned Political
By Brad Witter
You Might Want To Rewatch 'Elvis' For This Britney Spears Easter Egg
By Grace Wehniainen
Get Even More From Bustle — Sign Up For The Newsletter