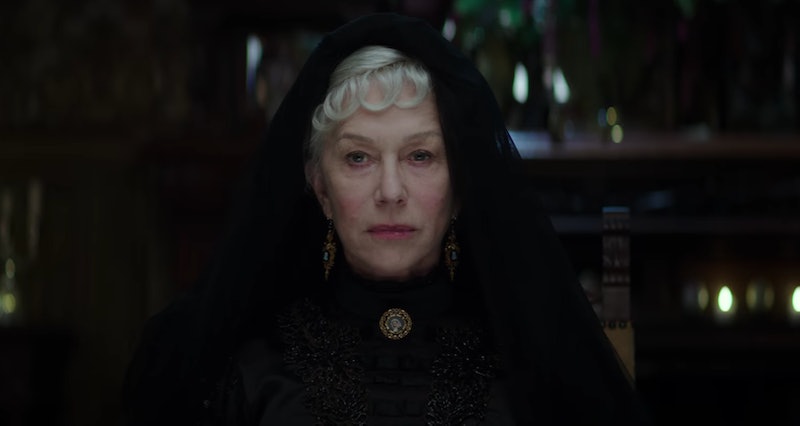 Born Sarah Lockwood Pardee in 1840, Winchester married William Wirt Winchester in 1862 and became a member of the wealthy Winchester family, owners of the Winchester Repeating Arms Company. She had one child, a daughter, who died at just a month old, and was the sole heir to the $20 million Winchester fortune when her husband died in 1881. According to Cosmopolitan, Winchester used some of that money to purchase land in San Diego, California, in 1886, and began building the Winchester house.

Legend has it that Winchester believed that the death of her daughter and her husband were caused by the angry spirits of victims killed by a Winchester rifle, and she thought that the only way to appease these spirits was to build an elaborate, never-ending house. According to a report from Smithsonian, Winchester met with a medium who told her that she had to keep building. Some believe that Winchester saw the constant construction as a direction from angry spirits, others believe that the confusing architecture was meant as a layer of protection from the spirits. Regardless of the reason behind it, the 38 years of construction resulted in a house filled with over 150 rooms and more nooks and crannies than one could count.

Granted, not all historians agree that the real Sarah Winchester was driven by angry spirits. One of the main pieces of evidence used to support the supernatural theories is the staircases to nowhere and the odd rooms built over each other, but historian Mary Jo Ignoffo doesn't see this as anything ghostly. As Ignoffo suggested in her book, Captive of the Labyrinth, these oddities were due to the 1906 earthquake, which caused serious damage to the house. Instead of repairing and rebuilding, Winchester simply sealed off damaged areas.

"After the earthquake she moved to another house," Ignoffo told California Home Design. "She did not want to make the necessary repairs — it had nothing to do with spirits." According to Ignoffo, many of the spooky details about the Winchester house were fostered after her death, when a new family bought the house and turned it into a haunted tourist attraction, now known as the Winchester Mystery House.

Another non-supernatural theory came from historian Janan Boehme, who told the Los Angeles Times that the constant construction was evidence of Winchester's philanthropy. Construction on her home was an easy way to employ people in the area. "She had a social conscience and she did try to give back," Boehme said. "This house, in itself, was her biggest social work of all." If this simple reason explains the never-ending work, then the reason for the odd designs must have an equally mundane reason. As described on Smithsonian, Winchester is believed to have designed the house on her own. An amateur architect, she would forget about rooms and design over them, sketching designs on brown paper bags or napkins.

Winchester died in 1922, leaving behind an unfinished house and hundreds of questions. Why did she build a house with mis-matched staircases and more rooms than one woman could ever need? Did she really believe she was haunted? The answers to these questions, we'll never really know, and the real Winchester remains just as big of a mystery after Winchester as ever.