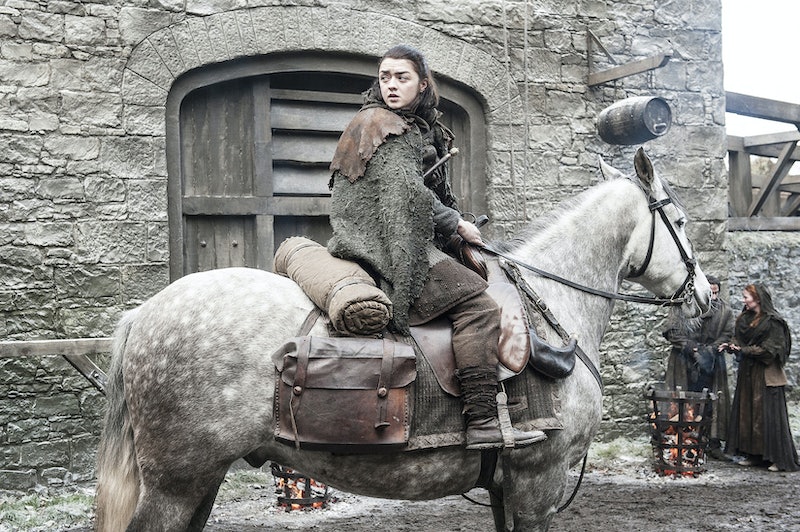 The leader of the pack is back, maybe. Not only did Nymeria seemingly return on Game of Thrones, but Arya's direwolf has amassed quite a squad. Was that really the pup all grown up? The wolf that Arya encountered went right on her way, and the scene was ultimately unclear.

I think it's safe to bet that it was Nymeria that Arya encountered. In the books, she is rumored to be running with regular wolves in the middle of Westeros. So the scene in Episode 2 of Season 7 checked out. After making the decision to go meet up with Jon in Winterfell, temporarily forgoing her revenge mission, Arya was suddenly surrounded by a group of wolves lead by a bigger wolf who looked exactly like her old pet.

Sure, Arya scared Nymeria away in Season 1 to spare her from Joffrey and Cersei's wrath. But, direwolves are smart. They should be able to recognize when their lives are being saved.

I think an animal like that must either recognize or respect a human to leave them alone so easily. I think that was definitely Nymeria. But, Arya whispered "that's not you," when the pack fled. Who was she talking about? "You" could be referring to the wolf. It could also be referring to Arya herself. She's not no one anymore, but she has changed. Maybe she was giving Nymeria the old "it's not you, it's me" breakup speech. Who knows?

Since Season 1, I've tried to attribute meaning to the Stark kids and the status of their direwolves. It never seems to properly work out. Sansa's was the first to die, and she is proving to be one of the strongest survivors. Robb and Rickon both died around the same time as their direwolves, meanwhile Bran has outlived Summer. Arya and Jon are the only two living Starks with living pets, but Nymeria is a lone wolf. Maybe it doesn't mean anything at all.

Don't you love that we were all fooled by that promo last week? The wolf in that tiny clip, just one of the minions, looked nothing like Nymeria when she was small — but we all guessed that this was coming anyway. Maybe that's the last we'll see of Arya's direwolf, if that was Arya's direwolf, on Game of Thrones. While I'd love to learn more about this fierce pack, it is a good amount of closure for Arya, and sometimes that's all we need.