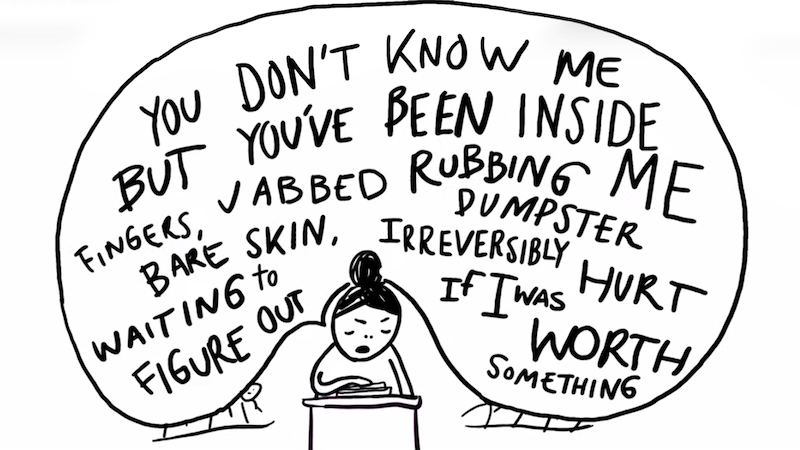 "Nobody wants to be defined by the worst thing that's happened to them." Less than one minute into Chanel Miller's powerful new short film, I Am With You, the filmmaker and author holds us all accountable for how we think and talk about sexual assault.

This article contains references to sexual assault and harassment, as do its outbound links, which may be triggering for some readers.

As the five-minute film progresses, Miller offers solidarity with other victims of sexual violence, particularly those to whom the criminal justice system has done a disservice. The video's release coincides with the launch of her memoir, Know My Name, which recounts the crime and trial, known colloquially as the "Stanford rape case," and its aftermath, on Tuesday.

In January 2015, a Stanford University student named Brock Turner sexually assaulted Miller — a graduate of the University of California, Santa Barbara — behind a dumpster at a fraternity party. She was unconscious at the time. Turner was convicted of three counts of felony sexual assault, for which he faced up to 14 years in prison, but was given a notoriously lenient sentence by Judge Michael Aaron Persky. In spite of Miller's 12-page victim impact statement, which was read aloud in court and later went viral after being published on Buzzfeed, Persky sentenced Turner to spend just six months behind bars. A greater sentence, the judge argued, would have had "a severe impact on" the criminal. Persky was recalled by voters in 2018.

From 2015 until earlier this year, Chanel Miller was known to the public only as "Emily Doe." Revealing her name was, in many ways, a way to reclaim her identity. In Know My Name, Miller challenges us to think and speak differently about victims of assault, writing: "I am a victim, I have no qualms with this word, only with the idea that it is all that I am. However, I am not Brock Turner's victim. I am not his anything." That bold statement of identity hasn't stopped Fox News and other outlets from continuing to refer to Miller as Turner's victim, but it does force all of us to think twice before attaching a criminal's name to the victim of his crime, in perpetuity.

People v. Turner held up a mirror to the world, showing it the ugly face of rape culture. Turner and his advocates blamed "party culture" and "political correctness" for his crime and punishment. His father wrote in an open letter that the ways in which Turner's life had changed after assaulting Miller, including becoming a registered sex offender, were "a steep price to pay for 20 minutes of action out of his 20 plus years of life." Turner was released after serving only three months of his intolerably lenient sentence.

I Am With You and Know My Name counter the idea that sexual assault does more harm to its perpetrators than its victims — a narrative that Turner, his surrogates, and proponents of rape culture want desperately to be true.

Chanel Miller's memoir, Know My Name, is available now. I Am With You is available to watch here, along with a behind-the-scenes look at the making of the short film.

More like this
The Most Anticipated Books Of August 2022
By K.W. Colyard
Woodstock Co-Founder Michael Lang Faced Several Lawsuits After The 1999 Festival
By Brad Witter
Beyoncé & Madonna’s “Break My Soul” Remix Honors A Group Of Black Icons
By Stephanie Topacio Long
Why 'Black Bird' Suspect Larry Hall Recanted His Jessica Roach Confession
By Brad Witter
Get Even More From Bustle — Sign Up For The Newsletter