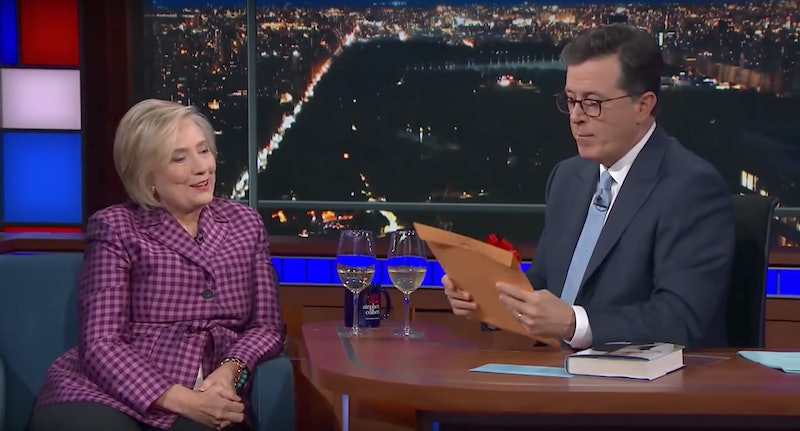 The Late Show with Stephen Colbert/CBS
By Sarah Friedmann
Sep. 20, 2017

On Tuesday evening, Hillary Clinton appeared on The Late Show with Stephen Colbert to discuss her new book about the 2016 presidential election, What Happened. During the interview, Colbert asked the former presidential candidate about Russian President Vladimir Putin and Clinton mocked Putin's reported manspreading habit, something in which he seemingly frequently engaged while in her company.

The conversation about Putin's manspreading habits arose when Colbert asked Clinton if she believed that Russia's reported interference in the 2016 presidential election was personal, as Colbert indicated that "part of the speculation is that he doesn't like you [Clinton]." Clinton responded that she believes Putin's seeming animosity toward her resulted from the role she played as Secretary of State in terms of seeking to perpetuate American values.

The former Secretary of State also noted that the fact that she's a woman "does seem to get him [Putin] a bit agitated." Clinton then described how Putin would "demonstrate" this agitation by manspreading (for those who are not familiar, the act of widely spreading one's legs and taking up as much space as possible) during his meetings with her. Clinton noted that this behavior was reportedly quite frequent, saying "every time I met with him, it would be [Clinton widely opened her arms to mimic manspreading] ... ok... the whole deal."

Clinton then went on to tell an amusing story of how, as Secretary of State, she was always looking for topics on which to engage with Putin, since he was reportedly perpetually uninterested in issues that she wanted to discuss (like the economy and human rights). However, Clinton did find that wildlife conservation struck a chord with Putin, describing how he once took her to a private sanctum in Russia where he showed her his plans for tagging polar bears throughout the country. Putin then asked Clinton if her husband, former President Bill Clinton, would like to join him in the activity and she wittily responded “Well you know I’ll ask him, but if he’s busy, I’ll go.”

Colbert and Clinton then further tackled the issue of Russian interference in the U.S. election, with the host asking Clinton about her recent comments on NPR — where she indicated that if there was proven collusion between the Trump campaign and Russia during the 2016 presidential election, there would be grounds to question legitimacy of the election.

Colbert asked Clinton what exactly her comments meant, saying "But what then? There is no constitutional mechanism to question the election. Elections are messy. This is just what happened."

Clinton agreed, saying "no one is talking about contesting the election, including me, because there is no mechanism." However, Clinton noted that she believes the Trump administration's legitimacy (or lack thereof) is steeped in what information comes out of the current investigations into alleged collusion with Russia. Clinton then suggested that, once the results of these investigations come out, Americans respond to any questions about legitimacy at the ballot box, saying,

"What you do is mobilize politically to express your will and your rejection of that kind of Russian involvement and coordination at the ballot box. I mean, that is where we settle our political differences. And that's where it should be."

Clinton and Colbert then continued up their conversation by discussing Trump's speech on Tuesday at the United Nations, in which the president rallied against various regimes with bellicose rhetoric. Clinton referred the speech as "very dark, dangerous — not the kind of message that the leader of greatest nation in the world should be delivering."

Clinton wrapped up her interview with Colbert by sharing a glass of chardonnay with the late night host, as she had described in her book how the drink, in addition, of course, to other things, had helped her get through the post-election period.

Overall, Clinton's interview offered amusing, yet serious, insight into her thoughts about Trump and Putin — from topics like manspreading to election interference and beyond.