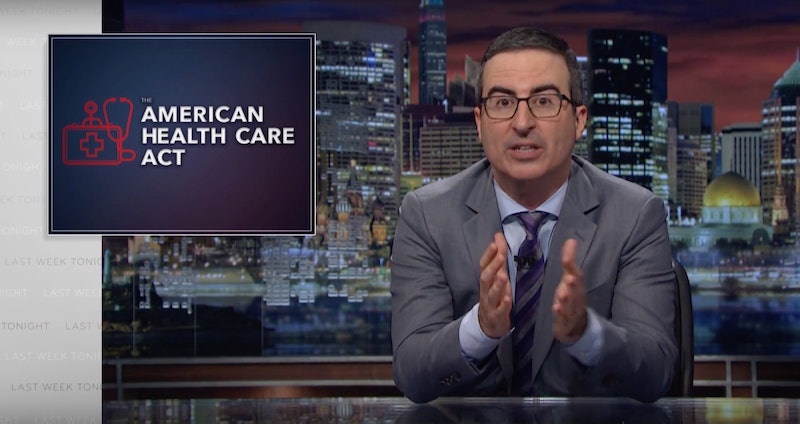 On Sunday's episode of Last Week Tonight, host John Oliver revealed Trumpcare's ironic twist: in financial terms, the Americans who will be most negatively affected by the GOP's American Health Care Act (AHCA) are those who likely voted for Donald Trump for president by an enormous margin.

Oliver dedicated much of his show to discussing the issues with the American Health Care Act, particularly noting that the plan will likely cause healthcare costs to rise significantly for lower income Americans while resulting in massive tax cuts for wealthy Americans. In noting this unfortunate disparity, Oliver also pointed out the incredibly ironic notion that Americans who will be hit with the largest financial burden from the AHCA (i.e. those individuals who will receive at least $5,000 less in tax credits for healthcare costs) are those who voted Trump into the presidency by a margin of 59 percent to 36 percent. Oliver characterized this notion as "frustrating," saying it was "as like the people of Pompeii voted for the volcano."

The statistics cited in Oliver's segment come from a recent Upshot analysis from the New York Times, which examined how much money individuals stood to lose or gain in health insurance tax credits compared with how they voted in the 2016 presidential election. In addition to the statistic cited by Oliver, the Times' analysis revealed even more ironic findings about how the AHCA will affect Trump supporters.

According to a Los Angeles Times report, the New York Times' analysis shows that in "In nearly 1,500 counties nationwide, a [60-year-old with an average income of 30,000] stands to lose more than $6,000 a year in federal insurance subsidies. Ninety percent of those counties backed Trump ... " Furthermore, the study also revealed that 68 of the 70 counties where Americans would suffer the largest financial loses in regards to healthcare supported Trump in the presidential election.

Overall, social media users, the Times' analysis, and most recently, John Oliver via Last Week Tonight, have all in their own way illustrated a very unfortunately ironic point: that those who supported Donald Trump and his campaign promises of a "better" Obamacare alternative are likely going to be the people who lose the most if the AHCA is passed, both in terms of finances and well-being. Hopefully Trump will pay attention to these reports, as well as Oliver's promised "informercial" describing how the AHCA will hurt rural, low-income Americans, and will back away from supporting the proposed law, particularly since it alienates many of his most ardent supporters.

More like this
'Bridgerton' & 'Succession' Casts Join Forces For A New Dickens Adaptation
By Darshita Goyal
'Waterloo Road' Is Back, With More Than A Few Familiar Faces
By Sam Ramsden and Vivian Iroanya
Prince William Condemns “Unacceptable” Comments Made To A Black Guest At Buckingham Palace
By Shahed Ezaydi
In Pop Culture, Female Journalists Are Finally The Main Character
By Jenny Singer
Get Even More From Bustle — Sign Up For The Newsletter