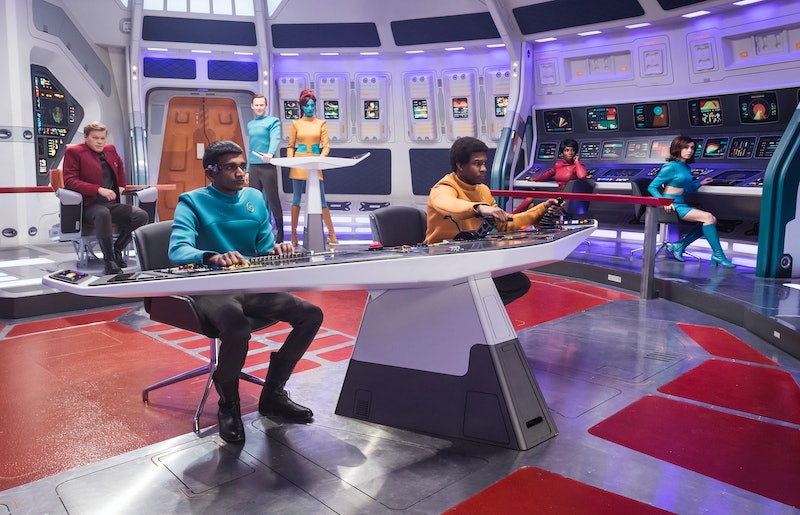 Everyone watches Black Mirror in their own way. Maybe you meticulously watched all three seasons straight through in order. Or maybe you prefer to skip around, jumping right to the episodes starring Jon Hamm, Haley Atwell, or your favorite Downton Abbey actors. Maybe you watch with Wikipedia open to spoil the frightening ending. The choice is yours. In an interview with Bustle, Black Mirror creator Charlie Brooker and executive producer Annabel Jones debated watching Black Mirror Season 4 in order versus skipping around.

The new season, which debuts Dec. 29 on Netflix, is the second season to air exclusively on the streaming platform. And that brings with it some interesting wrinkles in how viewers consume the show. "It's irrelevant [what season it is]," Brooker says, "because you can watch them in any order. That's what we encourage!" Jones, however, thinks there's merit to watching them in a certain order. "There's a reason behind the sequencing," she says. "Not a strict rule, but..."

There is some method to the madness, Brooker admits. "It's like compiling a playlist," he says. "Isn't it? It's like compiling an album." The only connecting element in the series, really, is the element of surprise. You have no idea how an episode is going to end once you press play.

"For Season 3," Brooker says, "because that was going to be a lot of people's first encounter with the show [on Netflix], it was important that we started with something very accessible. We started with 'Nosedive.' Then we had 'Playtest' afterwards, which had a very different tone, more a sort of horror romp. That was useful because we wanted people to get that this show was unpredictable and different each time."

This time around, more Netflix viewers know what they're getting into, but choosing the order that will appear on the streaming service is still an agonizing debate. "I can never decide," Brooker says.

So what goes into choosing the anthology series' episode order? "I think you want to avoid any sort of 'samey' thing," Jones says. "You don't want all your nihilistic bleak ones together." For a show that thrives on being bleak, even that would be pretty cruel.

"I did think, at one point, how many people will want to watch extremely bleak nihilistic stuff?" Brooker adds. "But we have got some of that because we wouldn't be Black Mirror if we didn't."

Now that you know the official Netflix order, above, here is a suggested alternative sequence for Black Mirror Season 4.

Let's be real. We all want to start with the Star Trek episode. But with a show like this, delayed gratification may be the better way to go. This episode is "sort of more playful," Brooker says, about "dating and the romantic world." To hark back to the SATs pre-2006 and use an analogy, "Hang The DJ" is to Tinder what "Nosedive" is to Instagram and Uber.

Next, go for something a little scarier. This one is "a noir thriller" shot in Iceland, according to Brooker.

Next, you'll probably want to see some familiar faces and to be a little less overtly horrified. "Arkangel" is directed by Jodie Foster and stars Rosemarie DeWitt as a mother who goes to great lengths to protect her daughter using technology.

"It's got the feel of an indie movie," Brooker says. "A coming of age drama. It's a sort of blue collar version of the near future."

If this season is like an album, Brooker says that "Metalhead" is its "punk single." "It's a very short, paired-back episode," he adds. So you could justify watching this episode first, by that logic, but any good single's proper place is in the middle.

You made it! This episode, as you may have guessed, is "a space epic," according to Brooker. "Or a Black Mirror take on a space epic." Trust us, it's worth the wait.

The last episode Brooker mentions is a "treehouse of horror," with several stories in one "like Russian dolls." It is a finale in many ways. It's long. There are Easter Eggs referencing previous episodes, and the many stories (and its longer runtime) make it a good way to cap off the season.

But although Brooker has selected an order for his episodes and we've done the same, there's no right or wrong way to watch the show, and Brooker is pretty agnostic about how you choose to watch.

"I would encourage people to look at the episode list and click on the one that interests them most in a knee-jerk way," Booker says. "Or get your friend [who's seen it] to tell you. A lot of people do that."

There's one interesting difference that Brooker has noticed in terms of how British and American audiences watch the show. Anecdotally, Brooker says, "A lot of Americans say 'don't watch the pig one first,'" even though that's technically the series premiere. So, whether there's a particular actor you want to see or a particular story that speaks to you (or seems too scary to delve into at a particular time of day), you're in control here. And that's more than we can say for many of the characters in Black Mirror.

More like this
UK Viewers Will Have To Wait To Watch The Handmaid’s Tale S5
By Maxine Harrison
The Ultimate Guide To 'DWTS' Season 31’s Move To Streaming On Disney+
By Brad Witter
The ‘Emily In Paris’ Season 3 Release Date Is Here, Plus The First Footage
By Bustle Staff
The ‘You’ Season 4 First Look Shows Joe’s New Identity And Potential Victims
By Bustle Editors
Get Even More From Bustle — Sign Up For The Newsletter