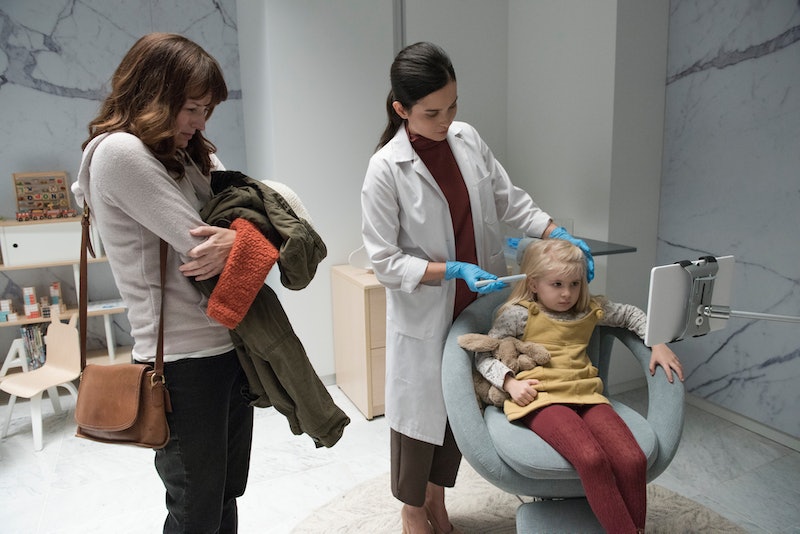 Black Mirror, Netflix's popular sci-fi dystopian anthology series that makes you want to shatter your iPhone on a daily basis, is going to take on parenting this season, and Jodie Foster was the perfect person to helm this unique chapter in Black Mirror Season 4. "Arkangel" follows a mother (Rosemarie Dewitt) and her daughter Sara (Brenna Harding) over a handful of years as the daughter grows up. Of course, technology comes into play in a dark and sinister way — because what else would you expect from Black Mirror?

But the benefit of being part of an anthology series is that the tone of "Arkangel" can differ drastically from that of the rest of the series. Instead of a satirical or dark sci-fi short story, this chapter of Black Mirror, which premieres December 29 on Netflix, plays like an indie movie or even a coming-of-age story, chronicling the complicated relationship between a single mother and her daughter as she grows up. The episode, set in a near-future America hit by hard times, begins when Sara is a toddler, and follows her through her teenage years, hitting some major life milestones along the way. While we won't give away exactly how technology and parenting intersect in this episode and the results of that intersection, we can reveal that "Arkangel" deals with a "sophisticated surveillance tool" that brings new meaning (and danger) to the term helicopter parent.

Foster, who directed the episode, was fascinated by the smaller scope of the story and says she felt a deep personal connection to the mother-daughter dynamic portrayed by Dewitt and Harding.

"I grew up with a single mom and by that time my brothers and sisters were all much older, so it was really just she and I," Foster tells Bustle one early October morning at the Four Seasons hotel in Beverly Hills. "[My mother] really is the most significant relationship in my life. It was really beautiful and I have so much respect for her and we've been through so much together."

Of course, Foster is the first to admit her relationship with her mother wasn't picture perfect. "It was also a struggle. It was really tough," she says. "That process of individuation was foundational for me but also really hard. Every other relationship in my life is colored by that. So that's something I was really interested in exploring — it's like it was bubbling in my body and needed to get out. It was amazing that [Black Mirror creator Charlie Brooker] handed it over to me and said, 'How about this?'"

When it came time to draw on her own experiences to direct this episode of Black Mirror, Foster easily related to both the mother and the daughter because of how her own mother instilled her with a great sense of fear.

"That was [my mom's] greatest gift to me, to tell me what I should be afraid of," she says. "There's a cost to that, of continually bringing fear into a relationship with your child. It's so telling where she came from and what her problems were and what her issues were, her feelings about herself. She raised me to be this incredibly strong person, and then we tried to break my knees off with a baseball bat so that I wouldn't be so strong that I would walk away from her."

The award-winning actor and producer is still shocked she was able to create a quieter, more emotional drama that she deeply related to within the world of Black Mirror. "We all pass on whatever neuroses we have to our children and I find the subtlety of that very fascinating," she says. "The fact that there is a place for that in Black Mirror, a Bergman kind of film, is amazing to me."

The fact that "Arkangel" differs significantly in tone from what Black Mirror fans may be expecting was Foster's goal from the start. "Honestly, whenever I meet any of the other directors from Black Mirror, it's completely intimidating," she says with a laugh. "I'm like, 'Theirs is going to be better, or more CGI, they're going to have planes and things, and monsters!' But that wasn't my ambition with this. The whole reason why I'm an actor and why I continue making films is that I'm so in love with honesty between people and there's not a lot of that in features these days, so to be able to explore that is awesome."

She pauses to laugh before adding ruefully, "I just hope they bring me on to another Black Mirror so I can show that I can do other things."

Despite not having any wild CGI or alt-world scenarios, "Arkangel" does employ a new kind of technology that it's completely plausible could exist a handful of years from now. "Or five minutes," Foster warns. "We had asked that question: Where would America be in this particular Black Mirror, in 10 years from now? Instead of believing there would be flying automobiles, I really had this idea that we would be struggling. This is a place where jobs had left these towns a long time ago and where nobody had anything to do and a lot of the people just don't feel successful. They feel like they failed. That was what I was looking for."

"I find myself making movies sometimes that, in terms of the science, predicts the future, where we're headed," Foster says. "But that's what science fiction does. Science fiction is a mirror for our psychology at the moment and where our psychology is headed. [Showrunner] Charlie [Brooker] loves technology, but he also recognizes that we have created something that we can't control its progression. It isn't the technology that is evil or morally problematic, it's our own psyches that are filled with such damage that it exacerbates a hundred fold what our own psychological problems are."

And as technology grows exponentially, Black Mirror will be there to warn us all of the dangers it poses. While Season 3's "San Junipero" offered an uplifting ending, Foster warns that's the exception to the rule. "I don't know that there are going to be too many uplifting endings of Black Mirror," she says with a laugh. "'San Junipero' might be the only one, actually." So have your mother on speed dial for when you watch this episode, because it's hardly a shock that "Arkangel" will definitely leave you gutted.