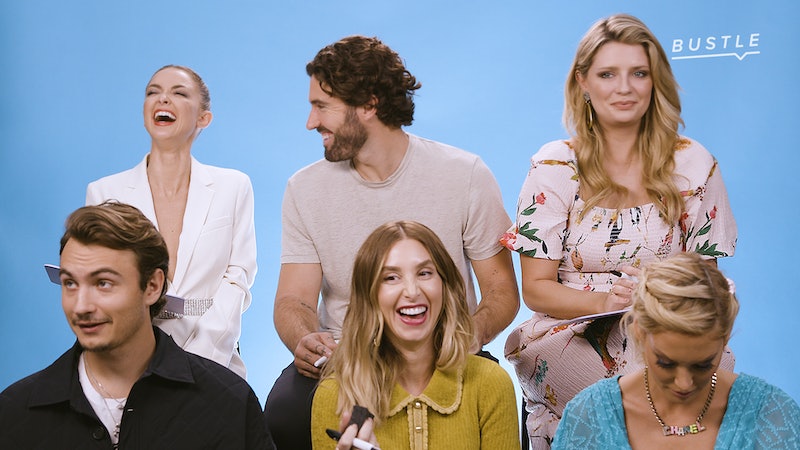 The Hills: New Beginnings may mark a new chapter for the show's original stars, but they're still happy to look back at all the drama, friendships, and tears that got them to where they are. And while there was a lot to love about the O.G. series, perhaps what's most remembered are all of the iconic Hills quotes the cast gifted us throughout the years. Now almost a decade later, though, does the cast of The Hills: New Beginnings actually remember who said what?

During a visit to Bustle's New York offices earlier this month, Hills alums Brody Jenner, Stephanie Pratt, and Whitney Port joined together with new additions Mischa Barton, Brandon Thomas Lee, and Brody's wife, Kaitlynn Carter Jenner, to put their memories to the test. Considering they actually lived it, Jenner, Pratt, and Port definitely had an advantage, especially since 23-year-old Lee — the son of Pamela Anderson and Motley Crüe drummer Tommy Lee — would've been too young to watch The Hills when it first aired. And frankly, it doesn't seem like Barton — whose own 2000s show The O.C. inspired Hills predecessor Laguna Beach — ever watched either. She admitted she was just guessing for the whole game.

However, it ended up being a fairly even playing field. Almost everyone assumed Jenner had said "all girls are shady," but it was actually Lauren Conrad's old flame Doug Reinhardt, who Pratt went on a couple dates with after he and LC briefly rekindled, then quickly extinguished, their high school romance. Jenner was the only one who answered right, but he at one point spelled Lauren's name wrong (Loren?? really??), so he didn't exactly nail the competition.

Of course, everyone (except for Barton) remembered LC saying, "Homeboy wore combat boots to the beach. I know you don't want to call that your boyfriend." This is one of the most repeated lines from the show, and for good reason: it sums up Audrina Patridge's ex Justin Bobby, who's also returning for New Beginnings, pretty perfectly. And it was also just outright funny.

Elsewhere in the video, everyone correctly attributed, "He's a good looking guy, but looks can only get you so far" to Port, since she was always the wise, grounded one giving out good advice. And Pratt revealed a behind-the-scenes secret: during she and Heidi's confrontation with Stacie the bartender, Heidi had warned Stacie and her pal Scheana Marie (yes, from Vanderpump Rules) that she was going to have be mean to them on-camera, but told Stephanie that Stacie was actually try to split her and Spencer up. So Stephanie's reaction was real, and she said she was still kinda "pissed" about being tricked. Maybe she'll bring it up on New Beginnings?

It's hard to outdo the original Hills, but the New Beginnings cast will surely have their own quotable one-liners to dish out. There's always drama with this group, and even though things might look a little different nowadays, that's one thing that probably won't ever change.