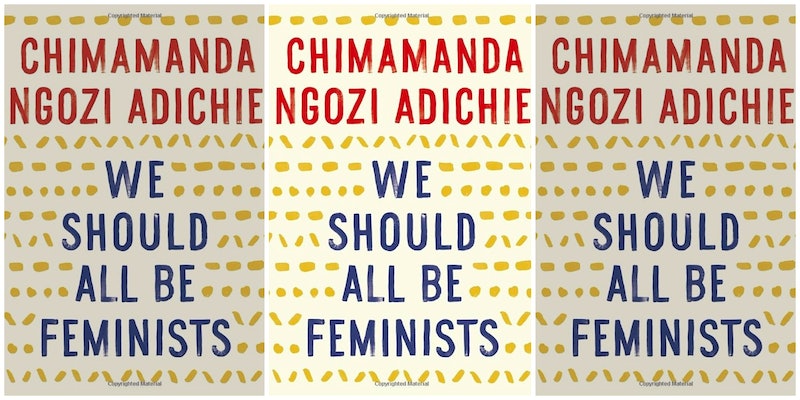 This isn't the first time someone has attempted a wide distribution for the Nigerian feminist's manifesta. Beyoncé sampled audio from Adichie's 2012 TEDx Talk — on which We Should All Be Feminists is based — for her hit single, "***Flawless." In 2015, the Swedish Women's Lobby announced plans to hand out copies of We Should All Be Feminists to every 16-year-old in the country, along with discussion guides for educators.

In its January newsletter, Broadway Books "Co-Bookbroads" Kim Bissell and Sally McPherson say that they "want to kick off the new year by celebrating the power of women to do great things," adding:

We chose Inauguration Day for this giveaway because when we inaugurate a new president and bring in a new administration it's a time of new beginnings and new challenges, a chance to reflect on where we are as a country, where we want to go, and how we want to get there. We found the words of this international voice to be particularly inspiring and wanted to share them with our customers.

For more information on how you can get a free copy of We Should All Be Feminists on Inauguration Day, visit the Broadway Books website and follow @Bookbroads on Twitter!

More like this
We’ve All Had Bad Sex. Nona Willis Aronowitz Is Talking About It.
By Sophia Benoit
Josh Peck Shows Love To Jennette McCurdy After Her Shocking 'iCarly' Revelations
By Radhika Menon
Emma Mackey *Is* Emily Brontë In The First Trailer Of The Biopic
By L'Oréal Blackett and Sam Ramsden
Jennette McCurdy’s First Kiss On 'iCarly' Didn’t Go As Planned
By Bustle Editors
Get Even More From Bustle — Sign Up For The Newsletter