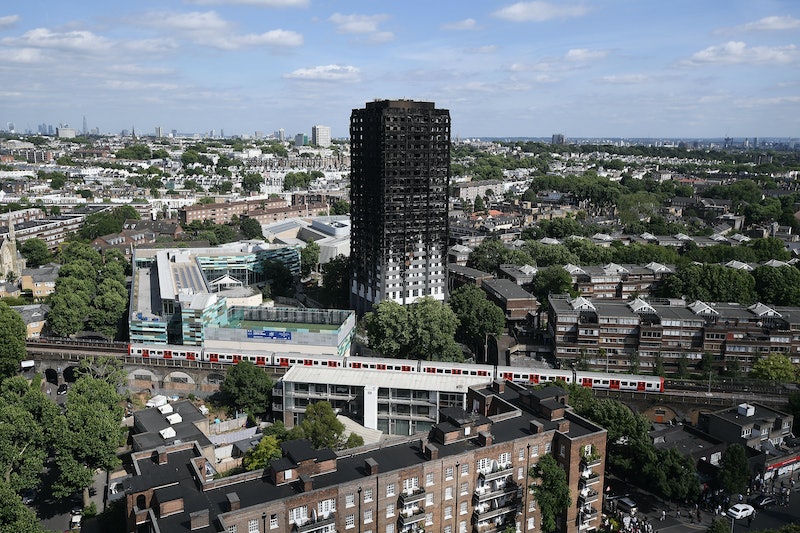 In a tasteless and horribly offensive move, people are taking selfies at Grenfell Tower — you know, that building that caught fire last week, killing 79 people (and counting), devastating London, and leaving a scar on families for the rest of their lives. But sure, stop and take a photo real quick. In case you're wondering, it wasn't one random person who walked by and snapped a selfie; the problem has grown big enough that residents have put up signs near the site politely asking people not to take selfies, since that's apparently not common sense.

It's not exactly front-page news that we're obsessed with taking selfies. One survey of 2,000 women conducted by the beauty site FeelUnique found that women spend around five hours a week taking pictures of themselves. In 2015 alone, we uploaded over 24 billion selfies to Google. Perhaps unsurprisingly, studies have found that our motives behind taking selfies are narcissistic and self-indulgent, leading to the question of the day: Why on Earth would you ever take a selfie at the site of a tragedy? This isn't Disneyland. Are you trying to tell your followers "Hey, look how amazing I look standing in front of this destroyed building"? The location of dozens of horrible deaths is not social media fodder.

We're so engrossed in selfies that it was reported in September of 2015 that more people die worldwide from selfies than shark attacks — falling from heights, drowning, being hit by trains, getting in car crashes, etc.

Grenfell Tower isn't the only grossly inappropriate place people take selfies. Selfies at funerals have become a growing concern. A 2015 study from the UK found that one-third of mourners admitted to taking a selfie at a funeral. While 17 percent of these people said they did it to honor the deceased, a whopping 36 percent of them admitted to doing it to solicit sympathy.

Selfies at the Holocaust Memorial in Berlin have been another issue. Artist Shahak Shapira very cleverly pinpointed how utterly inappropriate this is with the website Yolocaust, where he contrasts photos of people taking ridiculous pictures with the horror and disgust of the concentration camps. The images are quite startling, but very necessary: there is nothing funny, silly, or entertaining about a place that was the site of so much evil and death. And yet people use it as the "perfect" backdrop for a stream of thoughtless selfies. The issue at Grenfell might not be identical, but it's similar enough.

It really emphasizes just how disrespectful and insensitive it is to turn tragedies in selfies. When you take a ridiculous selfie like this (seriously? Yoga? Juggling?) at the place that will be known throughout history because of the people who died there, you're reducing what really happened, diminishing it until it's nothing but a post on your Instagram page. This isn't about you, so don't try to make it that way. It's a slap in the face to the people who lost their lives there, as well as their loved ones. Selfies don't have to be bad, people — most of us love to take them; but there's a time and a place. Seriously. Put your phones away.