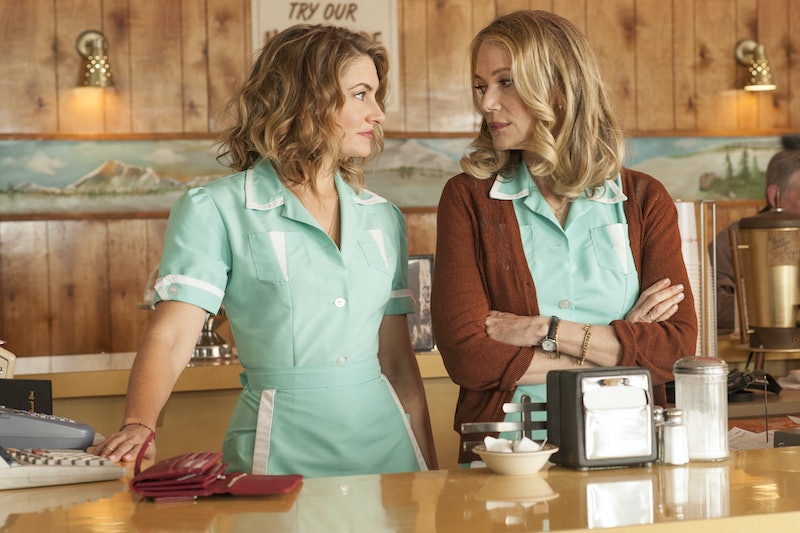 Bad boys are a powerful force on Twin Peaks: The Return, just as they were in the original Twin Peaks. This time around, yet another bad boy is involved with a Johnson woman and it mean that history is repeating itself (read: trouble). In "Part 5" of Twin Peaks: The Return, fans meet Shelly's daughter, Becky, whose bad life choices echo the ones her mom made with Leo Johnson and Bobby Briggs back in the day. The introduction of Becky and the clear parallels to her mother's storyline 25 years ago brings up a lot of questions around Shelly's life as (most likely) a single mom, including the very curious question about who Becky's father may be and, urgently, how Becky got involved with Steven.

Twin Peaks: The Return introduces us to Becky by way of Steven at first. It becomes clear very quickly that Steven's a true deadbeat in his first scene. Steven is called into the office of an older professional proceeds to ream Steven out for wasting his time applying for a job at the company. Citing a poorly constructed resumé and half-filled out forms, the interviewer screams Steven out of his office, telling him he won't interview him and to get his act together.

The next time we see him, he's waiting in the car outside the Double R Diner, where Shelly and Norma still work and probably have worked for the past 25 years. Becky rolls into the Double R and immediately starts talking to Shelly. Viewers watch this conversation take place at a distance, from Norma's point of view, who is sitting in a booth at the back of the diner doing the bills. Only Becky's murmurs can be heard but it's clear she needs money and that she can't keep going on the way she's been going. The exact circumstances around what's giving her grief are a bit unclear, but it's clearly linked to Steven, who we soon find out is her boyfriend.

Shelly gives Becky money, and Becky leaves. She hops into Steven's car, where he promises to pay her back and offers to take her out to dinner. He's weirdly holding onto the back of her more tightly than is comfortable, which feels like an ominous sign. As they sit in the car and talk, Norma tells Shelly that this is the third time in two weeks that Becky's asked for money. Shelly, clearly distressed, acknowledges the situation but mentions the virtue of supporting a loved one. This is most likely a reference to how Shelly and Norma supported one another through their respective rocky marriages all those years ago.

Steven pulls the car out of the lot and backs into a more secluded spot. There, he promises to take Becky out to dinner again, detailing how well he's going to treat and compliment her. She's unamused at first, clearly miffed that she has to ask her mom for money to support both her and Steven rather than Steven being able to find work. He manages to soften her up by offering her a bump of cocaine, which she readily does. As she sinks into a drug-induced happiness, it becomes clear that the very real problems in her relationship to Steven are melting away easily.

It will be interesting to see how the Twin Peaks revival utilizes Becky. For me, it's no coincidence that she is making some of the same poor decisions that her mother made when it comes to men and also, that she is casually using heavy drugs, which was a favorite activity of teen Laura Palmer before she was murdered. The connection to drugs would prove to be an even more ominous a connection if Bobby or Leo turned out to be her father, respectively, considering their drug-dealing pasts. Becky's predilection for hard drugs might run in the family, but that would mean even more trouble lies ahead for her, as it did for Bobby, Leo, and Shelly in the past.

Having Becky repeat some of these bad habits makes you wonder whether she isn't being set up for some bigger narrative. For now, the mystery of Becky's father and the outcome of her toxic relationship with Steven will have to wait until another episode. For now, all there is to do is ponder and hope that history is not repeating itself for Shelly and Becky Johnson.