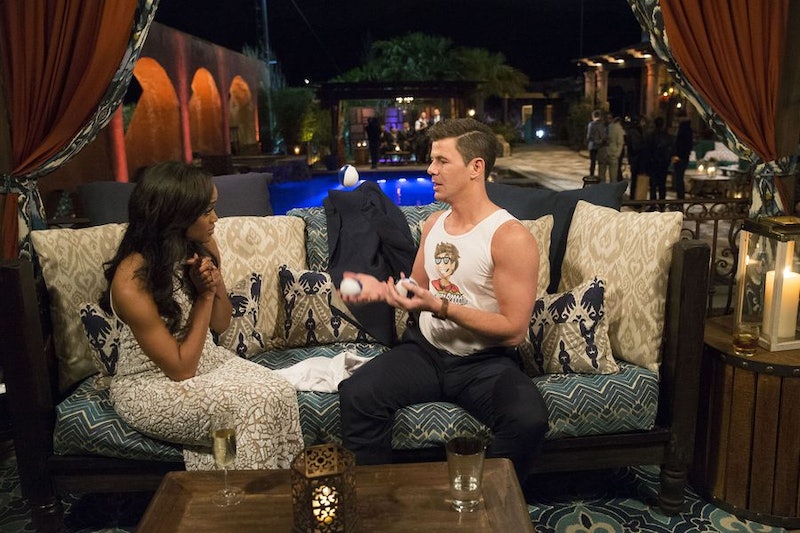 Most Bachelorette fans live for when the show brings the drama, but on this week's episode, that drama had basically nothing to do with Rachel Lindsay. On Monday night, Lucas "Whaboom" Yancey and Blake Elarbee both got sent home during the rose ceremony, and proceeded to have a rather theatrical fight outside the Bach mansion during the exit interviews. It got a little ugly, and if you're wondering, it still isn't over. Whaboom opened up about his time on The Bachelorette during an appearance on Live With Jimmy Kimmel, and he's still not willing to make nice.

He video called into Kimmel to talk about his accusations against Blake — you know, Lucas' story about how he caught Blake standing over his bed at night, eating a banana and watching him sleep. And while he was willing to admit that the banana thing was actually just a "bad dream", he will not let go of blaming Blake for Rachel sending him home.

Nah, it couldn't have been the banana story, or the fact that they didn't have chemistry together, or even that weird "whaboom" noise he kept making. It had to have been Blake making him look bad, right?

"I think it was Blake's fault that I got eliminated," he said, and even though he seemed to have more to say on the topic, Kimmel changed the subject, so now, we'll never know.

As funny as their (obviously staged) fight was on their way out, it seems like this fight between Blake and Lucas didn't end with The Bachelorette, which actually makes sense, since it started long before the show began. Being that there was serious drama between them thanks to the last reality dating show they were on together — Ex-Isle in 2016 — it was practically a given that it would continue here.

The good news? As strange as he is, this interview really makes Whaboom seem like a pretty nice guy... even if he spent half of it making loud noises and impersonating Jim Carrey. The bottom line here seems to be that Lucas just genuinely enjoys the spotlight and isn't afraid of looking silly to get attention, which can be a little endearing.

Maybe Whaboom is more than a man. Maybe he's a metaphor for all of us out there who just want to love and be loved in return.

Or maybe he's just a fame hungry dude who yells "whaboom" a lot.