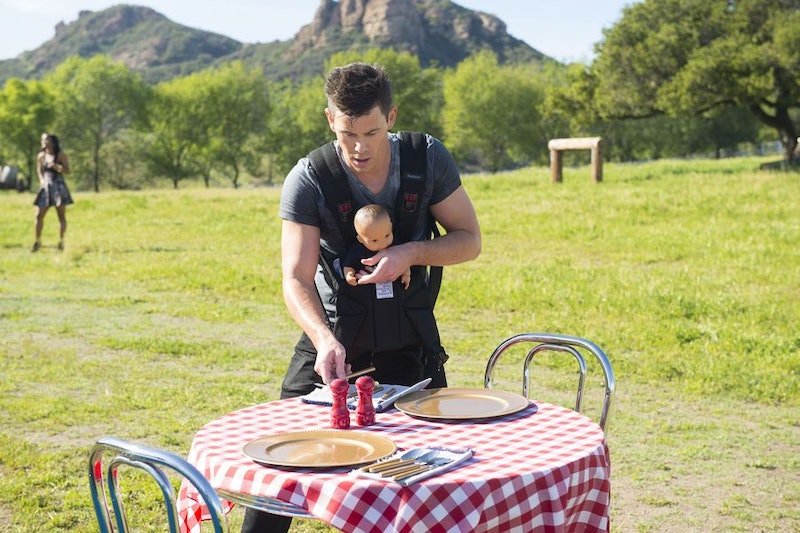 Let's get this out in the open: I have no idea how Whaboom made it past the first rose ceremony on The Bachelorette, but here we are in Week 2 and he's still standing. And on Monday night's episode, he brought more surprises when he managed to win the first group date challenge of the season... and it made absolutely no sense. It wasn't just any challenge, either — Whaboom won The Bachelorette's husband material challenge, but it doesn't actually mean anything about the kind of partner he'd make in real life.

The whole thing was kind of ridiculous. It was like a weird relay race littered with tasks that "good husbands" are supposed to excel at, like holding a baby and vacuuming at the same time and getting dinner on the table, with celebrity guests Mila Kunis and Ashton Kutcher cheering on the sidelines, because this is The Bachelorette, after all. Even though the challenge was mildly offensive, it was even more offensive that Lucas was dubbed the winner... especially since he celebrated his victory by literally spiking his baby doll on the ground.

You don't have to be husband material to know that you probably shouldn't do that with a real baby, regardless of the volume your "whaboom" carries at the time.

As an actual married person, I can say that this challenge is not at all like real married life, and it's also not a measure of what a good husband would be. There's never one person taking over the domestic tasks; it's always a tradeoff to keep a household running smoothly. I hate vacuuming, so my husband is the one who does that, and he hates emptying the dishwasher, so that's all me. And fortunately, neither of us is ever on a timer during chores.

Sadly, Lucas' win did nothing to prove his husband potential and actually kind of made him look even more obnoxious than he already did — if that's possible. But still, Rachel treated him with kindness and grace like an actual angel, even though I am now 100 percent more convinced that he's the worst.

From what I know about Rachel so far, it doesn't seem like Lucas is the guy she's looking to spend the rest of her life with at all — especially if he really is who he seems to be on The Bachelorette. Like all women, Rachel deserves a partner who does not throw her infant on the ground. Is that too much to ask?