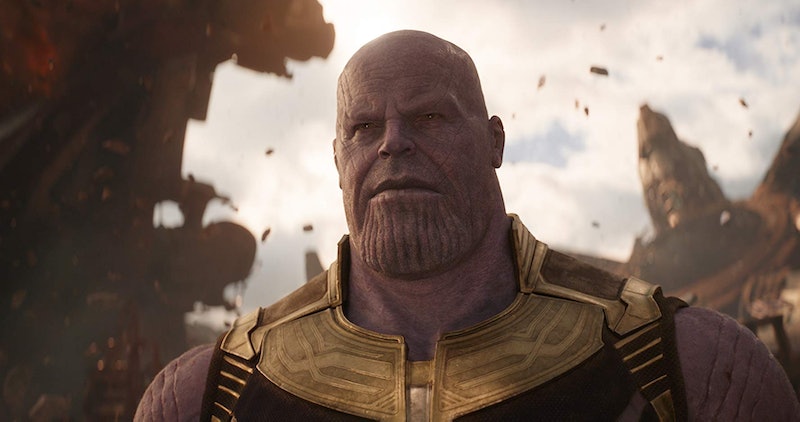 Thanos is clearly not an ordinary being. And while his face bears semblance to actor Josh Brolin — the way he talks, his general physique and his bipedal nature make him resemble a human — he's also got purple skin, incredible strength, a gigantic hulking figure, and then of course there's that weird-looking chin. Clearly Thanos is some type of alien in the the Marvel universe, but which one exactly?

As we all learned from Avengers: Infinity War, the cosmic-level super villain hails from the planet Titan, which is Saturn's moon and the location where we last saw Iron Man (Robert Downey Jr.) and Nebula, and where Peter Quill/ Star-Lord (Chris Pratt), Drax, Mantis, Doctor Strange, and Spider-Man all vanished into dust. According to the Marvel Cinematic Universe Fandom database, he is part of the Titan species, an alien race of powerful, god-like beings that evolved on the planet. Infinity War goes over a bit of his background story, and talks about how he was responsible for making his own planet inhabitable after wanting to impose his nihilist ideals on the overpopulated planet. In the end, he drove his own people to extinction.

The graphic novels go into a much more detailed dive into the Mad Titan's past. Thanos isn't just from Titan, he's one of the Eternals, which is a race of super-powered beings that originated from a caste of humans which were genetically enhanced by the Celestials — an ancient race of beings that existed long before the existence of galactic communities, even before the existence of the Asgardians.

This explains a lot about why Thanos still resembles human beings. And if the Celestials sound familiar, it's because that's the alien race of Peter Quill's father Ego (Kurt Russell), and therefore also half of Quill's own genetic makeup. As we've seen in Guardians of the Galaxy Vol. 2, they possess the ability to manipulate matter and energy. (Maybe, despite his disintegration, Quill's going to play a key part in defeating Thanos?)

But along with the Eternals, the Celestials also created a companion race called Deviants. Deviants are considered to be "hideous and warlike." And though Thanos was born from two Eternals — his father A'lars, the Mentor and leader of their colony, and his mother Sui-San — he possesses a Deviant gene, the mutant equivalent of the X-chromosome. This explains his purple skin, the strange lines on his body, and his chin. And because of this, he was also considered a mutant amongst his own people.

The comic book explanation of Thanos's identity also explains a lot about the way he acts, and his nihilistic perspective. The Mad Titan's main villainous motive in the comics revolve around his romantic feelings for the physical manifestation of the cosmic entity of Death. In the original Infinity Gauntlet storyline, he wipes out half the universe in an attempt to actually impress Death.

Obviously, though, MCU Thanos didn't try to woo Death in Infinity War. The films aren't exactly known follow the comics to a T, and therefore don't (and can't, given the limited running time) explain as much as the comics do about Thanos. But knowing all this about his alien origins does reveal a lot about the seemingly undefeatable being, and might just be important in knowing how to take him down in Endgame. Let's hope the remaining Avengers have figured this all out.