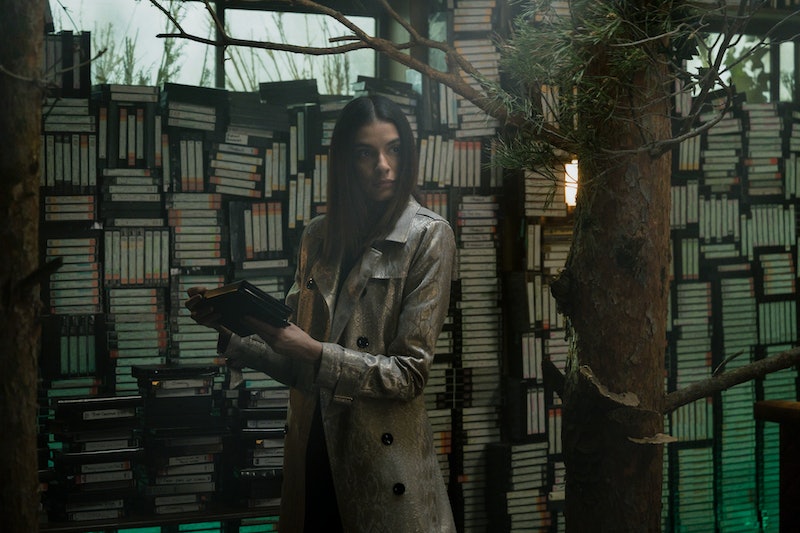 Spoilers ahead for Locke & Key Season 1. One of the central characters in Locke & Key is Keyhouse Manor itself, the ancestral home of the Locke family where magical keys and doors abound. The show is just as much about figuring out what all the keys do as it is about trying to keep said keys out of the hands of Dodge. And considering Season 1 ends with the Locke kids' demon foe (unknowingly) still alive, it's more important than ever that they figure out how to use the keys — and ideally, find some more.

The show doesn't delve much into the keys' history, but in the Locke & Key: Clockworks comic, it's explained that the keys were crafted by Benjamin Locke during the Revolutionary War. The keys are made out of "Whispering Iron," a metallic substance that the demons turn into if they pass through the Black Door (the Omega Key door) but do not immediately possess a human host.

In total, there are over 30 keys introduced in the comics, each with their own unique ability. In an interview with Syfy, Locke & Key comics writer Joe Hill said that "the show and the comic are almost like a DNA helix" and that the Netflix series is a "gateway to a larger story." This means that fans of the comics can expect the show to introduce both keys they're familiar with and ones exclusive to the show. Here's a breakdown of the ones we've seen so far.

Though it's not mentioned much, the Echo Key is really the key that sets everything into motion, as it's the Echo of Dodge that convinces Sam Lesser to shoot Rendell Locke three months before the start of the show. In Episode 9, Ellie tells the Locke kids that her boyfriend Lucas was possessed by Dodge after Rendell opened the Black Door in the '80s, and after the possessed Lucas murdered two of their friends, Rendell was forced to kill him.

Years later, Ellie is still heartbroken over Lucas, so she uses her Echo Key at the Wellhouse — the only place where the key works — to try and bring him back. Ellie believes the Echo Key allows you to summon an "echo" of a loved one by calling their name into the well, and hypothetically that's what it does. However, the "Lucas" who answers is still possessed by Dodge, who is assumedly trapped in this universe as long as the Black Door is closed. Ellie realizes too late that the undead Echoes are un-killable — normally not an issue if they're just confined to the Wellhouse, but a big problem after Dodge tricks Bode into giving them the Anywhere Key.

Given to Kinsey by Rendell in the form of a bracelet, the Anywhere Key allows Dodge to leave the Wellhouse without walking through the front gate, which would've caused them to dissolve.

The Anywhere Key is gold and has six interlocked rings. It allows a user to walk through a door anywhere in the world, as long as they've seen the front of it (in real life or through a picture) and as long as it has a key hole.

The Head Key is a powerful key that goes in the nape of the neck. It can be used on oneself or on others, and it allows the user to walk into the mind of whoever it's used on. Everyone's "mind palace" looks different, but its power lies in being able to review memories, and even remove memories (like Duncan's) or entire emotions (like Kinsey's fear). We even learn through Erin that it's possible to lock oneself in one's own mind.

When the key is used, a secondary copy of the person acting as a keyhole appears, so that person can act as a guide into their own mind. However, both their real body and the key are frozen and defenseless while this happens, making it a key that shouldn't be used solo.

Per Hill's Syfy interview, the Mirror Key is exclusive to the show. When plugged into a mirror, it shows an uncanny valley version of the user that beckons them into the mirror. If the person walks inside, they become trapped in "the prison of the self," a funhouse horror where it's impossible to see which way is the exit.

A very straightforward key that looks like a flame, the Matchstick Key sets anything it touches on fire. This is the key that Mark uses to die by suicide in the opening moments of the show, as Ellie reveals only Mark knew where all the hidden keys are in Keyhouse — implying there are many more that the Locke kids haven't found yet.

A modernized form of the Gender Key in the comics, this key is inserted into the user's chin, allowing them to change their physical appearance to anyone they wish. We find out in the final moments of Season 1 that Dodge uses this key to appear as the woman Dodge, teenage Lucas, and Kinsey's love interest Gabe.

We learn this is an ability pretty limited to just inanimate objects, as Nina tries to put Rendell's ashes in the cabinet and nothing happens.

This is a cute musical note-looking key that is actually pretty sinister. The Music Box Key only works with a certain music box, and once opened the user is able to order anyone to do anything they want. Kinsey uses this to prank Eden at school, but it's easy to see how being able to manipulate someone against their will can become a dangerous weapon — and there's a brief suggestion during that scene that the power itself becomes addicting the more it's used.

Though it's not confirmed what this key is actually called, it is unique to the show. It's shaped like a flower, and when the Locke kids use it on a tree, it unearths dozens of glowing jars, each containing one of Duncan Locke's missing childhood memories. It's not yet clear what the actual powers are, as we can assume not every tree has a bunch of buried memories around it. It's possible this is like the comics' Plant Key, which appeared once in Locke & Key: Keys to the Kingdom and allows a user to control vines and plants.

A key with a skull face, this is used in conjunction with the imposing Ghost Door. When unlocked, the user can walk through the door and become a ghost. The ghost can fly but cannot interact with living beings, making it most useful for gathering information. To return back to their body, the user needs to just walk back through the same door.

The catch, as we see with Sam Lesser, is that the body needs to be alive to return to. If the body is dead or destroyed, the user is doomed to forever remain as a ghost stuck on the Keyhouse grounds.

When inserted into the Crown of Shadows, this lets the wearer control an army of shadows. They're incapable of attacking in the light, but they can swarm endlessly and also appear as an all-black copy of the wearer, which is how Dodge tricks Bode.

This is perhaps the most important key, as it's the first one Benjamin Locke made in 1775. It opens the giant Black Door in the Drowning Caves, which is a portal to another universe filled with demons called The Children of Leng. It's not clear what else it can do other than just open that door, but it's of utmost importance that the Lockes keep it out of Dodge's hands — unless they want to fight an army of demons.