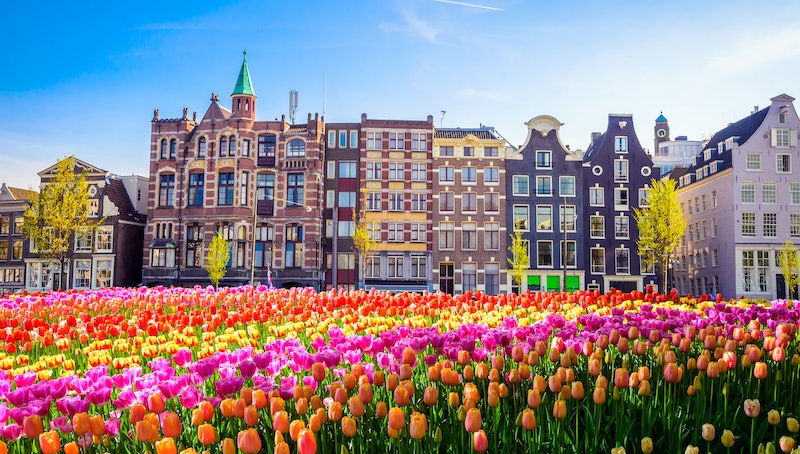 Over the last few years, many cities across the globe have instated tourist taxes for foreign travelers. These taxes are, primarily, created by local governments in an effort to keep up with maintaining cities that are at risk of succumbing to wear and tear from too many visitors — after all, some of the most popular attractions in the world don't have the structural, economical, or environmental foundation to sustain the amount of visitors they receive. Now, one city is increasing its rate after a growing influx of tourists: According to CNN, Amsterdam is raising its already existing tourist tax, bringing it to the highest charged in all of Europe.

Currently, Amsterdam charges a seven percent tax on the rate of rooms at hotels, motels, and bed & breakfasts alike. Now, the country plans to add about another $3 worth of tourist tax per occupant per night. And if you think you can avoid that price increase by opting for an Airbnb, well: Currently Airbnb has a 10 percent tourist tax for foreign travelers, so that makes the rate even higher. The only way to pay a lower tourist tax for overnight stays is to camp, which will still cost you about $1. Obviously for many travelers, this isn't a viable option — especially if you want to stay in the city center.

The new tax will come into effect on January 1, 2020. According to the city (and as reported by CNN), the tax is not meant to keep tourists away, rather it's meant to keep the city safe and clean for their enjoyment and the comfort of its residents.

Amsterdam, though it now charges the highest tourist tax in Europe, isn't the only city to implement a tourist tax — and, according to some experts, it'll be far from the last. According to Dr. John Fletcher, an economist and professor at Bournemouth University in the United Kingdom, "many of our cities are suffering from increasing numbers of tourists, and this is being compounded by the incessant growth in urbanization. The effect of this is increased pollution and the social costs of overcrowding... charging for adding to congestion and pollution is not new — even small urban areas such as Durham in England, Riga in Latvia have introduced congestion charges, not to mention the major cities such as London," he says. "It would not be surprising to see other cities follow suit."

Other changes to the cities tourism taxes: If you arrive by boat, you'll now have to pay an additional $8 entry fee. The only people excluded from these fees are locals and children under the age of 16.

CNN reports that Amsterdam, a city with only 867,000 residents, has been been struggling for a long time to sustain the 18 million tourists that visit each year.

As it is, there's reason to believe that the overnight tax will continue to increase, and that additional fees will arise to offset the affect of over tourism. The best way to think about it, according to Fletcher, is to remember that the tax also pays for unpriced goods, like "the environment, infrastructure and public services in the destination."

More like this
Expert-Approved Hacks For Packing A Carry On
By Jessica Goodman
Where Was 'The Bachelorette' Season 19 Filmed? More European Destinations Are On The Way
By Radhika Menon
I Tried Float Therapy In Iceland's Blue Lagoon — Here's My Honest Review
By Alexandra Owens
The 12 Best Road Trip Accessories
By Megan Gray
Get Even More From Bustle — Sign Up For The Newsletter