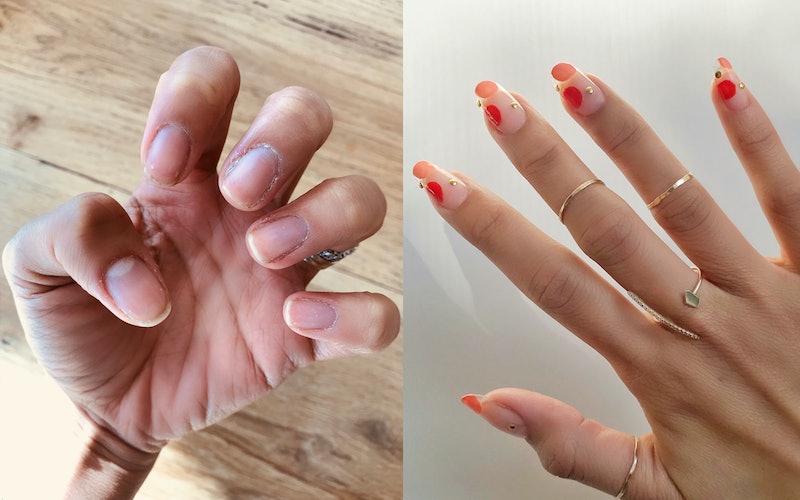 You've heard of acrylics. You've probably tried your fair share of press-on nails. And you've definitely gotten a gel manicure at least once in your life. So, what do you get when you combine all of the best traits about each of these nail treatments into one service? Gel nail extensions. They are made from the same gel that gel polish is made of, add length to your regular nails like a press-on, and are as strong and long-lasting as acrylics, but without the powder or the harsh chemicals. If it sounds too good to be true, it isn't, according to celebrity nail artist Betina Goldstein. Gel nail extensions definitely deserve a spot on your radar.

Goldstein has years of experience creating nail looks for high-fashion campaigns and magazine photo shoots, and while she can do it all — from press-ons to the most intricate of nail art — she won't offer acrylics as an option to her clients. "It is harmful to both the manicurist and the client, and the finished product doesn’t look natural [to me] — I’m all about natural," Goldstein tells Bustle. That's where gel nail extensions come in.

"[Gel nail extensions] are healthier, not only for the person getting them, but for the person doing your nails," Goldstein says, showing me her Aprés Gel-X tips kit. She sometimes wonders why acrylics are still being offered by some salons after the FDA has continued to warn the public about how hazardous the chemicals in them can be. The FDA has even banned some of the chemicals that can be found in acrylic nail solutions, like methyl methacrylate, but due to poor regulation in the nail industry, some salons still use products containing it. Other potentially toxic chemicals that can be found in acrylics are toluene and acetonitrile, which can lead to headaches, dizziness, and irritated eyes, skin, and throat.

Gel polish is arguably safer and healthier than acrylics; however, it has been shown to make your nails weaker over time with prolonged use and improper removal. There is also the concern of using a UV lamp to cure the polish, though according to a 2014 study in JAMA Dermatology, the risk of malignant cancer because of nail lamps is low. As a result, many people in in the industry favor gel polish as a way to extend polish life and strengthen nails, Goldstein included. So when she discovered Aprés Nail's gel extensions, she knew it would be her new go-to to add length to her clients' nails.

Beyond being a healthier option for nail lovers, gel nail extensions are easier and quicker to apply, Goldstein notes. They come in a kit with a variety of gel tips in different sizes and widths, so you can pick which gel nail tip best suits your own nails. While they do come in different shapes — square, round, or stiletto — you can cut and shape them however you want.

Here's how it works: A thin layer of a thick, clear gel is used to apply the gel extension to your own nail. After doing so, you'll place your nail, with the gel nail extension on top, underneath the LED light. The gel will act as a bonder, curing underneath the LED light, so that the extension and your nail become one. According to Goldstein, the clear gel product fills in any of the gaps, making the gel nail extension even stronger, similar to an acrylic.

Your gel nail extensions can last up to three weeks, according to Aprés' website, but Goldstein says it should last you as long as a gel manicure would, depending on your natural nail growth. When you're ready to remove your extensions, all you have to do is use foil and acetone to soak them off until they're ready to peel, like you would with gel polish removal.

Another plus? If you're using regular nail polish to paint your gel nail extensions, you can remove and repaint them as much as you want without having to worry about getting them filled, like acrylics. You can maintain the life of your gel extensions at home by cutting and shaping them as they grow out.

But what Goldstein loves most about the gel nail extensions are how natural they look. "It is a better-looking finished product in the end — it looks way more natural [than acrylics]," she says. This is likely due to the fact that you're able to shape them the way that you want and make them as thin as your real nails. What's more, they won't lift the way that acrylics do over time, looking less clunky on your hands.

Before Goldstein could even finish applying the gel nail extensions, I knew I was already obsessed. They felt strong and durable, like acrylics, but as Goldstein noted, are thinner and look more natural — almost like they're my own nails. To top things off, Goldstein created a gorgeous Yayoi Kusama-inspired design using Chanel La Vernis Longwear Nail Color in Espadrilles and Coquillage. She added some gold dots for a minimalist sparkle.

While I rarely do my nails at home (I'm convinced that it's impossible to paint nails evenly outside a nail salon) the gel nail extensions process seems so simple that I am confident even I could do it. Whether or not I do them myself or bring the kit to my nearby nail salon and have a technician do it, one thing is certain — I am definitely getting gel nail extensions again.

You can purchase the entire kit on Aprés Nail's website. To see the process in action, check out the tutorial videos here.

This article was originally published on Jan. 8, 2018