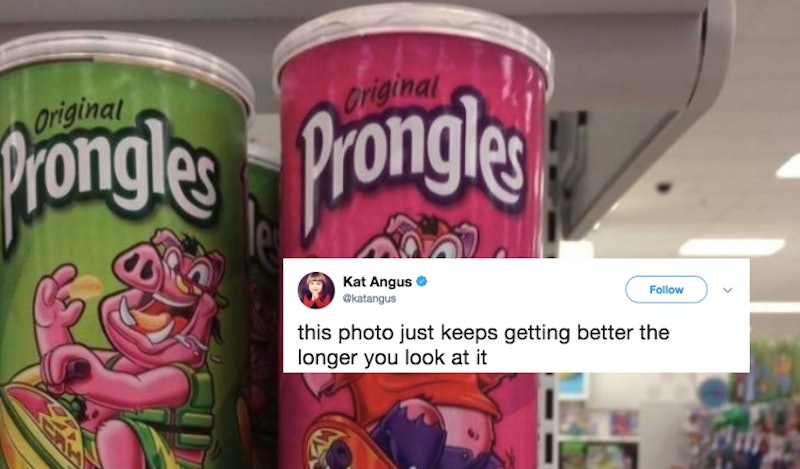 A mystery is afoot. You could even say a mystery is popping. And, of course, "Once you pop, that's great!" — at least, according to Prongles, the mystery chip brand appearing in Target stores across the U.S. Luckily our trusty internet sleuths are at the top of their game, and have uncovered some eye-popping (OK, I'm done) details that suggest Prongles may be connected to Cards Against Humanity.

Update: A representative for Cards Against Humanity confirmed that Prongles are made by the same company to Bustle via email on Nov. 24, claiming that the company is "abandoning its popular card game to focus on breaking into the snack food industry." "We’ve had a lot of success in the games industry, but the future is in snacks," Cards Against Humanity co-creator Ben Hantoot was quoted in the email.

Social media was swamped this week by baffled customers posting about Prongles, a new brand of chip packaged in distinctly Pringles-like cans. Featuring a Teenage Mutant Ninja Turtles-esque boar mascot on its green and pink cans, the chips so far come in two classic, time-tested chip flavors: onions and cream, and salt and potato. No worries about the lack of variety, though; the brand's newly created Twitter may only have three tweets, but Prongles needed just two to share the good news that shrimp and birthday cake flavors are also in the works.

Whether those flavors will see shelves is uncertain. For now, folks are enjoying the sweet taste of hardcore detective work. After some people noticed a few odd details about Prongles, like the fact that they're stocked in the toy section, Reddit user DaveLambert launched an investigation.

Lambert purchased two cans of each flavor and proceeded to rip them apart. Inside were just plain ol' chips, "bad-tasting, too," according to Lambert, and he couldn't find any secrets under the labels. But when he took a closer look at the packaging, he noticed that on both cans, "CAH" had been hidden in the mascot's skateboard.

But the biggest clue Lambert found was his receipt, which showed that Target's system doesn't ring up Prongles as chips, or snacks, or even as food at all. Instead, they ring up as toys — and "CAH card game."

Lambert's sleuthing also uncovered that the chips' universal product code, the same on both cans, is a link to Prongles' official website, and that the site's public domain registration information reveals originalprongles.com is owned by Cards Against Humanity. Other, less pressing connections include Prongles being based in Chicago, which is also Cards Against Humanity's hometown.

If suspicions prove to be true and Prongles is a Cards Against Humanity product, the question is what, exactly, the company intends for them. "[The] point of these cans isn't the contents," Lambert concluded. Judging by the brand's history, there's a possibility the cans have a deeper meaning, but there's also a chance Prongles are literally just chips.

Some folks have theorized that this is another Cards Against Humanity holiday stunt. That wouldn't be surprising, given that its 2017 holiday pack recently sold out with 150,000 orders in nine hours. The pack was announced with the Cards Against Humanity Saves America promotion, and money from the packs will go toward "buying an empty plot of land along the border of the United States and Mexico to make it as expensive and convoluted as possible for Donald Trump to build his wall between the countries," as another Bustler reported.

Whether Prongles is truly a Cards Against Humanity product remains to be seen, but either way, the chips' unique weirdness has certainly brought a little more cheer into the world, and that's great!

More like this
How Long Does Leftover Stuffing Last? Here's When To Toss It
By Chelsey Grasso and Alexis Morillo
16 Friendsgiving Recipes Your Besties Will Love
By Alexis Morillo
How To Score A Free Reusable Holiday Cup At Starbucks
By Alexis Morillo
TikTok’s Viral Tunacado Sandwich Is The Internet’s Favorite Lunch Right Now
By Alexis Morillo
Get Even More From Bustle — Sign Up For The Newsletter